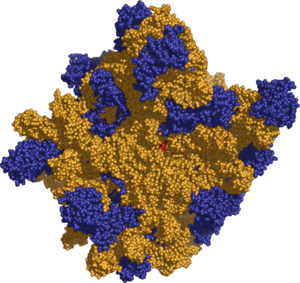 Molecular structure of the 50S subunit of prokaryote cells. Proteins are shown in blue and RNA in orange.

Ribosomal RNA (rRNA) is a type of non-coding ribonucleic acid (RNA) that is a primary and permanent component of ribosomes, the small, cellular particles that form the site of protein synthesis in all living cells. As non-coding RNA, rRNA itself is not translated into a protein, but it does provide a mechanism for decoding messenger RNA (mRNA) into amino acids and interacting with the transfer RNAs (tRNAs) during translation by providing peptidyl transferase activity.

The formation of proteins by rRNA, mRNA, and tRNA is remarkably complex, involving transcription of the various RNAs from DNA, the movement of RNA within a cell, different types of rRNA, and the process of assembling the amino acids in a precise order. And yet this coordinated activity goes on continually in cells, with a single MRNA making several hundred proteins per hour and many thousands of protein molecules per cell generation. With each mammalian cell having millions of ribosomes, and with the human body having many trillions of cells, it is striking to consider how massive, complex, and intricately coordinated is this process of producing proteins for the human body.

The protein manufacturing unit of all living cells, the ribosome, is composed of ribosomal RNA and protein. It is at the site of the ribosome that messenger RNA's (mRNA) code for linking amino acids together to form new proteins and where transfer RNAs (tRNA) transfer specific amino acids to the growing polypeptide chain during the translation of the mRNA into a protein. The chemical blueprint for the protein product is provided by the mRNA, derived from the DNA genes.

A ribosome can be thought of as a giant enzyme that builds proteins. Its enzymatic activity derives from the presence of the ribosomal RNA (rRNA), which performs the catalytic processes for the synthesis. Meanwhile, the protein portions of the ribosome support the function of the rRNA. More than half the weight of a ribosome is RNA (Alberts et al. 1989).

There are numerous ribosomes in cells—as many as 10 million in a single mammalian cell. Such a cell would need to construct ten million copies of each type of ribosomal RNA molecule. While proteins are rapidly constructed, because each of the many mRNA molecules transcribed from the gene may be translated into as many as 10 protein molecules per minute, and 10,000 protein molecules per mRNA molecule in each cell generation, synthesis of rRNA is not so amplified since these molecules are the final gene product (Alberts et al. 1989). However, adequate rRNA is produced because cells contain multiple copies of the genes that code for rRNA (rRNA genes) (Alberts et al. 1989). E. coli contain seven rRNA genes and human cells contain more than 200 rRNA genes per haploid genome (Alberts et al. 1989).

Ribosomes are composed of two subunits, named for how rapidly they sediment when subjected to centrifugation. tRNA is sandwiched between the small and large subunits and the ribosome catalyzes the formation of a peptide bond between the two amino acids that are contained in the tRNA.

A ribosome also has 3 binding sites called A, P, and E.

A single mRNA can be translated simultaneously by multiple ribosomes.

Prokaryote versus eukaryote ribosomes and rRNA

While the ribosomal subunits are quite similar between prokaryotes and eukaryotes, the 70S ribosomes contain proportionally more RNA than protein, while the 80S ribosomes are composed of less RNA than protein. For example, pea seedlings ribosomes have about 40 percent rRNA and 60 percent protein, while E. coli ribosomes contain 63 percent rRNA and 37 percent protein. In comparing the two subunits themselves, the proportions of rRNA and protein are approximately equal.

The 3' end of the 16S rRNA (in a ribosome) binds to a sequence on the 5' end of mRNA called the Shine-Dalgarno sequence.

The 18S rRNA in most eukaryotes is in the small ribosomal subunit, and the large subunit contains three rRNA species (the 5S, 5.8S and 28S rRNAs).

The bacterial 16S, 23S, and 5S rRNA genes are typically organized as a co-transcribed operon. There may be one or more copies of the operon dispersed in the genome, such as the seven of Escherichia coli. Archaea contains either a single rDNA operon or multiple copies of the operon. In contrast, the rRNA genes of eukaryotes generally involves many copies of the genes organized in tandem repeats; for example, in humans, there are approximately 300–400 rDNA repeats present in five clusters (on chromosomes 13, 14, 15, 21, and 22) (Lafontaine and Tollervey 2001).

Translation is the net effect of proteins being synthesized by ribosomes, from a copy (mRNA) of the DNA template in the nucleus. One of the components of the ribosome (16s rRNA) base pairs complementary to a sequence upstream of the start codon in mRNA.

In addition to their enzymatic role in the synthesis of proteins, ribosomal RNA has important applications in medicine and in evolutionary biology.

In medicine, the difference between prokaryote and eukaryote ribosomes are exploited to create antibiotics to destory a bacterial infection without damaging the cells of an infected person. For example, bacterial 70S ribosomes are vulnerable to chloramphenicol, while the eukaryotic 80S ribosomes are not vulnerable. Ribosomal RNA is the target of such clinically relevant antibiotics as erythromycin, kasugamycin, micrococcin, paromomycin, chloramphenicol, spectinomycin, streptomycin, and thiostrepton.

In evolutionary biology, ribosomal RNA is considered the most conserved (least variable) gene in all cells (Smit et al. 2007). (The proteins in ribosomes have been poorly conserved (Alberts et al. 1989).) For this reason, genes that encode the rRNA (rDNA) are sequenced to identify an organism's taxonomic group, calculate related groups, and estimate rates of species divergence. As a result, many thousands of rRNA sequences are known and stored in specialized databases such as RDP-II (Cole et al. 2003) and the European SSU database (Wuyts et al. 2002).