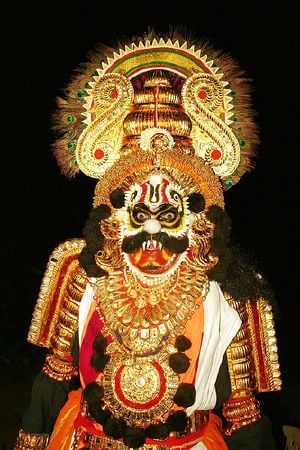 Rakshasa, or the demon, as depicted in popular folk art in Karnataka, India.

A Rakshasa (Sanskrit: रा॑क्षसः, rā́kṣasaḥ; alternately, raksasa or rakshas) is a demon or unrighteous spirit in Hindu mythology. Rakshasas are also called man-eaters ("Nri-chakshas," "Kravyads") or cannibals. A female rakshasa is called a rakshasi, and a female rakshasa in human form is a manushya-rakshasi.

According to the Ramayana, rakshasas were created from Brahma's foot; other sources claim they are descended from Pulastya, or from Khasa, or from Nirriti and Nirrita.[1] Legend has it that many rakshasas were particularly wicked humans in previous incarnations. Rakshasas are notorious for disturbing sacrifices, desecrating graves, harassing priests, possessing human beings, and so on.[2] Their fingernails are venomous, and they feed on human flesh and spoiled food. They are shape changers, illusionists, and magicians.

Rakshasas in the Mahabharata

In the world of the Mahabharata, rakshasas are a frequently encountered as a populous race of supernatural humanoids who tend generally toward evil. Powerful warriors, they resort easily to the use of magic and illusion when unsuccessful with conventional weapons. As shape changers, they can assume various physical forms, and it is not always clear whether they have a true or natural form. As illusionists, they are capable of creating appearances which are real to those who believe in them or who fail to dispel them. Rakshasas are cannibals, and frequently make their gleeful appearance when the slaughter on the battlefield is at its worst. Occasionally they serve as rank-and-file soldiers in the service of various warlords.

Aside from its treatment of unnamed rank-and-file rakshasas, the epic tells the stories of certain members of the race who rose to prominence, some of them as heroes, most of them as villains.

Rakshasas who fought at the Battle of Lanka 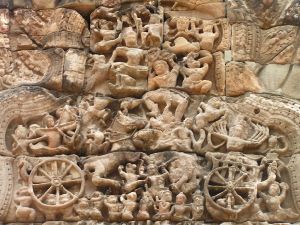 A bas-relief at Preah Khan in Cambodia depicts the Battle of Lanka between rakshasas and monkeys.

The Battle of Lanka pitted an army of rakshasas under Ravana against an army of Vanaras, or monkeys, under Rama and Sugriva.

The Pandava hero Bhima was the great nemesis of forest-dwelling rakshasas who dined on human travelers and terrorized human settlements.

Rakshasas who fought at the Battle of Kurukshetra

Rakshasa heroes fought on both sides in the Battle of Kurukshetra.

Artistic and folkloric depictions of rakshasas

Depictions of rakshasas at Angkor in Cambodia

Retrieved from https://www.newworldencyclopedia.org/p/index.php?title=Rakshasa&oldid=1090870
Categories:
Hidden category:
This page was last edited on 8 December 2022, at 00:11.
Content is available under Creative Commons Attribution/Share-Alike License; additional terms may apply. See Terms of Use for details.