Rajendra Chola I, the son of Rajaraja Chola I, the great Chola king of South India, succeeded his father in 1014 C.E. as the Chola emperor. During his reign, he extended the influences of the already vast Chola empire to the banks of the river Ganges in the north and across the ocean. Rajendra’s territories extended to coastal Burma, the Andaman and Nicobar Islands, Lakshadweep, Maldives, conquering the kings of Srivijaya (Sumatra, Java, and Malaya in South East Asia) and the Pegu islands with his fleet of ships. He defeated Mahipala, the Pala king of Bengal and Bihar.

To commemorate his victory, he built a new capital called Gangaikonda Cholapuram. Tamil Chola armies exacted tribute from Thailand and the Khmer kingdom of Cambodia. Rajendra stood as the first Indian king to take his armies overseas. He also built a temple for Siva at Gangaikonda Cholapuram, similar in design to the Tanjore Brihadisvara temple built by Rajaraja Chola. He assumed titles Parakesari and Yuddhamalla.

Rajaraja Chola I had made the crown prince Rajendra Co-Regent in 1012 C.E. Both Son and Father reigned as equals during the final few years of Rajaraja’s life. Rajendra lead from the forefront of some of Rajaraja’s campaigns, such as those against Vengi and Kalinga towards the end of his reign.

Rajendra formally ascended the Chola throne in 1014 C.E., two years after his installation as the Co-Regent. Early in his reign in 1018 C.E., he installed his eldest son, Rajadhiraja Chola I, as yuvaraja (Co-Regent). Rajadhiraja continued to rule beside his father for the next 26 years. The son ruled in as full regal status as the father. That practice may have been adapted initially to obviate disputed succession.

The system of choosing a successor in the lifetime and associating him in the discharge of administrative duties represented an important aspect of Chola administration. The princes who had come of age had been appointed in various positions of authority in the different provinces of the empire according to the individuals to aptitude and talent. Those who distinguished themselves in those positions could be chosen as heir apparent. In some cases, a more talented younger could win the nod over the eldest son.

Rajendra’s inscriptions include the many campaigns he carried on behalf of Rajaraja from c. 1002 C.E. Those include the conquest of the Rashtrakuta country and region around the current northwestern Karnataka state. Rajendra also led campaigns against the Western Chalukya Satyasraya and crossed the river Tungabhadra, carried the war into the heart of the Chalukya country and attacked their capital.

To complete the task begun by his father, of conquering the island of Srilanka, Rajendra invaded the island in 1018 C.E. As a result of the campaign, Rajendra claimed to have captured the regal jewels of the Pandya kings, which Parantaka I tried in vain to capture. Rajendra also captured the crown of the sinhala king, his Queen and daughter. He took the Sinhala king Mahinda V prisoner, transporting him to the Chola country where he remained a prisoner for over twelve years, dying in captivity. Mahavamsa gives a graphic illustration of the carnage wrought by the pillaging Chola army in the Sinhala country, claiming the invading army destroyed monasteries seeking treasure. Chola inscriptions, silent regarding the details of this campaign, draw a veil over the pillage.

Mahinda’s son Kassapa became the center of Sihalese resistance against the Tamil Power. The war between the Cholas and the Sinhalese raged for over six months in which a great number of Tamils died. At the end of the battle, Kassapa managed to drive out the Chola army from the southeast corner of the island and ruled as Vikramabahu I. Remains of a number of Hindu temples have been discovered around the Polonnaruwa area attesting to the presence of the Tamil army.

In 1041 C.E., Rajendra lead another expedition into Sri Lanka to quell the continuing attacks against the Chola army by Vikramabahu. Vikramabahu died soon after and anarchy reigned outside the Chola territories. An assortment of adventurers including Sinhalese, dispossessed Pandya princes and even a certain Jagaitpala from distance Kanauj asserted authority over portions of the island. The Chola army had to fight and defeat them all.

Also in 1018, Rajendra made a triumphal march at the head of his army through the Pandya and Cheras (Kerala) countries. Rajendra’s Tiruvalangadu grants claim that he "took possession of the bright spotless pearls, seeds of the fame of the Pandya kings" and that "…the fearless Madurantaka (Rajendra) crossed the mountains and in a fierce battle brought ruin upon the Chera kings. Rajendra unlikely added additional territory to his empire through those campaigns as these have already been conquered by Rajaraja at the beginning of his reign. Rajendra appointed one of his sons as viceroy with the title Jadavarman Sundara Chola-Pandya, with Madurai as the headquarters of the Vice royalty.

Rajendra had to turn his attention towards the Western Chalukyas c. 1021. In 1015, Jayasimha II became the Western Chalukya king. Soon after his ascension, he tried to recover the losses suffered by his predecessor Satyasraya in the hands of the Cholas. Initially he met with success as Rajendra focused on his campaigns against the Pandyas and in Srilanka.

Jayasimha also decided to involve himself in the affairs of the Eastern Chalukyas of Vengi. After the demise of the Vengi king Vimaladitya, Jayasimha threw his support behind Vijayaditya VII against the claims of Rajaraja Narendra, another of Vimaladitya’s sons by the Chola princess Kundavai. Rajendra naturally had his affinity towards Rajaraja, his nephew (for Kundavai had been Rajendra’s sister). A civil war ensued between Vijayaditya and Rajaraja. Rajraja Narendra soon defeated the forces of Vijayaditya with the help of Rejendra.

Rajendra’s forces met Jayasimha in the western front and defeated him in the battle of Maski. Rajendra failed to pursue Jayasimha beyond the southern banks of the Tungabhadra river. Rajaraja Narendra had his long delayed coronation in Vengi after the return of the triumphant expedition to the Ganges in 1022 C.E. and Rajendra gave his daughter Ammanga in marriage to Rajaraja.

In 1031 C.E., the western Chalukyas invaded Vengi and drove Rajaraja Narendra into exile and installed Vijayaditya as the Vengi king. Rajaraja once again sought Chola help in regaining his throne. The Chola army invaded the Vengi and in a bloody battle near Kalidandi, managed to push back Vijayaditya and his western Chalukya ally. Rajaraja Narendra managed to regain his throne in 1035 C.E.

Expedition to the Ganges

With both the Western and Eastern Chalukya fronts subdued, Rajendra’s armies undertook an extraordinary expedition. Around 1019 C.E., Rajendra’s forces continued to march through Kalinga to the river Ganges. The Emperor himself advanced up to the river Godavari to protect the rear of the expeditionary force. The Chola army eventually reach the Pala kingdom of Bengal where they met Mahipala and defeated him.

According to the Tiruvalangadu Plates, the campaign lasted less than two years in which many kingdoms of the north felt the might of the Chola army. The inscriptions further claim that Rajendra defeated "…the armies of Ranasura and entered the land of Dharmapala and subdued him and thereby he reached the Ganges and caused the water river to be brought by the conquered kings" back to the Chola country.

Rajendra's army defeated the kings of Sakkarakottam and Dhandabhukti and Mahipala, yet evidence that he added those territories to the kingdom permanently has never been found. Undoubtedly, his campaign projected an exhibition of the power and might of the Chola empire to the northern kingdoms.[1]

Historians can find no contemporary records to explain the nature of and the reason for that naval expedition. The Sailendra dynasty had been in good relations with the Chola Empire during the period of Rajaraja Chola I. Rajaraja encouraged Mara Vijayatungavarman to build the Chudamani Vihara at Nagapattinam. Rajendra confirmed that grant in the Anaimangalam grants showing that the relationship with Srivijaya still continued to be friendly. Historians lack knowledge of the exact cause of the quarrel that caused the naval war between Cholas and Srivijaya.

The Cholas had an active trade relationship with the eastern island. Moreover, the Srivijaya kingdom and the South Indian empires had been the intermediaries in the trade between China and the countries of the Western world. Both the Srivijaya and Cholas had active dialog with the Chinese and sent diplomatic missions to China. The Chinese records of the Song Dynasty show that first mission to China from Chu-lien (Chola) reached that country in 1015 C.E. and the king of their country had been Lo-ts’a-lo-ts’a (Rajaraja). Another embassy from Shi-lo-cha Yin-to-loChu-lo (Sri Raja Indra Chola) reached China in 1033 C.E., and a third in 1077 C.E., during Kulothunga Chola I. The commercial intercourse between Cholas and the Chinese had been continuous and extensive.

One reason for the invasion could have been a trade dispute stemming from some attempts by Srivijaya to throw some obstacle between the flourishing trade between China and the Cholas. Whatever the actual cause of that expedition, the campaign led to no permanent territories, only a vague acceptance of the Chola suzerainty by Srivijaya. Sangaram Vijayatungavarman reclaimed his throne at his agreement to pay periodic tribute to Rajendra. Tanjavur inscriptions also state that the king of Kambhoja (Kampuchea) requested Rajendra’s help in defeating enemies of his Angkor kingdom.

Rajendra’s long reign saw almost continuous campaigns and conflicts trying to hold his huge empire together. Rajendra’s sons carried out most of the campaigns during the late period of his reign. The emperor refrained from taking the field personally, allowing his sons to win glory and distinction. Rebellions in the Pandya and Kerala countries called for severe action and Rajadhiraja Chola I suppressed them. He also undertook a campaign in Sri Lanka to quell a rebellion instigated by Kassapa. 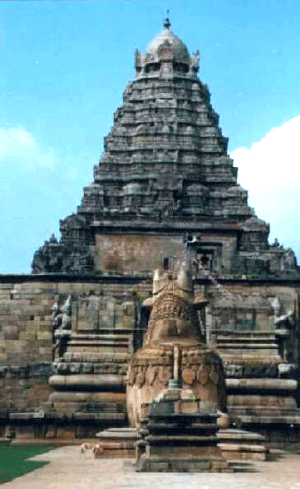 Most of the Chola kings who succeeded Rajendra had been crowned in Gangakkondacholeswaram. They retained it as their capital, reoriented and trained the efficient Chola army. The reason for moving the capital to the new location could hardly have been for strategic purposes, as the old capital Thanjavur had impregnable fortifications.

The closing years of Rajendra's rule forms the most splendid period of Cholas. The extent of the empire grew to its widest, while military and naval prestige reached its highest. The emperor's sons, and other members of his family, ably assisted him. The Chola imperialism had been a benevolent one, attested by the presence of the traditional rulers in the Pandya and Kerala countries and the act of reinstating the Srivijaya king after his defeat.

Rajendra had many queens. Some of them mentioned in inscriptions included Tribuvana or Vanvavn Mahadeviar, Mukkokila, Panchavan Mahadevi, and Viramadevi who committed sati on Rajendra’s death. Of his sons, three followed him on the Chola throne in succession: Rajadhiraja Chola, Rajendra Chola II and Virarajendra Chola. Of Rajendra’s daughters, historians know of Arulmolinangayar and Ammangadevi, who married Eastern Chalukya king Rajaraja Narendra, and the mother of Kulothunga Chola I, the first Chalykya Chola monarch.

Retrieved from https://www.newworldencyclopedia.org/p/index.php?title=Rajendra_Chola_I&oldid=1090869
Categories:
This page was last edited on 8 December 2022, at 00:10.
Content is available under Creative Commons Attribution/Share-Alike License; additional terms may apply. See Terms of Use for details.