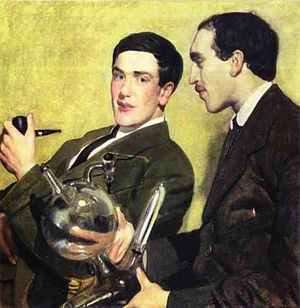 Semenov (on the right) and Kapitsa (on the left), portrait by Boris Kustodiev, 1921

Pyotr Leonidovich Kapitsa (Russian Пётр Леонидович Капица) (July 9, 1894 – April 8, 1984) was a Russian physicist who discovered super-fluidity with contribution from John F. Allen and Don Misener in 1937. He was awarded honorary degrees from such Universities as Paris, Columbia and Delhi, among others. He won the Nobel Prize for Physics in 1978. He also received many medals and memberships of academic societies. He was under house imprisonment for many years when he declined to conduct research on the military application of atomic energy, losing favor with Josef Stalin. Later, after he had been re-appointed head of the Institute for Physical Problems, he courageously used his own prestige to protest against the way in which the Soviet system tied science with its own ideology. He refused to sign a letter denouncing the dissident scientist and human rights activist, Andrei Sakharov and was an active campaigner for peace and disarmament. When he died in I984, he was the only member of the presidium of the Soviet Academy of Sciences who was not a member of the Communist Party. To have achieved such eminence in the Soviet Union without party membership was of itself a remarkable accomplishment. Instead of remaining neutral, this scientist occupied the moral high ground and refused to be intimidated by a totalitarian government and dared to risk personal censure by speaking up on behalf of friends and colleagues.

Kapitsa was born in the city of Kronstadt, Russia and was a son of military engineer Leonid Petrovich Kapitsa, and Olga Stebnitskaya, educator and folklore researcher. He graduated from the Petrograd Polytechnical Institute in 1918, after publishing his first works in "Russian Society of Phisics and Chemistry Journal."

At the suggestion of A.F. Ioffe in 1921, he travelled to the England as committee member for the purpose of restoration of scientific contacts, acquiring equipment and literature. In England, he worked in the Cavendish Laboratory in Cambridge with Ernest Rutherford for over 10 years. Between 1923 and 1926, he was a Clerk Maxwell Student of Cambridge University, and from 1924 until 1932 he was Assistant Director of Magnetic Research at Cavendish Laboratory. In 1929, he was appointed the Messel Research Professor of the Royal Society, and was the first director of the Mond Laboratory from 1930 to 1934. During this period, he originated techniques for creating ultra-strong magnetic fields by injecting high currents into specially constructed air-core electromagnets for brief periods of time. In 1934, he developed a new and original apparatus for producing significant quantities of liquid helium, based on the adiabatic principle.

During his work in England he was requested numerous times by Soviet officials to return to USSR as his place of residence. However, the decision to return to the USSR was constantly postponed because he was benefitting from the freedom of travel that he enjoyed as long as he remained in the West.

In 1934, during a professional visit to the Soviet Union with his wife, Kapitsa's international passport was revoked and he was not permitted to leave the country. He was required to form the Institute for Physical Problems using equipment purchased by the Soviet Government from the Mond Laboratory in Cambridge with the assistance of Rutherford, who cooperated with this venture once it became clear that Kapitsa would not be permitted to return to England. Kapitsa's children then joined him and his wife in the USSR.

During World War II Kapitsa was engaged in applied research on the production and use of oxygen, which was vital for metallurgy. The oxygen was produced by using low pressure expansion turbines, which he had invented earlier to produce liquid air. He also organized the Department of Oxygen Industry which was affiliated with the USSR Council of Ministers.

In August 1946, Kapitsa was removed from his role as head of the Institute for Physical Problems that he had created, and exiled to his dacha (summer house) near Moscow, due to his refusal to participate in the Soviet Hydrogen Bomb project. In a letter to Stalin, Kapitsa described the project's leader, Lavrenty Beria, as "like the conductor of an orchestra with the baton in hand but without a score." In 1955, soon after Stalin's death he regained his position and remained director of the institute until his own death in 1984. In 1951, he co-founded the Moscow Physics-Technical Institute. Kapitsa won the Nobel Prize in Physics in 1978 for his work in low-temperature physics. He shared the prize with Arno Allan Penzias and Robert Woodrow Wilson (who won for unrelated work).

In his old age, he used his prestige to criticize the Soviet policy of judging scientific problems on ideological grounds. With other Soviet scientists, he campaigned to protect Lake Baikal from the treat of industrial pollution that would have been inevitable following construction of a new pulp and paper plant. Together with Andrei Sakharov and others he campaigned against forced detention of biologist Medvedev in a mental institution, which was a common Brezhnev treatment for free thinking intelligentsia. When Sakharov fell out of favor, Kapitsa refused to sign a public letter disgracing him. In 1962, he helped denouce Trofim Lysenko the pseudo-scientist who has caused the deaths of hundreds of Soviet scientists. About ten years before the Chernobyl disaster, analyzing the "Browns Ferry" accident, Kapitsa tried to warn the scientific and official circles of the danger of human mistakes in nuclear power plant. He was also active in the Pugwash movement for peace and disarmament, a series of international conferences aimed to channel scientific research into constructive purposes.

At his death in 1984, he was the only member of the presidium of the Soviet Academy of Sciences who was not a member of the Communist Party.

Kapitza resistance is a resistance to the flow of heat across the interface between liquid helium and a solid that produces a temperature discontinuity.

August 6, 1916, he married Nadezhda Chernosvitova. With her, he had son and daughter. However, during the winter of 1920, he lost his father, wife, and both children to the flu epidemic.

In April 28, 1927, he married to Anna Krylova, daughter of Academician and shipdesigner A.N. Krylov. They had two sons, Sergei and Andrei. Sergei is the co-founder editor of the International Series of Monographs on Physics (Oxford, Clarendon Press) with R.H. Fowler.

February 12, 1937, he sent a letter to Stalin to intercede on behalf of physicist theorist V.A. Fok, who had been arrested in Leningrad. Fok was released few days later.

April 6, 1938, he sent a letter to V. M Molotov (1890-1986) Stalin's deputy and April 28, to Stalin to intercede for Lev Landau who had been arrested on allegations of espionage for Nazi Germany. Lev Landau was director of the Theoretical Department of the Institute for Physical Problems. Finally, on April 28, 1939, Kapitsa personally went to the Kremlin and threatened to retire from the position of head of the Institute for Physical Problems. The same day, Landau was released.

In addition to the continued value of his scientific legacy, Kapitsa's refusal to compromise his own moral integrity and beliefs for the sake of either personal advancement or to avoid political censure is an example worthy of emulation. His years under house arrest may have damaged his career by removing him from the scientific community, but he was still able to win the Noble Prize despite this break in his research. Outspoken as an advocate of open scientific thought in the USSR, he deserves to be remembered as a staunch supporter of academic freedom as well as for his scientific achievements.

Retrieved from https://www.newworldencyclopedia.org/p/index.php?title=Pyotr_Kapitsa&oldid=1090766
Categories:
Hidden category:
This page was last edited on 7 December 2022, at 03:36.
Content is available under Creative Commons Attribution/Share-Alike License; additional terms may apply. See Terms of Use for details.