Port Arthur is a small town and former penal colony on the Tasman Peninsula in Tasmania, Australia. It is considered one of the country's most significant heritage areas and Tasmania's top tourist attraction. It is located approximately 60 kilometers (37 mi) southeast of the state capital, Hobart. It is known for its harsh conditions, dark history and stark beauty.

From a distance Port Arthur looks idyllic - beautiful buildings amid lush greenery and beautifully landscaped gardens. This setting, however, belies a dark history. The British Empire founded Port Arthur as a penal colony, which functioned as such for nearly 50 years. Port Arthur was also the site of the "Separate Prison" - sometimes known as The Model Prison - which served as a model of prison reform, implementing psychological rather than physical methods of punishment.

Created with convict labor, the impressive architecture, delightful gardens, and chilling prison facilities not only survive but have been restored with the support of the government.

Tasmania is an Australian island and a state of the same name, separated from the Australian mainland by the Bass Strait, a 240 kilometers (150 mi) wide stretch of water. Tasmania is known for its extreme natural beauty with spectacular mountain, lake, and coastal scenery. Nearly 37 percent of the state is protected in Nature Reserves and National Parks, including more than one fifth which is designated as UNESCO World Heritage Sites.

A settlement was established by Captain David Collins in 1804, in Sullivan's Cove in the estuary of the Derwent River on the island's southeast coast. This settlement became known as Hobart Town or Hobarton, later shortened to Hobart, now the state capital. Port Arthur is located approximately 80 kilometers (50 mi) southeast of Hobart. At the 2006 census, Port Arthur and the surrounding area had a population of 499. 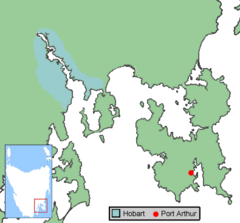 A postcard depicting a convict team plowing a farm at Port Arthur. Dated 1926. 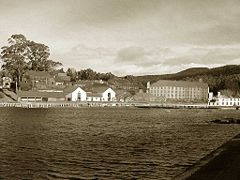 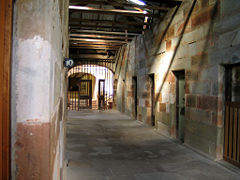 Port Arthur was named after Van Diemen's Land lieutenant governor George Arthur. The settlement started as a timber station in 1830, but it is best known for being a penal colony.

From 1833 until the 1850s, it was a destination for the hardest of convicted British and Irish criminals, those who were secondary offenders having re-offended after their arrival in Australia. Rebellious personalities from other convict stations were also sent here, a quite undesirable punishment.

The period from settlement in 1830, to 1840, consisted of the penal station being hacked from the bush and industries established. Ship building, shoemaking, smithing, timber and brick making enterprises were begun. During the 1840s there was a consolidation of the industrial and penal nature of the settlement as the convict population reached over 1100. In 1842 a huge flour mill and granary was begun, as well as the construction of a hospital. Later that year bricks were laid for the penitentiary.

The "Separate Prison" of Port Arthur, based upon the model of Pentonville prison in London, was begun in 1848. The 80 cell prison was built in the shape of a cross with radial exercise yards around a central hall and chapel.[2] Port Arthur also expanded geographically at this time as the convicts pushed further into the encircling hills to extract the valuable timber. The transition to the Separate Prison system brought a shift in punishment from physical to psychological methods. It was believed that the hard corporal punishment, such as whippings, used in other penal stations only served to harden criminals, and did nothing to turn them from their immoral ways. Under this system of punishment the "Silent System" was implemented in the building. Here prisoners were hooded and made to stay silent, this was intended to allow time for the prisoner to reflect upon the actions which had brought him there. In many ways Port Arthur was the pin-up for many in the penal reform movement, despite shipping, housing and slave-labor use of convicts being as harsh, or worse, than others stations around Australia.

Port Arthur had some of the newest and strictest security measures of the Australian penal system. It was secured naturally by shark-infested waters on three sides. The 30 meters (98 ft) wide isthmus of Eaglehawk Neck that connected it to the mainland was crossed by fences and guarded by prison guards and dogs. Contact between visiting seamen and prisoners was barred. Ships were required to check in their sails and oars upon landing to prevent any unnotified leavings. In 1836, a tramway was established between Taranna and a jetty in Long Bay, north of Port Arthur. The sole means of propulsion was convicts.[3]

Port Arthur was also the destination for juvenile convicts, receiving many boys, some as young as nine years of age, arrested for stealing toys. The boys were separated from the main convict population and kept on Point Puer, the British Empire's first boys' prison. Like the adults, the boys were used in hard labor such as stone cutting and construction. One of the buildings constructed was one of Australia's first non-denominational churches, built in a gothic style. Attendance of the weekly Sunday service was compulsory for the prison population; critics of the new system noted that this and other measures seemed to have negligible impact on reformation. Despite its badge as a pioneer in the new nicer age of imprisonment, Port Arthur was still as harsh and brutal as other penal settlements. Some critics might even suggest that its use of psychological punishment, compounded with no hope of escape, made it one of the worst.

In 1853 the cessation of transportation resulted in fewer transportees arriving at the station. It did, however, as one of the few secondary punishment stations operating in the colonies, continue to receive a large proportion of colonially sentenced men.

The decades of the 1850s and 1860s were active ones, as authorities attempted to make the station economically sustainable. Tracts of bush were harvested to feed a burgeoning timber industry and large plots of ground were turned over to cultivation. In 1857 the old flour mill and granary were converted into additional prison cells. A large range of workshops housing a steam-driven sawmill, blacksmith and forge, and carpentry workshop were built adjacent to this. In 1864 the Asylum was begun, the final project of Port Arthur. By the 1870s the number of convicts dwindled, those remaining behind were too aged, infirm or insane to be of any use. The last convict was shipped out in 1877 and the prison closed.

The 'Island of the Dead' was the destination for all who died inside the prison camps. Of the 1,646 burials recorded, only 180, those of prison staff and military personnel, are marked. Today these mass graves attract tourists, who overwhelming describe the air about the small bush-covered island as possessing "melancholic" and "tranquil" qualities. 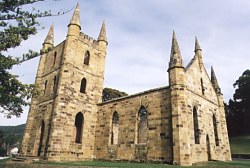 After the closure of the penal colony the site was renamed to "Carnavon." During the 1880s the land in and around the site was sold off to the public and a community was established. Devastating fires tore through the area in 1895 and 1897 gutting the old penitentiary, separate prison and hospital. This led to the establishment of the new town, including a post office,cricket club, lawn tennis club, and other facilities.

Tourism began nearly as soon as the last convicts had left, supplying the new residents with a source of income, part of its undoubtedly due to its unsavory past, and the ghost stories that accompany it. The original jetty was extended to accommodate the rapidly increasing numbers of tourists. 1916 saw the establishment of the Scenery Preservation Board which took the management of Carnavon out of the hands of the locals. In 1927 tourism had grown to the point where the area's name was reverted back to Port Arthur. By the 1920s and 1930s the Port Arthur area had three hotels and two museums.

In the 1970s management of the site transferred from the Scenery Preservation Board to the National Parks and Wildlife Service. The Tasmanian and Federal Governments committed to a seven-year conservation and development program. In 1979 funding was received to preserve the site as a tourist destination, due to its historical significance. The "working" elements of the Port Arthur community such as the post office and municipal offices were moved to nearby Nubeena. Several magnificent sandstone structures, built by convicts working under hard labor conditions, were cleaned of ivy overgrowth and restored to a condition similar to their appearance in the 19th century. Buildings include the "Model Prison," the Round Tower, the church, and the remnants of the main penitentiary. The buildings are surrounded by lush green parkland.

In 1987 the Port Arthur Historic Site Management Authority received jurisdiction of the site. Additional funding for conservation work provided by the Tasmanian Government has allowed numerous infrastructure, interpretation and archaeological works, including the institution of annual summer archaeological and architectural programs.

A distinct section of the Port Arthur Historic Site is the Government Gardens. They were originally established in the late 1830s as an outdoor leisure space for civilian and military officials, and survived until well after the closure of the settlement in 1877.

The gardens have been reconstructed according to an 1858 survey. Extensive research of historic photographs, soil analysis and archaeological investigations were conducted. Plant species, paths, fences, fountains and other landscape features were restored.

There are two formal gardens dating from the convict period: the Government Cottage Gardens and the Commandant's Garden. Certain elements from the post-convict period were retained, such as the rows of mature oaks along the fence line and up the path to the church, adding a major visual and aesthetic contribution to the overall landscape significance of the Site.

Panorama of the Port Arthur site