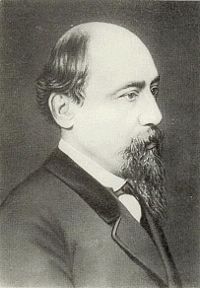 Nikolay Alexeyevich Nekrasov (Russian: Никола́й Алексе́евич Некра́сов, December 10 [O.S. November 28] 1821 – January 8 1878 [O.S. December 28, 1877]) was a Russian poet, best remembered as the long-standing publisher of Sovremennik (The Contemporary) (from 1846 until July 1866). The Contemporary was begun by Alexander Pushkin, but it was Nekrasov who made it financially profitable, until it was shut down by the government in connection with the arrest of its then editor, the radical Nikolai Chernyshevsky. Later, together with Mikhail Saltykov-Shchedrin, he published the Otechestvenniye Zapiski (Notes from the Fatherland), a successor literary journal to the Sovremennik.

During his childhood near the banks of the Volga River, he observed the hard labor of the Russian barge haulers. This image of social injustice, so similar to Dostoevsky's childhood recollection of a beaten courier, was compounded by the behavior of his tyrannical father. The latter's drunken rages against both his peasants and his wife determined the subject matter of Nekrasov's major poems—a verse portrayal of the plight of the Russian peasant, in the peasant's voice.

Nekrasov was born the son of a petty Russian officer and a Polish gentrywoman. He grew up on his father's estate, Greshnevo, in Yaroslavl province. He was a poor student, reaching only the fifth grade at his local gymnasium. In 1838 his father, bent on a military career for his son, sent the 16-year-old Nekrasov to Petersburg for officer training. He quickly lost interest in the military academy and came in contact with students there, including a friend from his school days. He was encouraged to study for the university entrance exams. Though failing to score high enough to be admitted as a full-time student, he was able to audit classes, which he did from 1839 to 1841. Having quit the army in favor of his studies, Nekrasov's father stopped sending him money, and Nekrasov lived in extreme want, briefly living in a homeless shelter. Shortly thereafter Nekrasov authored his first collection of poetry, Dreams and Sounds, published under the name "N. N." Though the poet V. A. Zhukovsky expressed a favorable opinion of the beginner's work, it was promptly dismissed as Romantic doggerel by V. G. Belinsky, the most important Russian literary critic of the first half of nineteenth century, in his Отечественные Записки (Notes of the Fatherland). Nekrasov personally went to the booksellers and removed all the copies of the failed collection.

Ironically, Nekrasov joined the staff of Notes of the Fatherland with Belinsky in the early 1840s and became close friends with the critic. From 1843–1846 Nekrasov edited various anthologies for the journal, one of which, "A Petersburg Collection," included Dostoevsky's first novel, Poor Folk. At the end of 1846, Nekrasov acquired The Contemporary from Pyotr Pletnev. Much of the staff of Notes of the Fatherland, including Belinksy, abandoned Pyotr Krayevsky's journal for Nekrasov's. Before his death, Belinsky granted Nekrasov rights to publish various articles and other material originally planned for an almanac, to be called the Leviathan.

By the middle of the 1850s Nekrasov had become seriously ill. He left Russia for Italy to recover. It was around this time that Chernyshevsky and Nikolai Dobrolyubov, two of the most radical and unabashedly revolutionary writers of the time, became the major critics for the journal. Nekrasov was attacked by his old friends for allowing his journal to become the vehicle for Chernyshevsky's sloppy and often poorly written broadside attacks on polite Russian society. By 1860 I. S. Turgenev, the naysayer of nihilism, refused to have any more of his work published in the journal.

After The Contemporary closed in 1866, Nekrasov obtained from his old enemy Kraevsky ownership of Notes of the Fatherland. He achieved new success with the journal.

In 1877 Nekrasov, never very healthy, became ill for the last time. He then composed his Last Songs, filled with the agony of the shriveled and now dying poet.

Despite biting frost, his funeral was attended by many. Dostoevsky gave the keynote eulogy, noting that Nekrasov was the greatest Russian poet since Pushkin and Lermontov. A section of the crowd, youthful followers of Chernyshevsky who connected the verse of the deceased poet with the revolutionary cause, chanted, "No, greater!"

Nekrasov's poetry demonstrated his concern especially for the plight of the peasants. His most important work was Кому на Руси жить хорошо? (Who is Happy in Russia?) (1873–1876). It tells the story of seven peasants who set out to ask various elements of the rural population if they are happy, to which the answer is never satisfactory. The poem is noted for its rhyme scheme: "[S]everal unrhymed iambic tetrameters ending in a Pyrrhic are succeeded by a clausule in iambic trimeter" (Terras 1992, 319). This scheme resembles a Russian folk song.

Burlaks on the Volga (painting by Ilya Yefimovich Repin, 1870–73)

On the Volga, hark, what wailing
O'er the mighty river floats?
'Tis a song, they say—the chanting
Of the men who haul the boats.

Thou dost not in spring, vast Volga,
Flood the fields along thy strand
As our nation's flood of sorrow,
Swelling, overflows the land.

O my heart, what is the meaning
Of this endless anguish deep?
Wilt thou ever, O my country,
Waken, full of strength, from sleep?

Or, by heaven's mystic mandate,
Is thy fate fulfilled to-day,
Singing thus thy dirge, thy death-song,
Falling then asleep for aye?