Nam June Paik (July 20, 1932 – January 29, 2006) was a South Korean-born American artist. He worked with a variety of media and is considered to be the first video artist.[1] He is considered by some[2] to have been the author of the phrase "Information Superhighway," using it in a Rockefeller Foundation paper in 1974. The phrase began to appear in print occasionally in the mid-1980s (this conclusion is based on date retrieved from a search for publications located by using the keyword 'information superhighway' on www.worldcat.org, which returned no legitimate hits dated before 1984, 8 independent hits dated between 1984 and 1989, 63 hits between 1990 and 1993, and 383 in the year 1994 alone) and was later made popular by Al Gore in the mid 1990s.

Paik is an example of a person who could be described as a creator. What he saw when he looked at the world led him to take physical objects from the world, primarily electronic objects, and create new constructions with them, new visual representations of other objects, such as monuments constructed out of television monitors. Each of his creations challenged his viewers to think in a new way, to consider the absurdity of his combinations, and at the same time, their inevitability.

Born in Seoul, Paik had four older brothers and a father who worked as a textile manufacturer. As he was growing up, he was trained as a classical pianist. In 1950, Paik and his family had to flee from their home during the Korean War. His family first fled to Hong Kong, but later moved to Japan, for reasons unknown. Six years later, he graduated from the University of Tokyo. He wrote a thesis on composer Arnold Schoenberg.

After moving to Germany to study History of Music at Munich University, Paik met the composers Karlheinz Stockhausen and John Cage and the conceptual artists Joseph Beuys and Wolf Vostell, and became interested in working with electronic art. Pre-Bell-Man, statue in front of the 'Museum für Kommunikation', Frankfurt am Main, Germany

Nam June Paik began participating in the Neo-Dada art movement, known as Fluxus, which was inspired by the composer John Cage, and his use of everyday sounds and noises in his music. He made his big debut at an exhibition known as Exposition of Music-Electronic Television, in which he scattered televisions everywhere, and used magnets to alter or distort their images.

In 1964, Paik moved to New York, and began working with classical cellist Charlotte Moorman, to combine his video, music, and performance. In the work TV Cello, the pair stacked televisions on top one another, so that they formed the shape of an actual cello. When Moorman drew her bow across the "cello," images of both her playing, and images of other cellists playing appeared on the screens. In 1965, Sony introduced the Portapak. With this, Paik record things while moving, for it was the first portable video and audio recorder. From there, Paik became an international celebrity, known for his creative and entertaining works.

In a notorious 1967 incident, Charlotte Moorman was arrested for going topless while performing in Paik’s Opera Sextronique. Two years later, in 1969, Moorman and Paik performed TV Bra for Living Sculpture, in which Charlotte wore a bra with small TV screens over her breasts.[3]. Paik developed the idea of an "Electronic Superhighway" as early as 1974, in his text, "Media Planning for the Postindustrial Society."[4] Many of Paik's early works and writings are collected in a volume edited by Judson Rosebush titled, Nam June Paik: Videa 'n' Videology 1959-1973, published by the Everson Museum of Art, Syracuse, New York, in 1974. 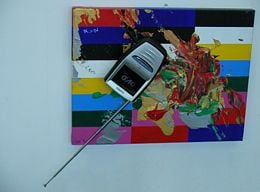 In another work, Something Pacific (1986), a statue of a sitting Buddha faces its image on a closed circuit television. (The piece is part of the Stuart Collection of public art at the University of California, San Diego.) Another piece, Positive Egg, displays a white egg on a black background. In a series of video monitors, increasing in size, the image on the screen becomes larger and larger, until the egg itself becomes an abstract, unrecognizable shape. In Video Fish,[5] from 1975, a series of aquariums arranged in a horizontal line contain live fish swimming in front an equal number of monitors which show video images of other fish. 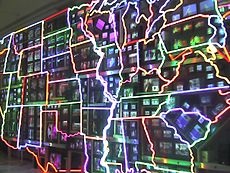 Paik’s 1995 piece, Electronic Superhighway: Continental U.S., Alaska, Hawaii, on permanent display at the Lincoln Gallery of the Smithsonian American Art Museum, is a stunning example of his exceptional vision and unique interpretation of cultural criticism. With this piece, Paik offers up an unsettling commentary about an American culture obsessed with television, the moving image, and bright shiny things. While Paik may have not had the full experience of twenty-first century cable television at the time, 1995’s Electronic Superhighway offers an eerie foresight into the modern video-obsessed culture, and confronts viewers directly with this modern malady.

Paik was also known for making robots out of television sets. These were constructed using pieces of wire and metal, but later Paik used parts from radio and television sets. 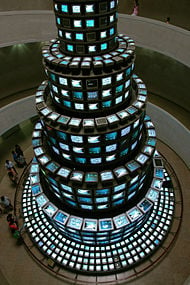 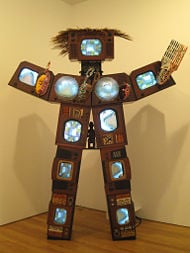 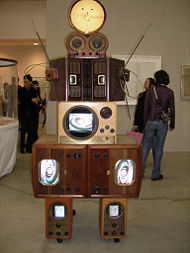 A retrospective of Paik's work was held at the Whitney Museum of American Art in the spring of 1982. During the New Year's Day celebration in January 1, 1984, he aired Good Morning, Mr. Orwell, a live link between WNET New York, Centre Pompidou Paris, and South Korea. With the participation of John Cage, Salvador Dalí, Laurie Anderson, Joseph Beuys, Merce Cunningham, Allen Ginsberg, Peter Orlovsky, George Plimpton, and other artists, Paik showed that George Orwell's Big Brother hadn't arrived. In 1986, Paik created the work Bye Bye Kipling, a tape that mixed live events from Seoul, South Korea, Tokyo, Japan, and New York. Two years later, in 1988, he further showed his love for his home with a piece called, The More the Better, a giant tower made entirely of one thousand and three monitors, for the Olympic Games being held in Seoul.

In 1996, Nam June Paik had a stroke, which left him partially paralyzed. A final retrospective of his work was held in 2000, at the Guggenheim Museum in New York, integrating the unique space of the museum into the exhibition itself. This coincided with a downtown gallery showing of video artworks by his wife, Shigeko Kubota, mainly dealing with his recovery from the stroke. Nam June Paik died January 29, 2006, in Miami, Florida, of natural causes.

Some of the public collections holding works by Nam June Baik 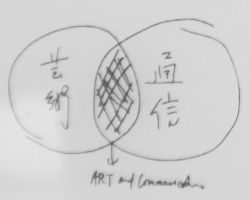 Retrieved from https://www.newworldencyclopedia.org/p/index.php?title=Nam_June_Paik&oldid=1086872
Categories:
Hidden category:
This page was last edited on 11 November 2022, at 01:11.
Content is available under Creative Commons Attribution/Share-Alike License; additional terms may apply. See Terms of Use for details.