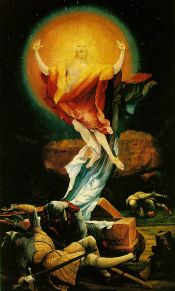 Mystici Corporis Christi is a papal encyclical issued by Pope Pius XII on June 29, 1943, during World War II, which affirms that the Church is the Mystical Body of Christ.[1] According to the encyclical, the Church has two aspects, a visible and an invisible dimension. Full membership in the Church involves those who live under the visible representative of Christ. However, there are many Christians who live outside the visible body and whom are still in a salvific relationship with Christ The relationship of these faithful within the invisible Church is a mystical connection to Christ. Through their faith, hope, and love, they are also united with Christ in the larger Church. Each of the faithful is said to be guided by the Holy Spirit and therefore an equal and important element of the body of Christ. All members of the Church are called to work on the perfection of the body of Christ and unification is said to take place in the Holy Eucharist.

The ancient Pauline concept of the Mystical Body of Christ provided the theological precedent for the emergence of Mystici Corporis Christi. However, the specific conditions for the encyclical were precipitated by the outbreak of the Second World War in which Nazi Anti-Semitism triggered a number of forced conversions to Christianity. Pope Pius XII condemned these forced conversions, for he taught that Church membership and conversions must be voluntary. The encyclical Mystici Corporis Christi reflected this position by stating:

Therefore, whenever it happens, despite the constant teaching of this Apostolic See, that anyone is compelled to embrace the Catholic faith against his will, Our sense of duty demands that We condemn the act.[2]

The teachings of Mystici Corporis Christi laid the groundwork for some of the pronouncements of the Second Vatican Council although it also generated some controversy about the relationship of the Church to Christ. For example, the Second Vatican Council decreed that the Church subsists in the Body of Christ.[3] This pronouncement seemed to some theologians, to relativize the identity of the Roman Catholic Church with the Body of Christ. The encyclical had stated that the Body of Christ is the Catholic Church. Pope Paul VI quoted Mystici Corporis from Pius XII verbatim in his first encyclical Ecclesiam Suam:

Consider, then, this splendid utterance of Our predecessor: "The doctrine of the Mystical Body of Christ, which is the Church, a doctrine revealed originally from the lips of the Redeemer Himself."

We wish to take up this invitation and to repeat it in this encyclical, for We consider it timely and urgent and relevant to the needs of the Church in our day.[4]

Mystici Corporis Christi described the Church as the mystical body of Christ with both visible and invisible bonds that tie the faithful together. In doing so, it provided a greater sense of interconnectedness between the church hierarchy and the laity. The encyclical affirms that while the lay people animate human society, the successors of the apostles are to be responsible in matters of religion and morals. Until this encyclical, the Church was considered as societas perfecta, a perfect society, consisting primarily of Pope, bishops, clergy and the religious. Mystici Corporis included lay people as equal and important elements of the body of Christ. It stated that the faithful are united with Christ in the Church. Christ loves and lives in them. Christ is alive through the Holy Spirit.

The encyclical was an important development in Roman Catholic doctrine because it had rejected two extreme views of the Church:

Mystici Corporis requests the faithful to love their Church and to always see Christ in her, especially in the old and sick members. For it is Christ who lives in His Church, and through her, teaches, governs, and sanctifies; it is Christ also who manifests Himself differently in different members of society. Furthermore, the encyclical stated that Christ, while still on earth, instructed by precept, counsel, and warnings, "in words that shall never pass away, and will be spirit and life,"[6] to all persons of all times. He conferred a triple power on His Apostles and their successors, to teach, to govern, to lead men to holiness, making this power, defined by special ordinances, rights and obligations, the fundamental law of the whole Church.[7]

Following in the footsteps of Martin Luther, subsequent Protestant theology rejected the Catholic view of Church as the perfect society with an authoritarian papacy. It employed instead the Bible as the sole source of authority (sola scriptura), yet its biblical interpretation of the mystical body is different from the encyclical: The Church receives all the graces from Christ its head without active participation. The mystical unity and the sacramental character of the Catholic theology is thus somewhat foreign to most Protestants. However, Mystici Corporis uses a biblical base for its teaching, and moves away from the non-bliblical authoritarian view of Church as the perfect society, and thus contributed to ecumenical dialogue with Protestantism.

The Orthodox Church shares a tradition based sacramental theology with the Catholic Church. Mystici Corporis, establishing equality of all apostles under the successor of Peter, instead of a “papalist” Societas Perfecta, was viewed quite positively, even so not all aspects were shared by all. (At the height of the Cold War, there were notable divergences of view between the Patriach of Moscow and the Western based patriachs.) Pope Pius, recognized an often criticized over-centralized papacy, and related Church laws and regulations as an obstacle to relations with the Orthodox Church. After issuing Mystici Corporis, the Pope ordered a reform the CIC Orientalis, the Canon Law for the Orthodox Churches, united with Rome. In its new constitutions, Eastern Patriarchs were made almost independent from Rome including Eastern marriage law, civil law, laws governing religious associations, property law, and other laws. These reforms were intended provide some independence of Orthodoxy and establish it as equal within of the mystical body of Christ.

The new role of the laity resulted in the foundation of numerous secular institutes with faithful members of all walks of life. Therefore, the encyclical recognized that the ordinary person had an important role to play in the Roman Catholic Church. As a result, the ordinary Catholic felt more empowered.

Following this theme, Pope Pius XII issued, in 1947, the Apostolic Constitution Provida Mater Ecclesia,[8] which, for the first time in Church history, allowed lay people to form their own secular communities, and establish them within a newly established Canon Law framework. The Pope himself used to encyclical to encourage active participation of the laity by addressing a wide variety of groups and professional associations throughout the world.