Muḥammad ibn Mūsā al-Khwārizmī (Arabic: محمد بن موسى الخوارزمي) was a Persian mathematician, astronomer, astrologer and geographer. He was born around 780 in Khwārizm (now Khiva, Uzbekistan) and died around 850. He worked most of his life as a scholar in the House of Wisdom in Baghdad.

His Algebra was the first book on the systematic solution of linear and quadratic equations. Consequently he is considered to be the father of algebra,[1] a title he shares with Diophantus. Latin translations of his Arithmetic, on the Indian numerals, introduced the decimal positional number system to the Western world in the twelfth century.[2] He revised and updated Ptolemy's Geography as well as writing several works on astronomy and astrology.

His contributions not only made a great impact on mathematics, but on language as well. The word algebra is derived from al-jabr, one of the two operations used to solve quadratic equations, as described in his book. The words algorism and algorithm stem from algoritmi, the Latinization of his name.[3] His name is also the origin of the Spanish word guarismo[4] and of the Portuguese word algarismo, both meaning "digit."

Few details about al-Khwārizmī's life are known; it is not even certain exactly where he was born. His name indicates he might have come from Khwarizm (Khiva) in the Khorasan province of the Abbasid empire (now Xorazm Province of Uzbekistan).

His kunya is given as either Abū ʿAbd Allāh (Arabic: أبو عبد الله) or Abū Jaʿfar.[5]

With his full name of Abu Ja’far Muhammad ibn Musa al-Khwarizmi, historians are able to extract that he was the son of Moses, the father of Ja’far. Either he or his ancestors came from Khiva (then Khwarazm), which is a city south of the Aral Sea in central Asia. That this city lies between the Tigris and Euphrates Rivers remains under discussion.

Another epithet given to him by al-Ṭabarī, "al-Majūsī," would seem to indicate that he was an adherent of the old Zoroastrian religion. This would still have been possible at that time for a man of Iranian origin, but the pious preface to al-Khwārizmī's Algebra shows that he was an orthodox Muslim, so al-Ṭabarī's epithet could mean no more than that his forebears, and perhaps he in his youth, had been a Zoroastrian.[6]

Al-Khwārizmī accomplished most of his work in the period between 813 and 833. After the Islamic conquest of Persia, Baghdad became the centre of scientific studies and trade, and many merchants and scientists, from as far as China and India, traveled to this city—and apparently, so did Al-Khwārizmī. He worked in Baghdad as a scholar at the House of Wisdom established by Caliph al-Maʾmūn, where he studied the sciences and mathematics, which included the translation of Greek and Sanskrit scientific manuscripts.

In Scientists of The Ancient World, Margaret J. Anderson states:

When al-Khwarizmi lived in Baghdad it was quite a new city, but its location at the meeting place of trade routes from India, Persia, and ports on the Mediterranean Sea had caused it to grow rapidly. From 813 to 823, Baghdad was ruled by the caliph (spiritual and political leader) al-Ma’mun. The caliph, who himself was an enthusiastic scholar and philosopher, soon turned the city into an important intellectual center. He established the House of Wisdom and ordered his scholars to translate the classical Greek texts into Arabic. Copies of these books ended up in Muslim centers of learning in Spain and Sicily. Later, they were translated into Latin and passed on to universities throughout Europe. 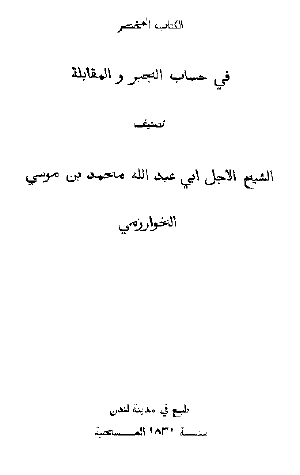 His major contributions to mathematics, astronomy, astrology, geography and cartography provided foundations for later and even more widespread innovation in Algebra, trigonometry, and his other areas of interest. His systematic and logical approach to solving linear and quadratic equations gave shape to the discipline of Algebra, a word that is derived from the name of his 830 book on the subject, al-Kitab al-mukhtasar fi hisab al-jabr wa'l-muqabala (Arabic الكتاب المختصر في حساب الجبر والمقابلة) or: "The Compendious Book on Calculation by Completion and Balancing." The book was first translated into Latin in the twelfth century.

His book On the Calculation with Hindu Numerals written about 825, was principally responsible for the diffusion of the Indian system of numeration in the Middle-East and then Europe. This book was also translated into Latin in the twelfth century, as Algoritmi de numero Indorum. It was from the name of the author, rendered in Latin as algoritmi, that originated the term algorithm.

Some of al-Khwarizmi’s contributions were based on earlier Persian and Babylonian Astronomy, Indian numbers, and Greek sources.

Al-Khwārizmī systematized and corrected Ptolemy's data in geography with regards to Africa and the Middle East. Another major book was his Kitab surat al-ard ("The Image of the Earth"; translated as Geography), which presented the coordinates of localities in the known world based, ultimately, on those in the Geography of Ptolemy but with improved values for the length of the Mediterranean Sea and the location of cities in Asia and Africa.

He also assisted in the construction of a world map for the caliph al-Ma'mun and participated in a project to determine the circumference of the Earth, supervising the work of 70 geographers to create the map of the then "known world".

When his work was copied and transferred to Europe through Latin translations, it had a profound impact on the advancement of basic mathematics in Europe. He also wrote on mechanical devices like the astrolabe and sundial.

The book is considered to have defined Algebra. The word Algebra is derived from the name of one of the basic operations with equations (al-jabr) described in this book. The book was translated in Latin as Liber Algebrae et Almucabala by Robert of Chester (Segovia, 1145)[7] hence "Algebra," and also by Gerard of Cremona. A unique Arabic copy is kept at Oxford and was translated in 1831 by F. Rosen. A Latin translation is kept is Cambridge.[8]

by dividing out the coefficient of the square and using the two operations al-ǧabr (Arabic: الجبر “restoring” or “completion”) and al-muqābala ("balancing"). Al-ǧabr is the process of removing negative units, roots and squares from the equation by adding the same quantity to each side. For example, x2 = 40x - 4x2 is reduced to 5x2 = 40x. Al-muqābala is the process of bringing quantities of the same type to the same side of the equation. For example, x2+14 = x+5 is reduced to x2+9 = x. 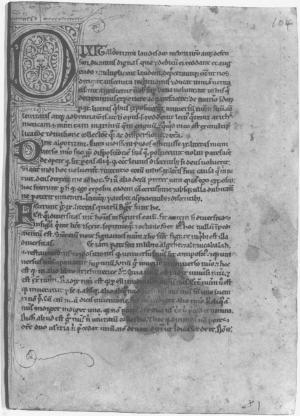 Page from a Latin translation, beginning with "Dixit algorizmi."

Al-Khwārizmī's second major work was on the subject of arithmetic, which survived in a Latin translation but was lost in the original Arabic. The translation was most likely done in the twelfth century by Adelard of Bath, who had also translated the astronomical tables in 1126.

The Latin manuscripts are untitled, but are commonly referred to by the first two words with which they start: Dixit algorizmi ("So said al-Khwārizmī"), or Algoritmi de numero Indorum ("al-Khwārizmī on the Hindu Art of Reckoning"), a name given to the work by Baldassarre Boncompagni in 1857. The original Arabic title was possibly Kitāb al-Jamʿ wa-l-tafrīq bi-ḥisāb al-Hind ("The Book of Addition and Subtraction According to the Hindu Calculation")[9]

Margaret J. Anderson of “Scientists of The Ancient World” states, “One of al-Khwarizmi’s big breakthroughs came from studying the work of Indian mathematicians. In a book called Addition and Subtraction by the Method of Calculation of the Hindus, he introduced the idea of zero to the Western world. Several centuries earlier … [an] unknown Hindu scholar or merchant had wanted to record a number from his counting board. He used a dot to indicate a column with no beads, and called the dot sunya, which means empty. When the idea was adopted by the Arabs, they used the symbol “0” instead of a dot and called it sifr. This gave us our word cipher. Two hundred and fifty years later, the idea of sifr reached Italy, where it was called zenero, which became “zero” in English.” 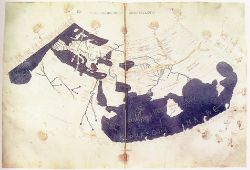 A fifteenth-century map based on Ptolemy's Geography for comparison.

Al-Khwārizmī's third major work is his Kitāb ṣūrat al-Arḍ (Arabic: كتاب صورة الأرض "Book on the appearance of the Earth" or "The image of the Earth" translated as Geography), which was finished in 833. It is a revised and completed version of Ptolemy's Geography, consisting of a list of 2402 coordinates of cities and other geographical features following a general introduction.[10]

There is only one surviving copy of Kitāb ṣūrat al-Arḍ, which is kept at the Strasbourg University Library. A Latin translation is kept at the Biblioteca Nacional de España in Madrid. The complete title translates as Book of the appearance of the Earth, with its cities, mountains, seas, all the islands and rivers, written by Abu Ja'far Muhammad ibn Musa al-Khwārizmī, according to the geographical treatise written by Ptolemy the Claudian.[11]

Neither the Arabic copy nor the Latin translation include the map of the world itself, however Hubert Daunicht was able to reconstruct the missing map from the list of coordinates. Daunicht read the latitudes and longitudes of the coastal points in the manuscript, or deduces them from the context where they were not legible. He transferred the points onto graph paper and connected them with straight lines, obtaining an approximation of the coastline as it was on the original map. He then does the same for the rivers and towns.[12] Al-Khwārizmī's Zīj al-sindhind (Arabic: زيج "astronomical tables") is a work consisting of approximately 37 chapters on calendrical and astronomical calculations and 116 tables with calendrical, astronomical and astrological data, as well as a table of sine values. This is one of many Arabic zijes based on the Indian astronomical methods known as the sindhind.[13]

Al-Khwārizmī wrote several other works including a treatise on the Jewish calendar (Risāla fi istikhrāj taʾrīkh al-yahūd "Extraction of the Jewish Era"). It describes the 19-year intercalation cycle, the rules for determining on what day of the week the first day of the month Tishrī shall fall; calculates the interval between the Jewish era (creation of Adam) and the Seleucid era; and gives rules for determining the mean longitude of the sun and the moon using the Jewish calendar. Similar material is found in the works of al-Bīrūnī and Maimonides.

Several Arabic manuscripts in Berlin, Istanbul, Taschkent, Cairo and Paris contain further material that surely or with some probability comes from al-Khwārizmī. The Istanbul manuscript contains a paper on sundials, which is mentioned in the Fihirst. Other papers, such as one on the determination of the direction of Mecca, are on the spherical astronomy.

He also wrote two books on using and constructing astrolabes. Ibn al-Nadim in his Kitab al-Fihrist (an index of Arabic books) also mentions Kitāb ar-Ruḵāma(t) (the book on sundials) and Kitab al-Tarikh (the book of history) but the two have been lost.

Retrieved from https://www.newworldencyclopedia.org/p/index.php?title=Muhammad_ibn_Mūsā_al-Khwārizmī&oldid=1086803
Categories:
Hidden category:
This page was last edited on 10 November 2022, at 17:58.
Content is available under Creative Commons Attribution/Share-Alike License; additional terms may apply. See Terms of Use for details.