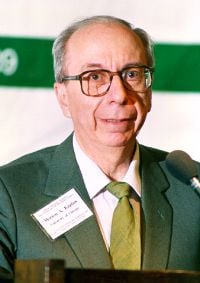 Morton A. Kaplan presiding at the Liberal Democratic Societies conference in London, 1989.

Morton A. Kaplan (May 9, 1921 – September 26, 2017) was Distinguished Service Professor of Political Science, Emeritus, at the University of Chicago. He also served as president of the Professors World Peace Academy International, chairman of the International Conference on the Unity of the Sciences, and editor of the World and I magazine, published by the Washington Times Corporation.

Kaplan was one of the foremost scholars in international relations, his groundbreaking 1957 publication, System and Process in International Politics, introducing scientific methodology to the field. He is heralded as the first to predict the end of communism in the Soviet Union, a prediction he made in 1985 a full six years before its eventual collapse.

Morton Kaplan was born in Philadelphia on May 9, 1921. He attended Temple University, receiving his Bachelors in political science in 1943. He then served in the US army during World War II, from 1943-1946.

He received his Ph.D. from Columbia University in 1951. He later did post-doctoral work, holding fellowships from the Center of International Studies at Princeton University and from the Center for Advanced Study in the Behavioral Sciences. He was also a Carnegie Traveling Fellow.

Before joining the faculty at the University of Chicago in 1956, he taught at Ohio State University, Haverford College, and was a staff member at the Brookings Institute.[1] In addition to his teaching responsibilities and chairing the Committee on International Relations in Chicago, Kaplan conducted seminal research on systems theory, as well as being active in several professional groups. He continued teaching in Chicago until his retirement in 1991, when he became Distinguished Service Professor Emeritus of Political Science.[1]

Kaplan married his wife, singer Essie Kaplan, who predeceased him by a few months. Morton Kaplan died on September 27, 2017 at the age of 96; survived by his son, Anthony Mondon. Kaplan was buried beside his wife in Oakwood Cemetery in Chicago.

Kaplan published extensively in the areas of international relations and international politics. His interests and knowledge were wide-ranging, and he was able to integrate concepts from game theory, physics, linguistics, cybernetics, and philosophy. His many books include Science, Language and the Human Condition, Law in a Democratic Society, and System and Process in International Politics, a seminal work in the scientific study of international relations. A critic of communism and of the policies of the Soviet Union, he served as editor of the 1978 collection, The Many Faces of Communism. He predicted the end of Soviet communism at a 1985 conference of the Professors World Peace Academy held in Geneva, Switzerland, a brave announcement that not only was the first to describe its imminent collapse but which also suggested ways to transition peacefully to a new system.[2]

Kaplan's view contrasts with that of John Rawls - that it might be possible to isolate some basic social and political rules; rather Kaplan's alternative theory of justice is his test in principle, a kind of decision procedure for evaluating social, political, and moral choices, which attempts to circumvent the limitations of an egocentric or culturally narrow perspective while providing sufficient context to make a judgment.[3]

Kaplan was active in a number of professional groups, including serving as president of the Professors World Peace Academy, consultant for the National Endowment for the Humanities, chairman of the International Conference on the Unity of the Science, and editor of the World and I magazine from its founding in 1986 until 2004.

Kaplan's involvement with organizations connected with Reverend Sun Myung Moon led to some concern at the University of Chicago, at one point putting his appointment to the chair of the political science department at risk. Undaunted, he continued to support these organizations as well as offering personal introductions to Reverend Moon at a number of public speaking engagements, where Kaplan's quirky humor was enjoyed by all present.

In the field of political science, Kaplan's influence is pervasive, with international relations scholars worldwide accepting his view that the study of world politics should be a scientific enterprise.[1]

The Morton A. Kaplan Prize, instituted in 1994 in honor of Kaplan, is awarded annually by the Committee on International Relations for the best Masters paper by a recent graduate of the program.[5]

Retrieved from https://www.newworldencyclopedia.org/p/index.php?title=Morton_Kaplan&oldid=1086688
Categories:
Hidden category:
This page was last edited on 10 November 2022, at 00:21.
Content is available under Creative Commons Attribution/Share-Alike License; additional terms may apply. See Terms of Use for details.