Luigi Cherubini (September 14, 1760 – March 15, 1842) was an Italian composer who spent most of his working life in France. Although his music is not well known today, it was greatly admired by many of his contemporaries. Beethoven considered him to be the greatest dramatic composer of his time.

The most significant part of Cherubini's work are his religious–themed operas and his compositions of sacred music. His influence extended into the twentieth century

Cherubini was born Maria Luigi Carlo Zenobio Salvatore Cherubini in Florence. His instruction in music began at the age of six with his father, himself a musician. By the age of thirteen, he had composed several religious works. From 1778 to 1780, he studied music in Bologna and Milan. Cherubini's early operas, settings of Italian libretti by Metastasio, adhered closely to the conventions of opera seria.

In 1788, Cherubini made a brief visit to London, where he started work on a setting of a French libretto by Jean-François Marmontel, Démophon. Cherubini's music began to show more originality and daring. Later the same year he settled in Paris. His first major success here was Lodoïska (1791) which was admired for its realistic heroism. This was followed by Eliza (1794), set in the Swiss Alps, and the opera Medea (1797), which is Cherubini's best known work. Les deux journées (1800), in which Cherubini simplified his style somewhat, was a popular success. These and other operas were premièred at the Théâtre Feydeau.

Cherubini's popularity declined markedly after Les deux journées, with Parisian audiences turning to younger composers such as Boieldieu. His opera-ballet Anacréon was an outright failure. In 1805, Cherubini received an invitation from Vienna to write an opera and to direct it in person. Faniska was produced the following year and was enthusiastically received, in particular, by Haydn and Beethoven. Les Abencérages (1813), an heroic drama set in Spain during the last days of the Moorish kingdom of Granada, was Cherubini's attempt to compete with Spontini's La Vestale. It brought the composer critical praise but few performances.

Disappointed with his lack of success in the theater, Cherubini turned increasingly to church music, writing seven masses, two requiems and many shorter pieces. During this period, he was also appointed surintendant de la musique du roi under the restored monarchy (his relations with Napoleon had been decidedly cool). In 1815, the London Philharmonic Society commissioned him to write a symphony, an overture, and a composition for chorus and orchestra, the performance of which he went especially to London to conduct, and this increased his international fame.

Cherubini's Requiem in C-minor (1816), commemorating the anniversary of the execution of King Louis XVI of France, was a huge success. The work was greatly admired by Beethoven, Schumann and Brahms. In 1836, Cherubini wrote a Requiem in D Minor to be performed at his own funeral. It is for male choir only, as the religious authorities had criticized his use of female voices in the earlier work.

In 1822, Cherubini became director of the Conservatoire and completed his textbook, Cours de contrepoint et de fugue, in 1835. His role at the Conservatoire would bring him into conflict with the young Hector Berlioz, who went on to portray the old composer as a crotchety pedant in his memoirs. Some critics, such as Basil Deane, maintain that Berlioz's depiction has distorted Cherubini's image with posterity, and it must be remembered that Berlioz himself was a great admirer of much of Cherubini's music. There are many allusions to Cherubini's personal irritability among his contemporaries; Adolphe Adam wrote, "some maintain his temper was very even, because he was always angry". Nevertheless, Cherubini had many friends, including Rossini, Chopin and, above all, the artist Ingres. The two had mutual interests—Cherubini was a keen amateur painter and Ingres enjoyed practicing the violin. In 1841, Ingres produced the most celebrated portrait of the old composer.

Cherubini died in Paris at age 81 and was buried in Père Lachaise cemetery. 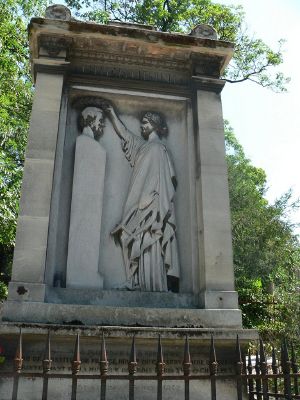 With the arrival in Paris in the 1820s of the brilliant, effervescent operas of Rossini with their vocal pyrotechnics, the classically austere operas of Cherubini, like those of Gluck and Spontini, fell out of fashion. However, Médée (or Medea as it is known in Italy) is occasionally revived when a singer is available who can handle the role, such as Maria Callas and Hungarian diva Sylvia Sass who recorded the opera in 1977 with Lamberto Gardelli conducting. Perhaps the most famous twentieth century live revival of the work was in Florence in 1953, with Maria Callas in the title role and conducted by Leonard Bernstein.

Another opera by Cherubini, Les abencérages, was revived (in Italian) at the Maggio Musicale in Florence in 1957 under the baton of Carlo Maria Giulini.

Cherubini's Requiem in C-minor is also occasionally performed. Most notably, Arturo Toscanini conducted and made a recording of it with the NBC Symphony Orchestra in February 1950. Toscanini also recorded Cherubini's Symphony in D.

Retrieved from https://www.newworldencyclopedia.org/p/index.php?title=Luigi_Cherubini&oldid=1085657
Categories:
Hidden category:
This page was last edited on 5 November 2022, at 02:42.
Content is available under Creative Commons Attribution/Share-Alike License; additional terms may apply. See Terms of Use for details.