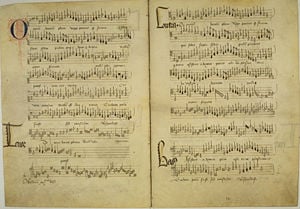 Manuscript of Omnium bonorum plena, a motet by Compère, and possibly his earliest surviving work; the exact date is uncertain, but it was possibly written for the dedication of Cambrai Cathedral on July 2, 1472.

Loyset Compère (c. 1445 – August 16, 1518) was a French composer of the Renaissance period. From the same generation as Josquin des Prez, he was one of the most significant composers of motets and chansons of that era, and one of the first musicians to bring the light Italianate Renaissance style to France.

Not only was the stylism light and without the turbulance and dynamicism of the Medieval style, but it was an introduction of a new clarity in a cooperative temperament which has shaped the moral environment that the modern world has adopted. This moral environment is especially reflected in the chansons and motets of Loyset Compere which blends sentimentality and wittiness into songs for lasting peace.

His exact place of birth is not known, but documents of the time assign him to a family from the province of Artois (in modern France), and suggest he may have been born in the County of Hainaut (in modern Belgium). At least one source from Milan indicates he described himself as coming from Arras, also in Artois. Both the date and probable place of birth are extremely close to those of Josquin des Prez. Indeed the area around the current French-Belgian border produced an astonishing number of excellent composers in the fifteenth and sixteenth centuries, composers whose fame spread throughout Europe. Often these composers are known as the Franco-Flemish, or from the Dutch School of music.

In the 1470s, Compère worked as a singer in Milan at the chapel of Duke Galeazzo Maria Sforza, during the time that composers such as Johannes Martini and Gaspar van Weerbeke were also singing there. The chapel choir in the early 1470s grew into one of the largest and most famous singing ensembles in Europe. After the murder of the Duke in 1476, Compère appears to have been retired from the chapel, and he may have returned to France at this time. Sometime during the next 10 years, he began to work at the French court, and he accompanied Charles VIII of France on his invasion of Italy in 1494 (in what capacity is not known). He was in Rome in early 1495 during the occupation of the city by Charles and his army.

He next had a series of church positions. By 1498, Compère was at Cambrai, and from 1500 to around 1504 he was at Douai with his final appointment at a church in St. Quentin. Throughout this time, he seems to have been in part-time service to the French court, as evidenced by his many compositions for official and ceremonial occasions. He died at St. Quentin.

Unlike his contemporaries, Compère seems to have written few masses (at least very few survived). By temperament he seems to have been a miniaturist, and his most popular and numerous works were in the shorter forms of the day, primarily chansons and motets. Two stylistic trends are evident in his music: the style of the Burgundian School, which he seems to have learned in his early career before coming to Italy, and the lighter style of the Italian composers current at the time, who were writing frottolas (the light and popular predecessor to the madrigal). Compère had a gift for composing melodies, and many of his chansons became popular. Later, many composers used several as cantus firmus (cantus firmi) for masses. Occasionally, he seems to have given himself a formidable technical challenge and set out to meet that challenge, such as writing quodlibets. An example is Au travail suis, which combines no less than six different tunes written to the same text by different composers.

Compère wrote several works in a unique form, sometimes called a "free" motet, which combines some of the light elegance of the Italian popular song of the time with the contrapuntal technique of the Netherlanders. Some mix texts from different sources. An example would be a rather paradoxical Sile fragor which combines a supplication to the Blessed Virgin Mary with a drinking song dedicated to Dionysus (Bacchus). His choice of secular texts tended towards the irreverent and suggestive.

His chansons are his most characteristic compositions, and many scholars of Renaissance music consider them to be his best work. They are for three or four voices, and are in three general categories: (1)Italianate, light works for four a cappella voices, very much like frottolas, with texts set syllabically and often homophonically, and having frequent cadences; (2)three-voice works in the Burgundian style, rather like the music of Dufay; and (3)three-voice motet-chansons, which resemble the medieval motet more than anything else. In these works, the lowest voice usually sings a slow-moving cantus firmus with a Latin text, usually from chant, while the upper voices sing more animated parts, in French, on a secular text.

Many of Compère's compositions were printed by Ottaviano Petrucci in Venice, and disseminated widely. Obviously their availability contributed to their popularity. Compère was one of the first composers to benefit from the new technology of printing, which had a profound impact on the spread of the Franco-Flemish musical style throughout Europe.

Compère also wrote several settings of the Magnificat (the hymn of praise to the Virgin Mary from the first chapter of the Gospel of Luke), as well as numerous short motets.

Retrieved from https://www.newworldencyclopedia.org/p/index.php?title=Loyset_Compère&oldid=1085492
Categories:
Hidden category:
This page was last edited on 4 November 2022, at 04:15.
Content is available under Creative Commons Attribution/Share-Alike License; additional terms may apply. See Terms of Use for details.