This is a Chinese name; the family name is 柳 (Liu). 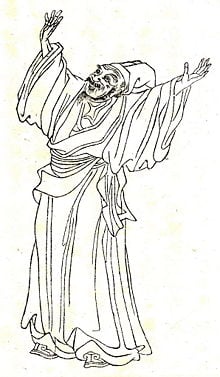 Liu Zongyuan (柳宗元) was a politician and literary man in China. This image was carried on the book which is called "Wan hsiao tang-Chu chuang -Hua chuan (晩笑堂竹荘畫傳) which was published in 1921（民国十年)

Liu Zongyuan( Liu Tsung-yüan , Liu Zongyuan, 柳宗元, Liǔ Zōngyuán, 773 – 819) was a Chinese writer, Chinese poet and prose writer who lived in Chang'an during the Tang dynasty. Liu Zongyuan was a master of the free and simple guwen prose of the early Chinese philosophers, and like his contemporary, the poet and essayist Han Yü, he strove to liberate writers from the formalized p'ien-wen (“parallel prose”) style which had been in vogue for nearly 1,000 years. Together with Han Yü, he was a founder of the Classical Prose Movement, and is traditionally classed as one of the Eight Great Prose Masters of the Tang and Song Dynasties.

Born in Chang'an, Liu Zongyuan was promoted very rapidly in the civil government. He supported the reform efforts of Emperor Shunzong, fell into disfavor with the authorities when the Emperor suddenly abdicated in 805, and was assigned a minor position as a commander of a remote military post at Yangzhou, in modern Hunan. After ten years, he was sent even farther away to the ethnic minority area of Liuzhou ( 柳州) (modern Guangxi province). In exile, Liu Zongyuan turned his attention to literature and wrote numerous letters, poems, fables, reflective travelogues and essays synthesizing elements of Confucianism, Taoism, and Buddhism. Around 180 of his poems are extant. Some of his works celebrate his freedom from office, while others mourn his banishment.

Liu Zongyuan was a political activist during the middle period of the Tang Dynasty, when the government was overwhelmed by crises following the An Shi rebellion, which had seriously disrupted China from 755 to 763 C.E.. An Shi, a Chinese general of Iranian and Turkish descent, had proclaimed himself Emperor and attempted to found his own dynasty to replace the Tang. Though the rebellion failed, it had far-reaching economic and social consequences. In 774, Emperor Tang Dezong (唐德宗李适 742–805), ascended the throne as the ninth emperor of the Tang Dynasty. Diligent and frugal, he implemented sweeping reforms of the Chinese bureaucracy and the taxation system which brought him into conflict with the aristocracy. He was unable to control the Fanzhen, a group of regional military governors who had taken over large areas along the border after the Anshin Rebellion, and who later contributed to the rebellions which caused the downfall of the Tang Dynasty. After a relatively stable reign of twenty-six years, Dezong died in the first month of 805 and was succeeded by his son, Emperor Shunzong.

Liu Zongyuan was born in Changan, the capital of the Tang dynasty, in 773. He was rapidly promoted in civil government and had a highly successful early career. When Shunzong came to power in the second month of 805, Liu Zongyuan supported his efforts to reform the administration and suppress the power of corrupt eunuchs in the court. These efforts were moderately successful, but after only six months on the throne, Shunzong became ill following a stroke and was forced by corrupt officials to abdicate in favor of his son. Shunzong died soon afterwards in the Xingqing Palace, and it was rumored that he had been murdered. Liu Zongyuan fell from official favor because of his association with Shunzong and his involvement with Wang Shuwen and his reformist movement. He was exiled to a military command post in Yongzhou (永州), (Hunan province), and a decade later, he was banished even farther away to serve as a regional chief in the ethnic minority area of Liuzhou (柳州)(modern Guangxi province). There he won the esteem of the people by working to improve productivity, develop education, reform unhealthy local traditions, and emancipate servants. After three years in Liuzhou, Liu Zongyuan died in 819.

The exile to Yongzhou was a personal setback for Liu Zongyuan, but it allowed his literary career to flourish. No longer able to exercise his abilities in the political arena, he turned his attention to literature, and his works in exile are considered to be his finest. The writings done in the capital were bureaucratic in nature, and he considered them primarily a means to advance his career; in exile, he wrote a number of delightful didactic pieces. He is particularly known for his allegorical writings and for his fables, which like Aesop's fables, are often tales about animals.

Liu Zongyuan wrote numerous letters, poems, fables, reflective travelogues and essays synthesizing elements of Confucianism, Taoism and Buddhism. His essays were often allegorical, and many of his works contain references to his own political misfortunes. Around 180 of his poems are extant. Some of his works celebrate his freedom from office, while others mourn his banishment. Liu Zongyuan took fables from the writings of early Qin Dynasty authors and turned them into independent works. One widely-known fable, "Discourse of the Snake－Catcher," compared taxes to the venom of a snake.

Liu Zongyuan was a master of the free and simple guwen style of prose which had been used by the early Chinese philosophers. He supported his contemporary, the poet Han Yu, in his efforts to liberate writers from the strictly formal p'ien-wen, “parallel prose” style which had been the fashion among Chinese writers for almost one thousand years. Along with Han Yu, he was a founder of the Classical Prose Movement, and came to be traditionally classed as one of the Eight Great Prose Masters of the Tang and Song Dynasties.

Even after he was demoted and exiled to Yongzhou, Liu Zongyuan continued to believe that political reform could bring about better circumstances for society. Unlike some of his contemporaries, who believed that “Heaven,” or the natural order of things, dictated human events, Liu believed that there was no connection between natural forces and human activities. He emphasized that human beings had no effect on the affairs of Heaven, such as the occurrence of natural disasters and the creation of the physical universe; and that the state of human society, whether one of social disorder or of good governance according to laws and principles, was solely the consequence of human actions. The natural sphere and the sphere of human society were independent and did not interfere with each other.

It is rather by our efforts than by the Decrees of Heaven that the unlucky is changed into the lucky, and the unjustifiable transformed into the justifiable.

Yongzhou (永州), in the southern part of modern Hunan Province, was remote and isolated during the Tang Dynasty. The scenic landscapes there had a charm which inspired Liu Zongyuan’s best-known travel pieces, the Eight Records of Excursions in Yongzhou (永州八游记).

Cutting down some bamboos to open a road, I saw a pond with clear water. At its bottom is a whole piece of rock. The rock rises by the bank as if it's a highland, an islet, a mountain peak or a standing rock. Trees grow all around. Wisterias twine round the trees and swing in the wind.

Liu frequently blended his personal feelings with his descriptions of nature:

Sitting by the pond, I'm surrounded by trees and bamboos. Nobody comes into the field of my vision. I'm bitterly disappointed by a feeling of loneliness.

Liu Zongyuan’s autobiographical poem, “River Snow,” is considered an example of how a few words can be used to convey a great deal of meaning. It has been the subject of numerous landscape paintings.

A thousand hills, but no birds in flight,
Ten thousand paths, with no person's tracks.
A lonely boat, a straw-hatted old man,
Fishing alone in the cold river snow.

A thousand mountains without a bird.
Ten thousand miles with no trace of man.
A boat. An old man in a straw raincoat,
Alone in the snow, fishing in the freezing river.
(Kenneth Rexroth, trans.)