Lester Frank Ward (June 18, 1841 – April 18, 1913), was an American botanist, paleontologist, and sociologist, and first president of the American Sociological Association. He is credited as one of those instrumental in establishing sociology as an academic field in the United States. His vision of a just society, with equality for women, all social classes and races, and the elimination of poverty was revolutionary for his time. He believed that human beings have the capability to accomplish such a society, and that social scientists, sociologists in particular, had the responsibility to guide humankind in that direction.

Lester Frank Ward was born in Joliet, Illinois, into the family of Justus Ward and Silence Rolph. His family did not have enough money to send Lester to school, so he was home-schooled. However, Lester’s intellectual abilities, especially his sense for foreign languages immediately became visible. Lester taught himself Latin, Greek, German, Russian, Japanese, and Hebrew. After his family moved to Myersburg, Pennsylvania, Ward started working with his brother in a wagon wheel shop. At the same time, Ward continued studying, mostly after work and at night. It was probably this experience of poverty and hard work that affected Ward, as he later dedicated his academic life to advocating for social justice.

When the American Civil War broke out in 1861, Ward joined the Pennsylvania regiment and was wounded at Chancellorville. In 1862, he married Elisabeth Caroline Bought. When the war ended, Ward started studying botany and law at George Washington University (then Columbian College) where he received an A.B. in 1869, the LL.B. degree in 1871, and the A.M. degree in 1872. At the same time he was working for the United States Treasury Department.

In 1882, Ward started to work for the United States Geological Survey, where he remained employed for the rest of his career. He first held the post of assistant geologist, and from 1889 to 1892 of geologist, and in 1892 he was promoted to paleontologist. At the same time he served as Honorary Curator of the Department of Fossil Plants in the U.S. National Museum.

Lester Ward believed that science should work for the improvement of the human condition. As he put it in the preface to Dynamic Sociology (1883):

The real object of science is to benefit man. A science which fails to do this, however agreeable its study, is lifeless. Sociology, which of all sciences should benefit man most, is in danger of falling into the class of polite amusements, or dead sciences. It is the object of this work to point out a method by which the breath of life may be breathed into its nostrils. 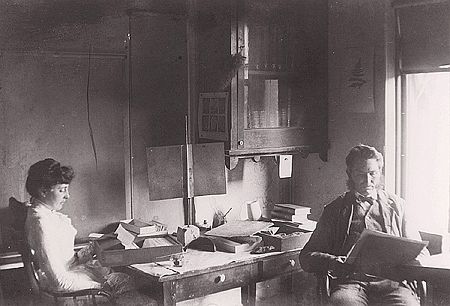 Ward theorized that poverty could be minimized or eliminated by systematic state intervention. He believed that humankind is not helpless before the impersonal force of nature and evolution. Instead, through the power of mind, man could take control of the situation and direct the evolution of human society. This theory is known as "telesis."

According to Ward, a sociology that intelligently and scientifically directs the social and economic development of society should institute a universal and comprehensive system of education, regulate competition, connect the people together on the basis of equal opportunities and cooperation, and promote the happiness and freedom of everyone.

Ward was a strong advocate for equal rights for women and even theorized that women were naturally superior to men, much to the scorn of mainstream sociologists.

Ward placed himself in direct opposition to social Darwinism, especially to the work of Herbert Spencer. Although Ward admired Spencer, he believed that Spencer had lost his way when he tried to apply his ideas to the world of government and politics. Besides, Spencer's American disciple, William Graham Sumner, who gained great fame (and wealth) in the American business community, was single-mindedly promoting the principles of laissez-faire and "survival of the fittest":

Ward was the first major scholar to attack this whole system of negativist and absolutist sociology and he remains the ablest…. Before Ward could begin to formulate that science of society which he hoped would inaugurate an era of such progress as the world had not yet seen, he had to destroy the superstitions that still held domain over the mind of his generation. Of these, laissez faire was the most stupefying, and it was on the doctrine of laissez faire that he trained his heaviest guns. The work of demolition performed in Dynamic Sociology, Psychic Factors and Applied Sociology was thorough (Commager 1959).

Although Lester Frank Ward’s impact was not as great as of some of his contemporaries, like Albion W. Small or George Herbert Mead, he left his mark on the development of American sociology. At one point, Ward was considered one of America’s greatest thinkers, even called an “American Aristotle.”

Ward is best remembered for his pioneering work in sociology. His book Dynamic Sociology was truly advanced for his time. When laissez-faire economy and the Industrial Revolution shaped society, Ward argued that real progress could be achieved only through a planned society led by a benevolent government, advised by a council of sociologists, that would provide education and social justice for all. Ward’s ideas promoting equality of women, of social classes, and of races can also be seen as revolutionary for his time.