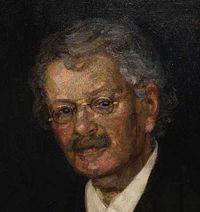 Johan Gustaf Knut Wicksell (December 20, 1851 – May 3, 1926) was a Swedish economist, often regarded as the father of the Stockholm School of Economics. His work attempted to synthesize three theoretical approaches to economics—the Lausanne school, the Austrian school, and the Ricardians. He is also renowned for his pioneering work in monetary theory and his contributions to macroeconomics.

A Malthusian, he made quite a name for himself giving lectures on the reasons for drunkenness, prostitution, poverty, and overpopulation, proposing birth control as the cure for these problems. Elements of his public policy were taken by the Swedish government, becoming part of their welfare state program. Thus, Wicksell's work did not remain in the realm of theory but was implemented in practice, to the benefit of many in his society.

Knut Wicksell was born on December 20, 1851 in Stockholm, Sweden, the son of a relatively successful businessman and real estate broker. He lost both his parents at a relatively young age: his mother died when he was only six-years-old, and his father when he was 15.

His father's considerable estate allowed Wicksell to enroll at the University of Uppsala in 1869 to study mathematics and physics. He received his first degree in two years, but continued in graduate studies until 1885 when he received his doctorate in mathematics. In the following years, however, his interests began to shift toward the social sciences, in particular, economics.

In 1887, Wicksell received a scholarship from the Victor Lorén Foundation to study economics in Germany and Austria. There, he attended lectures by the economist Carl Menger in Vienna, and also studied at the universities of Strassburg, Berlin, and Paris. After his return to Stockholm, he continued to draw attention with his radical lectures and papers, but was unable to secure permanent employment.

In 1887, Wicksell took a common-law wife, Anna Bugge, with whom he had two sons. He soon found it difficult to support his family on his irregular positions and publications. He received his doctorate in economics from the University of Uppsala in 1896, but still could not get a professorship job. At the time, economics in Sweden was taught as part of the law school and Wicksell was unable to gain a chair as a professor because of his lack of a law degree. He returned to the University of Uppsala where he completed a four-year study of law in two years, and subsequently became an associate professor at that university in 1899.

In 1900, Wicksell became a full-time professor at Lund University, where his career blossomed. He published numerous works and taught classes in tax law and economics. After a lecture in 1908 satirizing the Immaculate Conception, Wicksell was sentenced to prison for two months, serving the sentence in 1910.

In 1916, Wicksell retired from his post at Lund and took a position at Stockholm, advising the government on financial and banking issues. In Stockholm, Wicksell continued to supervise doctoral dissertations in economics, including those of many future great economists of the so-called "Stockholm School," such as Bertil Ohlin and Gunnar Myrdal.

Wicksell died in 1926 in Stockholm while writing his final work on the theory of interest.

As a lecturer at Uppsala, Wicksell had attracted attention for his opinions about labor. At one lecture, he drew a correlation between workers' alienation and poverty with social ills such as drunkenness and prostitution. Although he was sometimes identified as a socialist, his solution to the above problems was decidedly Malthusian in advocating birth control—a theory he would defend to the end of his life.

Although he had attracted some attention for his fiery ideas, his first work in economics, Value, Capital and Rent, published in 1892, was largely unnoticed. In 1896, he published Studies in the theory of Public Finance, applying the ideas of marginalism to progressive taxation, public goods, and other aspects of public policy, attracting considerably more interest.

Wicksell was enamored with the theories of Léon Walras (the Lausanne school), Eugen von Böhm-Bawerk (the Austrian school), and David Ricardo, and sought a synthesis of these three theoretical visions of the economy. Wicksell's work on creating a synthetic economic theory earned him a reputation as an "economist's economist." For instance, although the marginal productivity theory—the idea that payments to factors of production equilibrate to their marginal productivity—had been laid out by others such as John Bates Clark, Wicksell presented a far simpler and more robust demonstration of the principle, and much of the present conception of that theory stems from Wicksell's model.

Extending from Ricardo's investigation of income distribution, Wicksell concluded that even a totally unfettered economy was not destined to equalize wealth, as a number of his predecessors had predicted. Instead, Wicksell claimed, wealth created by growth would be distributed to those who had wealth in the first place. From this, and from theories of marginalism, Wicksell defended a place for government intervention to improve national welfare.

This contribution, called the "cumulative process," implied that if the natural rate of interest was not equal to the market rate, demand for investment and quantity of savings would not be equal. If the market rate is beneath the natural rate, an economic expansion occurs, and prices, ceteris paribus, will rise.

This idea would be expanded upon by the later members of the Austrian school, Ludwig von Mises and Friedrich Hayek, who used it to form a theory of the business cycle based on central bank policy. The theory suggested that changes in the level of money in the economy would shift the market rate of exchange in some way relative to the natural rate, and thus trigger a change in economic growth.

Wicksell is regarded as the father figure of the Stockholm school, which took many of Wicksell’s insights and developed them into its own version of macroeconomics. This version, in a way, resembled later Keynesian economics. Among the Swedish economists who continued to expound on Wicksell were Bertil Ohlin, Gunnar Myrdal, and Dag Hammarskjöld, later secretary general of the United Nations.

Elements of Wicksell’s public policy were taken strongly to heart by the Swedish government, including his vision of a limited welfare state. Wicksell's contributions to economics have been described by some economists as fundamental to modern macroeconomics.

Wicksell's main intellectual rival was the American economist Irving Fisher, who espoused a more succinct explanation of the quantity theory of money. Although both economists concluded from their theories that at the heart of the business cycle (and economic crisis) was government monetary policy, their disagreement would not be solved in their lifetimes. Indeed, it was inherited by the policy debates between the Keynesians and monetarists beginning a half-century later.

Retrieved from https://www.newworldencyclopedia.org/p/index.php?title=Knut_Wicksell&oldid=1010928
Categories:
Hidden category:
This page was last edited on 21 April 2018, at 20:38.
Content is available under Creative Commons Attribution/Share-Alike License; additional terms may apply. See Terms of Use for details.