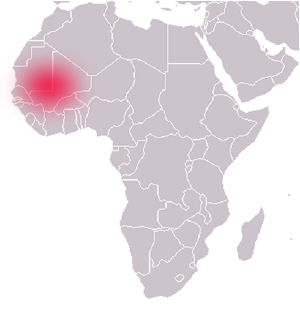 The Ghana Empire in Africa

The Kingdom of Ghana existed from approximately 750 C.E. to 1076 C.E. in modern day southeastern Mauritania, Western Mali, and Eastern Senegal. The kingdom of Ghana was known as Wagadou in the native Sonicke language of the region, a word that combines the word dou ( land) and the word waga (herd). The term the Kingdom of Ghana, or sometimes the Empire of Ghana, came about in Europe and Arabia as a way to identify the region. Ghana is a traditional honorific title of leaders in Wagadou, thus the term Ghana Empire relates to the title of the emperor not a geographic area.

The rise of the Ghana Empire in the eighth century marked a shift in Western Africa from small political organizations rooted in village life to large scale political entities that controlled vast geographic regions. The founders of the Ghana Empire were Sonicke, whose modern day counterparts live in the republic of Senegal. The Sonicke traditionally were traders who capitalized on the ideal location of Ancient Ghana to form relationships with the caravans in the north and gold traders in the south. Due to the trade routes crossing the desert, the Kingdom of Ghana grew rich exporting gold, ivory and salt. Market surpluses allowed urban centers to develop, where inhabitants could live comfortable lives through specialized occupations. The Sonicke established a monarchy in Ghana, and twenty two individuals took the throne before the beginning of the Muslim era in 622 C.E.

As well as being important to the political formation of the Kingdom of Ghana, trade was also responsible for providing historical documentation of the region. The first written sources about the region can be traced to Andalusian traders who frequently visited the area. Documentation of the Kingdom of Ghana increased in the late ninth century C.E. and the early tenth century C.E. when a centralized monarchy emerged in the region and controlled all trade routes through Ghanian territory. The most detailed account of life in the Kingdom of Ghana was written by the Cordoban scholar al-Bakri, who collected stories from a number of travelers to the region and consolidated the accounts into a detailed description of the kingdom in 1067. His report documents a new form of expansion, where subdued kingdoms were forced to pay tribute to the Kingdom of Ghana and pay taxes. His contemporaries argued that Ghana was a massive political force that could raise an army of 200,000 soldiers and calvary if the need arose.

In the sevenh and eighth centuries C.E. Islam began to spread across Northern Africa. The religion reached the Kingdom of Ghana in the ninth and tenth centuries when Saharan traders introduced their new religion to the region. The royal court of Ghana, however, did not convert to Islam and retained traditional religious practices throughout the city. Recognizing the importance of placating the Muslim Saharan traders, the King of Ghana allowed them to engage in trade and create their own city ten kilometers from the emperor's town.

Height of the Kingdom of Ghana

The empire's capital was built at Kumbi Saleh on the edge of the Sahara in a region called the Sahel. The capital was formed from two distinct cities that were originally situated six miles apart. As populations increased, the two cities merged into one. While technically merged into one single city, both sides of the city retained a distinct character. One half of the city, called the El Ghaba section, was considered the spiritual center of the Kingdom of Ghana. It was home to the royal palace, as well as other wealthy residents of the town. Most homes in the El Ghaba section were built from wood and stone, while poorer sections of the town contained houses made of wood and clay. Flanked on all sides by a stone wall, the El Ghaba side of town also contained a sacred grove of trees that was used in religious ceremonies. The other section of the town, whose name has not been preserved in historical record, was considered a trading center. It functioned as the business district of the town and was inhabited almost entirely by Arab and Berber merchants. Due to the fact that Islam was the prominent religion on this side of the town, more than a dozen mosques were located within the trading center. At its height Kumbi Saleh boasted a population of over 30,000 inhabitants.

The Kingdom of Ghana was able to retain its position in Western Africa by collecting tribute and taxes from its citizens. There were two distinct types of taxes that were paid the royal treasury: import and export tax and production tax. The import and export tax was paid by traders for the right to bring commodities in or out of Kumbi Saleh. The second tax, the production tax, was applied to the production of gold.

In the early eleventh century C.E. Ghana entered a period of decline that was marked by a series of military attacks by the Berbers in the north. The Berbers were a predominately poor society that sought the trade access of the Kingdom of Ghana. The Berber advance on Ghanian territory took a religious turn soon after 1000 C.E., when a dynamic leader named Abdullah Ibn Yasin emerged. Adbullah Ibn Yasin founded a religious center called a hermitage where his followers, the Almoravids, practiced a strict Muslim lifestyle. In 1056 C.E. the Almoravids launched a movement northward and captured the city of Sijilmasa. Following that movement the Almoravids crossed the straits of Gibraltar and took over Muslim Spain. A southern portion of the Almoravid movement, led by Abu Bakr, launched an attack against Ghana. The attack against the Kingdom of Ghana finally suceeded in 1054 C.E., when the city of Audaghost fell to the Almoravid attack.

After the death of Abu Bakr in 1087, the Kingdom of Ghana was no longer a formidable power. The death of Abu Bakr did not stop the Almoravid advance, as Ghana was weakened to the point that it had little military force remaining with which to battle the invasion. In particular, the deterioration of the empire could be marked through geographic loss, as the royal palace no longer exercised control over its former provinces.

The former provinces of Ghana broke apart and became independent states in their own right. The larger territories in the region had better sucess rates when they became independent, three of which were Takrur, Diara, and Kaniaga. Tied to the emergence of the new states was a group called the Peul, referred to as the Fulani people in English. They were the major inhabitants of Takrur, and upon being released from the control of the kingdom of Ghana, launched an expansionist movement designed to gain more territory.

The ancient kingdom of Ghana provided the namesake for the modern day country of Ghana. While the country pays a debt to the kingdom through its name, no physical territory is shared between the modern country and the ancient kingdom. According to folklore, the nominal link is due to a migration of the survivors of the Ghana Empire following its fall. This theory, however, remains controversial. Most scholars feel that the naming is a respectful move, where the modern country sought to tie its legacy to the historical prominence of the Kingdom of Ghana. The Sosso people also tie themselves to the ancient kingdom, and claim to have migrated to the area after the fall of the kingdom of Ghana.