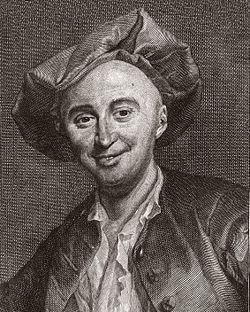 Julien Offray de La Mettrie (December 25, 1709 – November 11, 1751) was a French physician and philosopher, the earliest of the materialist writers of the Enlightenment. As a physician, he made a study of his own hallucinations during a fever and published Histoire naturelle de l'âme (Natural History of the Soul, 1745), concluding that psychical phenomena could be explained by organic changes in the body and brain. This provoked an outcry which forced him to leave France and go to Leiden, where he further developed his theories in L'Homme machine (Man a Machine, 1747), applying Rene Descartes’ mechanistic ideas on animals to human behavior. The book was burned and the feeling against him was so strong that he was compelled to leave the Netherlands in 1748.

He was received in Berlin by Frederick the Great, who allowed him to practice medicine and made him a court reader. There La Mettrie wrote his major book Discours sur le bonheur (1748), and La Volupté, and L'Art de jouir, in which the purpose of life was found in the pleasures of the senses, and virtue was reduced to self-love. The only means of ensuring mankind’s happiness, he argued, was atheistic materialism.

La Mettrie’s writings had considerable influence on French materialists and later Enlightenment thinkers. While he is now regarded as a pioneer of scientific psychology and cognitive science, his perspective on religion, morality, and spirituality is one-sided and limited.

La Mettrie was born at Saint-Malo, France on December 25, 1709, to Julien Offray de La Mettrie and Marie Gaudron. Much of the information about his life comes from the eulogy offered at his funeral by Frederick the Great. La Mettrie’s parents were able to afford a good education for their son; he studied humanities and rhetoric at Coutance, Paris and Caen. He excelled in literature, poetry and oratory, but his father decided that he should become a priest and sent him to study logic under M. Cordier, a Jansenist. After he had studied theology in the Jansenist schools for several years, a doctor in his home town of Malo persuaded him to become a physician and convinced his father that medicine would be a more lucrative profession than the priesthood. La Mettrie studied natural philosophy at the college of Harcourt in 1725 and took the degree of doctor at Rheims.

In 1733 he went to Leiden to study under Boerhaave, and in 1734 translated a treatise, Aphrodisiacus, by Boerhaave, and added a treatise of his own on venereal disease, followed by a treatise on vertigo on 1736. While carrying on a successful medical practice in Leiden, he published in Paris a treatise on smallpox, his Practical Medicine, and six volumes of commentary on the physiology of Boerhaave.

In 1742 La Mettrie returned to Paris, where he obtained the appointment of surgeon to the guards and accompanied the duke of Gramont to war. He attended the duke at the Battle of Dettingen, at the siege of Freiburg, and at the battle of Fotenoy, where the duke was killed by a cannon shot. During the hallucinations brought on by an attack of fever at Frieburg, La Mettrie made observations on himself with reference to the action of quickened circulation upon thought, which led him to the conclusion that psychical phenomena were the result of the effects of organic changes in the brain and nervous system. He published his conclusions in his earliest philosophical work, the Histoire naturelle de l'âme (1745). The chaplain of the regiment attacked him and the priests claimed that a doctor accused of heresy could not cure the French guards. La Mettrie brought further persecution on himself from French physicians by writing, under the influence of a friend who desired an appointment as first physician to the king of France, a work called The Politics of Physicians. The duke of Duras and the viscount of Chaila advised him to escape from the persecution and revenge, and in 1746 he left the army hospitals where he had been placed and went to Leiden. There he composed Penelope, a polemical work against the physicians in which he made fun of the vanity of his profession.

No longer able to practice medicine, La Mettrie developed his doctrines of materialism still more boldly and completely, and with great originality, in L'Homme machine (Eng. trans., London, 1750; ed. with introd. and notes, J. Asszat, 1865), and L'Homme plante. According to Frederick the Great, “This work, which was bound to displease men who by their position are declared enemies of the progress of human reason, roused all the priests of Leyden against its author. Calvinists, Catholics and Lutherans forgot for the time that consubstantiation, free will, mass for the dead, and the infallibility of the pope divided them: they all united again to persecute a philosopher who had the additional misfortune of being French, at a time when that monarchy was waging a successful war against their High Powers.”

The feeling against him was so strong that, in February 1748, La Mettrie was compelled to quit the Netherlands for Berlin, where he was received as a member of the Royal Academy of Science, and Frederick the Great not only allowed him to practice as a physician, but appointed him court reader. There La Mettrie wrote his major book "Discours sur le bonheur" (1748), and La Volupté, and L'Art de jouir, in which the purpose of life was found in the pleasures of the senses, and virtue was reduced to self-love. The only means of ensuring mankind’s happiness, which had been rendered impossible by the wars brought about by theologians, under the excuse of an inexistent "soul," was atheism. When death comes, the farce is over (la farce est jouée), therefore we should enjoy pleasure while we can.

La Mettrie's celebration of sensual pleasure was said to have resulted in his early death. The French ambassador Tirconnel was very grateful to La Mettrie for curing him of an illness, and gave a feast to celebrate his recovery. It is claimed that La Mettrie wanted to show either his power of gluttony or his strong constitution by devouring a large quantity of pâte aux truffes. As a result, he developed a fever, became delirious, and died.

La Mettrie died in the house of Milord Tirconnel, the French plenipotentiary, whom he had restored to life. It seems that the disease, knowing with whom it had to deal, was cunning enough to attack him first by the brain, in order to destroy him the more surely. A violent fever with fierce delirium came on. The invalid was obliged to have recourse to the science of his colleagues, but he failed to find the succor that his own skill had so often afforded as well to himself as to the public.

In a confidential letter to the Markgräfin von Bayreuth, Frederick wrote, "He was merry, a good devil, a good doctor, and a very bad author. By not reading his books, one can be very content.”

He then mentioned that La Mettrie had suffered from indigestion caused by overindulging in the pheasant paste. The actual cause of his death, however, was the bloodletting that La Mettrie had prescribed for himself. Frederick asserted that the German doctors did not condone bleeding a patient, and La Mettrie was trying to prove them wrong.

La Mettrie died on November 11, 1751, at the age of 43, leaving a wife, Louise Charlotte Dréano, and a five-year-old daughter.

La Mettrie was born with a fund of natural and inexhaustible gaiety; he had a quick mind, and such a fertile imagination that it made flowers grow in the field of medicine. Nature had made him an orator and philosopher; but a yet more precious gift which he received from her, was a pure soul and an obliging heart. All those who are not imposed upon by the pious insults of the theologians mourn in La Mettrie a good man and a wise physician. (Eulogy for La Mettrie, Frederick the Great)

La Mettrie’s most famous works were Histoire naturelle de l'âme (Natural History of the Soul) (1745), which explained mental processes as the result of physiological states of the body, and L'homme machine (Man a Machine, 1747), which explained physiology in purely mechanistic terms. La Mettrie extended the mechanistic aspects of the philosophy of Rene Descartes, abandoning his dualism and rationalism. La Mettrie maintained that the Cartesian theory that animal behavior emerged from soulless machines could also be applied to human behavior. He also suggested that conscious and voluntary processes of the mind are only distinguished from involuntary and instinctual activities by the relative complexity of their mechanical causes. However, La Mettrie regarded matter as essentially active and sensitive, and the living machine as a purposive, autonomous, and dynamic system.

By arguing that states of the soul depended uniformly on physiological states of the body, La Mettrie left no grounds for free will or moral responsibility, and it was this that so antagonized the religious community. However, La Mettrie offered his ideas as a general hypothesis for the study of human behavior, and did not feel the need to associate all mental processes with specific physiological causes.

The collected Oeuvres philosophiques of La Mettrie appeared after his death in several editions, published in London, Berlin and Amsterdam respectively.

Although vilified by his religious contemporaries, La Mettrie had considerable influence on French intellectuals. Pierre Jean Georges Cabanis (1757-1808), the most ardent materialist of the French Enlightenment, took La Mettrie's naturalism to its logical extreme in his Rapports du physique et du moral de l'homme (1802). La Mettrie’s explanation of psychic phenomena as resulting from physiological processes laid the groundwork for modern materialism, and he is now regarded as a pioneer of scientific psychology and cognitive science.