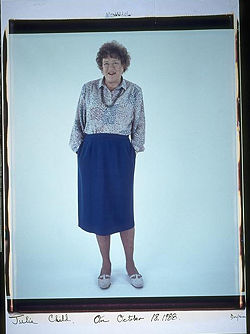 Polaroid portrait of Julia Child taken by Elsa Dorfman in 1988

She believed food could be used as a means to bring people together to strengthen families and promote unity among all people. Through her many cookbooks and television programs she has endeared herself to many and grown into a timeless culinary icon. She has gained worldwide acclaim for her 1961 cookbook, Mastering the Art of French Cooking as well as for her television series The French Chef, which premiered in 1963.

Julia was born Julia Carolyn McWilliams to John and Julia McWilliams in Pasadena, California. As a young child, she attended a Montessori school that allowed her to develop her coordination, which would later be so important in her work. As a young girl, she kept a diary in which she said that she was "like no one else," the possessor of "unique spiritual gifts," and "meant for something special." After completing grammar and high school, Julia had grown into a spirited 6-foot 2-inch young lady. She attended Smith College where she persued a bachelor of arts degree in history and joined the basketball team. After graduating in 1934, she moved to New York City where she worked as a copywriter for W. & J. Sloane, a home furnishing company. She returned to California in 1937, where she spent the next four years at home writing for local publications and working in the field advertising.

Julia had a deep and loving heart with which she served others in a multitude of ways. She volunteered with the American Red Cross and, after the bombing of Pearl Harbor in 1941, joined the Office of Strategic Services (OSS) after being turned down by the United States Navy for being too tall. For a year, she worked as a file clerk at the OSS Emergency Sea Rescue Equipment Section in Washington, D.C., where she helped in the development of a shark repellent. In 1944 she was posted to Kandy, Ceylon (now Sri Lanka), where she met her future husband, Paul Cushing Child, a high-ranking OSS cartographer. She was later posted to China, where she received the Emblem of Meritorious Civilian Service as head of the Registry of the OSS Secretariat.

Following the war, she lived in Washington, D.C., where she was married on September 1, 1946. Her husband came from an affluent family in Boston, Massachusetts. He had lived in Paris as an artist and poet. He joined the United States Foreign Service and also introduced his wife to fine cuisine. In 1948, they moved to Paris after the United States Department of State assigned Paul Child as an exhibits officer with the United States Information Agency to Paris, France.

Child repeatedly recalled her first meal in Rouen of oysters, sole meunière, and fine wine as a culinary revelation. She described the experience once in The New York Times newspaper as "an opening up of the soul and spirit for me". Thus, her fiery passion for French food began.

Child began avidly cooking at age 32 with no prior training or experience. While living in Paris, she attended the famous Le Cordon Bleu cooking school and later studied privately with master chefs, including Max Bugnard. She joined a womens' cooking club, Cercle des Gourmettes, where she quickly befriended Simone Beck. Simone and her friend Louisette Bertholle had the vision of writing a French cookbook for Americans and asked if Julia would help them write it. They'd hoped that her input would produce a book with greater appeal to Americans. 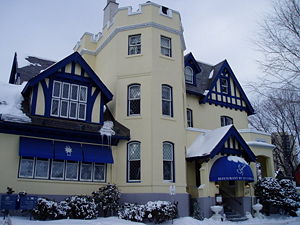 In 1951, the three women established their own informal cooking school L'Ecole des Trois Gourmandes (The School of the Three Gourmands). Over the next decade the ladies researched and repeatedly tested recipes. Child translated each classical French recipe into American English, deconstructed it, and gave the reader detailed instructions on the proper execution of each dish. She was revolutionary in the way that she took the confusion out of French cooking, putting even the most apprehensive of home chefs at ease.

The three women initially signed a contract with publisher Houghton Mifflin, which later rejected the manuscript for being too much like an encyclopedia. It was finally published for the first time in 1961 by Alfred A. Knopf. Craig Claiborne, reviewing the book for The New York Times in 1961, wrote: "Probably the most comprehensive, laudable, and monumental work on [French cuisine] was published this week, and it will probably remain the definitive work for nonprofessionals." It has since then proved to be exactly that. Hailed for its clear illustrations and for thrusting French Cuisine into the American mainstream, the 734-page book is still in print and is considered an indispensable culinary work. After great success with her book, Child wrote magazine articles, as well as a regular column for The Boston Globe newspaper.

In 1962, she appeared on a book review show on the Public Broadcasting Service station of Boston (WGBH). Viewers enjoyed the show on which Julia demonstrated how to cook an omelette, so much so that it led to the inception of her own cooking television show. The French Chef debuted February 11, 1963 on WGBH and was immediately successful. The show ran nationally for ten years and won Peabody and Emmy Awards, including the first ever Emmy Award for an educational program. Though she was not the first television cook, Child was the most widely seen. She attracted the broadest audience with her cheery enthusiasm, distinctively charming warbly voice, and unpatronising and unaffected manner.

Child's second book, The French Chef Cookbook, was a collection of the recipes she had demonstrated on the show. It was soon followed in 1971 by Mastering the Art of French Cooking, Volume Two, again in collaboration with Simone Beck. Child's fourth book, From Julia Child's Kitchen, was illustrated with her husband's photographs.

In the 1970s and 1980s, she was the star of numerous television programs, including Julia Child & Company and Dinner at Julia's. In the 1990s, she starred in many shows including Cooking with Master Chefs, In Julia's Kitchen with Master Chefs, Baking with Julia, and Julia Child & Jacques Pépin Cooking at Home, all of which featured guest chefs. She collaborated with Jacques Pépin many times for television programs and cookbooks. All of Child's books during this time stemmed from the television series of the same names.

Child was a favorite of audiences from the moment she debuted on public television in 1963. In 1966, she was featured on the cover of Time magazine with the heading, "Our Lady of the Ladle". In a 1978 Saturday Night Live sketch, she was affectionately parodied by Dan Aykroyd, continuing with a cooking show despite profuse bleeding from a cut to the thumb. Jean Stapleton portrayed her in a 1989 musical, Bon Appétit!, based on one of her televised cooking lessons. The title was based on her famous sign-off from her televised cooking shows: "This is Julia Child. Bon appétit!". She was also the inspiration for a character, "Julia Grownup", on the Children's Television Workshop program, The Electric Company (1971-1977), and was portrayed or parodied in many other television programs and skits.

She co-founded and helped fund the American Institute of Food and Wine. The Institute was created to "advance the understanding, appreciation and quality of wine and food", a pursuit she had already begun with her books and television appearances. She was also a strong supporter of Copia, The American Center for Wine and Food and the Arts, in Napa, California with vintner Robert Mondavi. There, Copia's elegant restaurant was named "Julia's Kitchen" in her honor. She received the French Legion of Honor in 2000 and the U.S. Presidential Medal of Freedom in 2003. Child also received honorary doctorates from Harvard University, her alma mater Smith College, and several other universities. 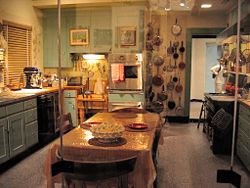 Julia Child's kitchen as seen on display at the National Museum of American History.

Her husband Paul, who was ten years older, died in 1994 after living in a nursing home for five years following a series of strokes in 1989.

In 2001, she moved to a retirement community in Santa Barbara, California, donating her house and office to Smith College. She donated her kitchen, which her husband designed with high counters to accommodate her diminished but still formidable height, and which served as the set for three of her television series, to the Smithsonian National Museum of American History, where it is now on display in Washington, D.C.

On August 13, 2004, Child died peacefully in her sleep of kidney failure at her home in Santa Barbara, at the age of 91.

Retrieved from https://www.newworldencyclopedia.org/p/index.php?title=Julia_Child&oldid=1080836
Categories:
Hidden category:
This page was last edited on 4 October 2022, at 21:08.
Content is available under Creative Commons Attribution/Share-Alike License; additional terms may apply. See Terms of Use for details.