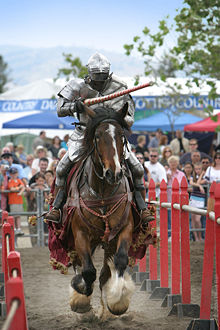 Jousting is a sport consisting of martial competition, usually between two mounted knights or other horsemen, using a variety of weapons, especially lances. Jousts could also involve contests on foot with battle axes, swords, and maces or other weapons. Another form of jousting is tilting at the rings, in which the galloping rider attempts to insert his lance through small metal or wooden rings.

Jousting is thought to have originated as an informal friendly contest between knights and was later included as a prelude to the main melee event at medieval tournaments. The first recorded tournament was staged in 1066. However, organized jousting did not gain in widespread popularity until the thirteenth century.

The joust permitted a display of individual skill and often offered large sums of prize money. In England, jousting was the highlight of the Accession Day tilts of King Henry VIII, Elizabeth I and James I, and was also part of the festivities at the marriage of Charles I. Many knights made their fortune in these events, while others lost their wealth or even their lives. Most famous of these deaths resulted when a shard of an opponent's broken lance went through the visor and into the eye of Henry II of France in 1559.

Famed in medieval romances, the sport maintained its status as a popular European event until the early seventeenth century. Today it has seen a modest resurgence at fairs, dinner theaters, and events organized by the International Jousting Association.

Jousting and the tournament 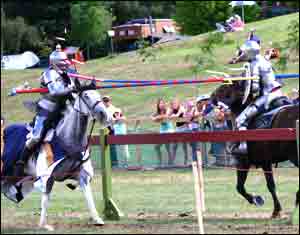 A historically correct reenactment of jousting in Taupo, New Zealand, 2006 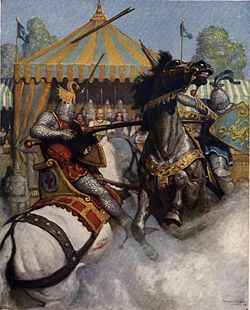 King Arthur and Queen Guinevere watch a joust from the stands: "Sir Mador's spear brake all to pieces, but the other's spear held."

Tournaments centered on the mêlée, a fight where the knights were divided into two sides and came together in a charge, followed by general combat. Jousting, on the other hand, is single combat between two knights. Jousting was a component of the tournament, but not usually its main feature, serving instead as an evening prelude to the grand charge on the day of the main event. However, since it featured individual knights of substantial fame, it sometimes distracted knights from the main event. Count Philip of Flanders, for example, made a practice in the 1160s of turning up armed with his retinue to the preliminary jousts and then delayed in joining the general mêlée until the initial battle was over. In the twelfth century, jousting was occasionally banned in tournaments because of its tendency to distract from the main event.

Jousting became a popular fixture in romantic tales during this period, the most famous being the stories of King Arthur's knights. By the early thirteenth century, jousting had its own devoted constituency. In the 1220s jousting events began to be held outside the tournament. Called "Round Tables," these were essentially an elimination event, held for knights and squires alike, in which the winners of preliminary rounds would move on to the next level until only one champion remained. The first mention of an exclusively jousting event was the Round Table held in Cyprus by John d'Ibelin, Lord of Beirut in 1223. The biographer of William Marshal, 1st Earl of Pembroke observed shortly later that in his day, noblemen were more interested in jousting than tourneying. Other forms of jousting also arose—such as armed combat without horses and tilting at rings. By the fourteenth century, with the decline of the tournament, jousting became the leading aristocratic sporting amusement.

The fourteenth century Chronicles of Froissart contains many details concerning jousting in medieval times. It relates that a war was even put on hold for a joust between the two sides. Other facets of the tradition mentioned in this source include: 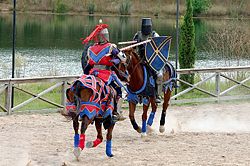 The lists and weapons

The lists, or list field, constituted the roped-off arena in which a jousting event or similar tournament was held. In the late medieval period, castles and palaces were augmented with special purpose-built tiltyards as a venue for jousting tournaments.

The skills and techniques used in jousting were first used in combat, as mounted knights would charge at their enemies with weapons to try to kill or disable them. The primary use of the jousting lance was to unhorse the other by striking him with the end of the lance while riding toward him at high speed. This is known as "tilting." Other weapons were used for jousting included maces, morning stars, various pole weapons, swords, and daggers. 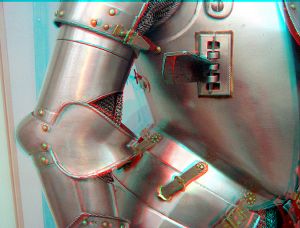 Jousting was popular from the Middle Ages until the early 1600s, during which time armor evolved considerably. In early jousts, armor was chain mail with a solid heavy helmet known as a "great helm" and shield. By 1400, knights wore full suits of plate armor, called a "harness." A full harness frequently included extra pieces specifically for use in jousting, so that a light combat suit could be reinforced with heavier "bolt-on" protective plates on the cuirass (breastplate) and helmet. Special jousting arm- and shoulder-pieces, which traded mobility for extra protection, were also added.

Special jousting helmets were sometimes used with narrow eye slits, made so that the wearer could only see out by leaning forwards. If the wearer straightened up just before the impact of the lance, the eyes would be completely protected. Some later suits had a small shield built into the left side of the armor. In some cases, this was spring-loaded to fly into pieces if struck properly by the opponent's lance.

Lances and other weapons

Lances were often decorated with stripes or the colors of a knight's coat of arms. They were normally of solid oak and a significant strike was needed to shatter them. However, they were intentionally kept blunt and would not usually penetrate the steel. The harnesses worn by the knights were lined on the inside with thick cloth to soften the blow from the lance. In modern times, jousting is often done for show or demonstration purposes, and the lances are usually made of light wood and prepared so that they break easily. 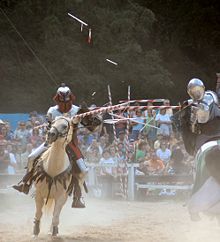 Broken lances are common in modern jousts. In this picture, airborne fragments of both lances are visible.

Since the goal of traditional jousts was to unhorse one's opponent, lances were normally the weapon of choice, although other spears and other pole arms were also sometimes used, as well as maces, morning stars, swords, and even daggers. However, these were more common in jousts that involved combat without horses. It is not by any means certain that swords were blunted for most of the history of the tournament, but this seems to have changed by the mid thirteenth century in jousting encounters. The statute of arms of Edward I of England of 1292 stipulated that blunted knives and swords should be used in tournaments, hinting that blunted weapons were not previously in general use.

The two most common kinds of horse used for jousting were chargers and destriers. Chargers were medium-weight horses bred and trained for agility and stamina, while destriers were heavy warhorses. These were larger and slower, but helpful to give devastating force to the rider's lance, as its weight was about twice as much as a traditional riding horse. The horses were trained for "ambling," a pace designed to provide adequate speed and consequent force, while also giving the rider enough stability to focus and aim with the lance.

Competing horses had their heads protected by a chanfron, an iron shield for protection from otherwise lethal lance hits. Other forms of equipment on the horse included long-necked spurs which enabled the rider to control the horse with extended legs, a saddle with a high back to provide leverage during the charge or when hit, as well as stirrups for the necessary leverage to deliver blows with the lance.

During a jousting tournament, the horses were cared for by their grooms in their respective tents. Grroms wore caparisons, a type of ornamental cloth featuring the owner's heraldic signs. 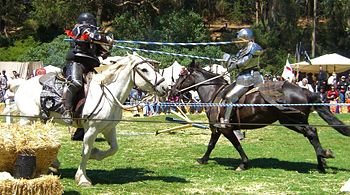 Tilting with a lance at a Renaissance Fair.

The most commonly seen form of jousting in the contemporary era is the theatrically-based variety of the sport in dinner theaters and Renaissance fairs. These are often carefully rehearsed for dramatic effect. Some Renaissance fairs feature competitive jousts, tilting at rings, or other jousting contests, in which the outcome is not predetermined.

As a competitive sport, modern-day jousting, or tilting, has been kept alive by the International Jousting Association, which has strict guidelines for the quality and authenticity of jousters' armor and equipment and has developed the use of breakable lance tips for safety. Jousting under the IJA rules follows a points system where points are given for breaking one's lance tip on the opposing knight's shield. However, no points given for unhorsing an opponent. IJA sanctioned tournaments also include skill at arms, where the riders display their horsemanship and weapons-handling skills with swords spears, and lances. Many IJA tournaments also include a mounted melee with fully armored riders using padded batons in place of swords for safety. These IJA events are never theatrically based, offering the public a chance to observe living history as opposed to the Renaissance Fair-type of entertainment jousting.

The Italian town of Foligno also holds an annual ring-jousting tournament, the Giostra della Quintana, that dates back to the 1613. The Italian town of Arezzo holds an annual tournament that dates to the Crusades. Jousters aim for a square target attached to a wooden effigy of a Saracen king, whose opposite arm holds a cat-o-three-tails. The riders strike the target with chalk-tipped lances and score points for accuracy, but must also dodge the cat-o-three-tails after they have struck the target. Ring jousting is the official state sport of Maryland, the first official sport of any American state. In Port Republic, Maryland, the annual Calvert County Jousting Tournament is held every August on the grounds of historic Christ Episcopal Church.