Joseph Echols Lowery (October 6, 1921 – March 27, 2020) was an American minister in the United Methodist Church and leader in the civil rights movement. He participated in most of the major activities of the civil rights movement in the 1950s and 1960s, and, after desegregation was achieved, continued his work focusing his attention on other civil rights issues into the twenty-first century. Lowery co-founded the Southern Christian Leadership Conference (SCLC) with Martin Luther King Jr. and others, and served it in various positions, including twenty years as president.

Known as the "Dean of the Civil Rights Movement," Lowery was tireless in his work for the rights of all people. In 2009, he received the Presidential Medal of Freedom from U.S. President Barack Obama in recognition of his outstanding efforts.

Joseph Echols Lowery was born to Leroy and Dora Lowery on October 6, 1921. His mother was a teacher and his father owned a small business in Alabama.[1] When he was 11, he was abused and punched by a white police officer, for not getting off the sidewalk as a white man was passing. Lowery ran home to get a gun, but his father arrived and talked him out of it.[2]

His family sent him away while he attended middle school in Chicago staying with relatives, but he returned to Huntsville, Alabama, to complete William Hooper Councill High School.[3] He attended the Knoxville College and Alabama A&M College. Lowery graduated from Paine College, where he was a member of Alpha Phi Alpha fraternity.[1]

Lowery attended ministerial training at Payne Theological Seminary and later on, he completed a Doctor of Divinity degree at the Chicago Ecumenical Institute.[3] Lowery served as pastor of the Warren Street Methodist Church (UMC) in Mobile, Alabama, from 1952 to 1961.[4]

In 1950, he married Evelyn Gibson, a civil rights activist and leader in her own right. She was the sister of the late Harry Gibson, an activist, and elder member of the Northern Illinois conference of the United Methodist Church, Chicago area. They had three daughters: Yvonne Kennedy, Karen Lowery, and Cheryl Lowery-Osborne.[5] Evelyn died on September 26, 2013.[6] Lowery also had two sons, Joseph Jr. and LeRoy III, from an earlier marriage to Agnes Moore.[7]

Often referred to as the "Dean of the Civil Rights Movement,"[4] Joseph Lowery participated in most of the major activities of the civil rights movement in the 1950s and 1960s.

After Rosa Parks' arrest in 1955, he helped lead the Montgomery bus boycott. Lowery headed the Alabama Civic Affairs Association, an organization devoted to the desegregation of buses and public places. In 1957, along with Martin Luther King Jr., Fred Shuttlesworth, and others, Lowery co-founded the Southern Christian Leadership Conference (SCLC), being elected its first vice-president. In 1957 he was named chairman of the SCLC board, and in 1977 he succeeded Ralph Abernathy as its president, serving in this position until 1997.[3][4] 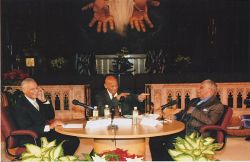 Along with his fellow activists, Lowery was subjected to violence and imprisonment. Lowery's car and other property, along with that of other civil rights leaders, was seized in 1959 by the State of Alabama to pay damages resulting from a libel suit. The Supreme Court of the United States later reversed this decision in New York Times Co. v. Sullivan.[9]

In March 1965, at Martin Luther King's request, Lowery chaired the delegation delivering the demands of the Selma-to-Montgomery march to Alabama Governor George Wallace. In 1995, as Lowery led the 30th Anniversary re-enactment of the historic march, Wallace gave a personal apology to Lowery for his conduct.[10]

Lowery was a co-founder and president of the Black Leadership Forum, a consortium of black advocacy groups. This Forum protested the existence of Apartheid in South Africa from the mid-1970s through the end of white minority rule there. Lowery was among the first five black men to be arrested outside the South African Embassy in Washington, D.C., during the Free South Africa movement.

He served as the pastor of Cascade United Methodist Church in Atlanta from 1986 through 1992, adding over a thousand members and leaving the church with 10 acres (40,000 m²) of land.[2]

Following his retirement from the ministry, he remained active in civic affairs, serving as a board member of Atlanta's public transportation system MARTA. As the chairman of MARTA's board, he was instrumental in securing millions of dollars in funding at the time of the 1996 Olympic Games.

Remarks at Vigil for Religious Freedom

Lowery was a vocal supporter against religious persecution, responding to the imprisonment of Rev. Sun Myung Moon on charges of tax evasion. In 1984, standing with Rev. Jerry Falwell and religious leaders of all races and faiths, he spoke strongly about the struggle that brings us all together:

We have got to understand that racism and religious bigotry today are twin plagues, inseparable twin plagues that folks who have been engaged in the racial struggle, we've understood all along. That's why it wasn't hard for me, a black Methodist preacher, to defend the religious liberty of a yellow Korean man who I can't understand most of the time. But what I do understand is that I'm not secure until his rights are secure. None is secure, until all of us are secure.[11]

In 2006, at Coretta Scott King's funeral, Lowery received a standing ovation when he denounced the violence of war in Iraq compared to injustice for the poor, remarking before four U.S. presidents in attendance:

We know now there were no weapons of mass destruction over there. But Coretta knew and we know that there are weapons of misdirection right down here. Millions without health insurance. Poverty abounds. For war billions more but no more for the poor![12]

Conservative observers said his comments were inappropriate in a setting meant to honor the life of Mrs. King, especially considering George W. Bush was present at the ceremony.[13]

On January 20, 2009, Lowery delivered the benediction at the inauguration of Senator Barack Obama as the 44th President of the United States of America. He opened with lines from "Lift Every Voice and Sing" by James Weldon Johnson, also known as "The Negro National Anthem." He concluded with the following, an interpolation of Big Bill Broonzy's "Black, Brown and White":

Lord, in the memory of all the saints who from their labors rest, and in the joy of a new beginning, we ask you to help us work for that day when black will not be asked to get [in] back, when brown can stick around, when yellow will be mellow, when the red man can get ahead, man; and when white will embrace what is right. Let all those who do justice and love mercy say Amen! Say Amen! And Amen! [14]

A number of conservative pundits including Glenn Beck and Michelle Malkin criticized this final passage, accusing it of being "divisive" and "racialist."[15] Reporters in attendance called the passage a mocking of racial stereotypes, and said that the crowd received it with good humor.[16][17] 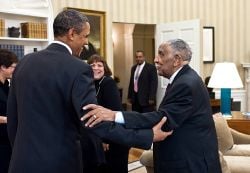 Joseph Lowery was a major figure in the Civil Rights Movement in the United States in the twentieth century, continuing the fight for civil rights into the twenty-first century, preaching for the freedom and rights of all people. Coretta Scott King once said Lowery had “led more marches and been in the trenches more than anyone since Martin.”[2] At age 69, he was named by Ebony as one of the 15 greatest black preachers, and described him as, "the consummate voice of biblical social relevancy, a focused voice, speaking truth to power."[18] He argued that to discriminate against a person because of the color of their skin or their faith is to discriminate against God, because it was God who made that person and God who called them to their faith.[11]

In his honor, the city government of Atlanta renamed Ashby Street for him. Joseph E. Lowery Boulevard is just west of downtown Atlanta and runs north-south beginning at West Marietta Street near the campus of the Georgia Institute of Technology and stretching to White Street in the "West End" neighborhood, running past Atlanta's Historically Black Colleges and Universities: Clark Atlanta University, Spelman College, Morehouse College, and Morris Brown College.[2]

Lowery received a number of significant awards. The NAACP gave him their Lifetime Achievement Award at its 1997 convention christening him the "Dean of the civil rights movement." He received the inaugural Walter P. Reuther Humanitarian Award from Wayne State University in 2003, along with many other honors.[19] He received the Martin Luther King Jr. Center Peace Award and the National Urban League's Whitney M. Young Jr. Lifetime Achievement Award, in 2004.[20] In 2004, Lowery was honored at the International Civil Rights Walk of Fame at the Martin Luther King Jr. National Historic Site, located in Atlanta, Georgia.[21]

In 2009, Lowery received the Presidential Medal of Freedom from U.S. President Barack Obama.[22] [23]