Jeane Jordan Kirkpatrick (November 19, 1926 – December 7, 2006) was an American ambassador and an ardent anticommunist. After serving as Ronald Reagan's foreign policy adviser during his 1980 campaign, she was nominated as the U.S. ambassador to the United Nations and was the first woman to hold this position. She is famous for her "Kirkpatrick Doctrine," which advocated U.S. support of anticommunist governments around the world, including authoritarian dictatorships. Along with Empower America co-directors William Bennett and Jack Kemp, she called on the Congress to issue a formal declaration of war against the "entire fundamentalist Islamist terrorist network" the day after the September 11 attacks on the World Trade Center. Kirkpatrick, like Reagan, began her political life as a Democrat, but like Reagan, she moved away from the Party as they moved away from their anti-communist stance. Kirkpatrick, whose views tended toward the libertarian perspective, held that individual liberty was the greatest guarantor of freedom.

Jeane Duane Jordan was born in Duncan, Oklahoma, the daughter of an oilfield wildcatter, Welcher F. Jordan, and his wife, the former Leona Kile. She attended Emerson Elementary School there and was known to her classmates as "Duane Jordan." At age 12, her father moved the family to southern Illinois, where she graduated from Mt. Vernon Township High School in Mt. Vernon, Illinois. In 1948, she graduated from Barnard College, after transferring from Stephens College in Columbia, Missouri. In 1968, Kirkpatrick received a doctorate in political science from Columbia University.

Though she was best known for her staunch conservatism, as a college freshman in 1945, she joined the Young People's Socialist League of the Socialist Party of America, a membership that was influenced by one of her grandfathers, who was a founder of the Populist and Socialist parties in Oklahoma.[1] As Kirkpatrick recalled at a symposium in 2002, "It wasn't easy to find the YPSL in Columbia, Missouri. But I had read about it and I wanted to be one. We had a very limited number of activities in Columbia, Missouri. We had an anti-Franco rally, which was a worthy cause. You could raise a question about how relevant it was likely to be in Columbia, Missouri, but it was in any case a worthy cause. We also planned a socialist picnic, which we spent quite a lot of time organizing. Eventually, I regret to say, the YPSL chapter, after much discussion, many debates, and some downright quarrels, broke up over the socialist picnic. I thought that was rather discouraging."

At Columbia University, her principal adviser was Franz Neumann, a revisionist Marxist. In 1967, she joined the faculty of Georgetown University, and became a full professor of political science in 1973.

She became active in politics as a Democrat in the 1970s, and was active in the later campaigns of former Vice President and Democratic presidential candidate Hubert Humphrey. Kirkpatrick published a number of articles in political science journals reflecting her disillusionment with the Democratic Party, and was especially critical of the foreign policy of Democratic President Jimmy Carter. Her best piece was "Dictatorships and Double Standards," published in Commentary (November 1979). It came to the attention of Ronald Reagan, for whom she became a foreign policy adviser and, after his election to the presidency, the United States Ambassador to the United Nations, a position she held for four years. (She asked him if he minded having a lifelong Democrat on his team; he replied that he himself had been a Democrat till age 51, and in any event he liked her way of thinking about American foreign policy.)

She was one of the strongest supporters of Argentina's military dictatorship following the March 1982 Argentine invasion of the United Kingdom's Falkland Islands, which triggered the Falklands War. Kirkpatrick sympathized with Argentina's President Gen. Leopoldo Galtieri, whose military regime clamped down on leftists (see Dirty War). Her support became muted when the administration ultimately decided to declare support for the British (see U.S. shuttle diplomacy during the Falklands War). 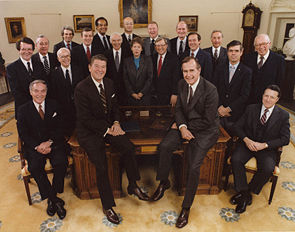 At the 1984 Republican National Convention, Kirkpatrick delivered the memorable "Blame America First" speech, in which she praised the foreign policy of the Reagan administration and excoriated the leadership of the "San Francisco Democrats"—the Democrats had just held their convention in San Francisco—for the party's shift away from the policies of former Democratic presidents such as Harry S. Truman and John F. Kennedy to a multilateral stance that de-emphasized assertive confrontation with foreign rivals, especially the Soviet Union—which she and Reagan termed the "evil empire."

When Marxist dictators shoot their way into power in Central America, the San Francisco Democrats don't blame the guerrillas and their Soviet allies. They blame United States policies of 100 years ago. But then they always blame America first (speech at the 1984 Republican National Convention).

In 1985, Kirkpatrick became a Republican and returned to teaching at Georgetown University. She also became a fellow at the American Enterprise Institute, a Washington D.C. think tank and a contributor to the American Freedom Journal. In 1993, she co-founded Empower America, a public-policy organization. She was also on the advisory board of the National Association of Scholars, a group that works against what it regards as a liberal bias in academia, with its emphasis on multicultural education and affirmative action.

She was a staunch supporter of the State of Israel. During her ambassadorship at the United Nations, she considered its frequent criticism and condemnation of the Jewish State as holding Israel to a double standard. She attributed it to hostility, and believed it was politically motivated. ADL President Abraham Foxman issued a press release upon her passing, saying that "She will be fondly remembered for her unwavering and valiant support of the State of Israel and her unequivocal opposition to anti-Semitism, especially during her tenure at the United Nations. She was always a true friend of the Jewish people."[2]

Kirkpatrick died at her home in Bethesda, Maryland, on December 7, 2006, of congestive heart failure.[4] She had been diagnosed with heart disease and had been in failing health for several years.

Explaining her disillusionment with international organizations, especially the United Nations, she stated:

About socialist activism, she said:

Wikiquote has a collection of quotations related to:
Jeane Kirkpatrick

Retrieved from https://www.newworldencyclopedia.org/p/index.php?title=Jeane_Kirkpatrick&oldid=1074772
Categories:
Hidden category:
This page was last edited on 31 July 2022, at 04:27.
Content is available under Creative Commons Attribution/Share-Alike License; additional terms may apply. See Terms of Use for details.