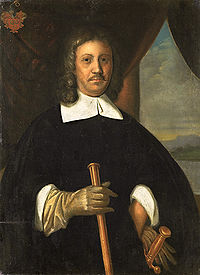 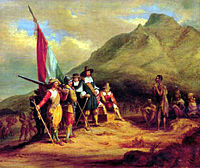 Johan Anthoniszoon "Jan" van Riebeeck (April 21, 1619 – January 18, 1677), was a Dutch colonial administrator and founder of Cape Town. Commissioned by the Dutch East India Company, the merchant Jan van Riebeeck established the European settlement in South Africa at Cape Town, anchoring in the bay at the foot of the Table Mountain on April 6, 1652. Cape Town is called the Mother City to this day.

Jan van Riebeeck has been viewed as the founding father of their nation by many of the Afrikaner population of South Africa. His image appeared on stamps and currency for many years, and April 6 used to be known as Van Riebeeck's Day.

Jan van Riebeeck was born on April 21, 1619 in Culemborg in the Netherlands, as the son of a surgeon. He grew up in Schiedam, where he married Maria de la Quellerie on March 28, 1649. The couple had eight sons, one of whom, Abraham van Riebeeck, became a Governor-General of Dutch East Indies.

Van Riebeeck joined the Dutch East India Company and sailed to Batavia in April 1639, as an assistant surgeon, having learned the craft from his surgeon father. From there he went to Japan, and in 1645, Van Riebeeck was given charge of the company trading station at Tongking (Tonkin, now in Vietnam). Van Riebeeck was recalled from the post in Tongking by the Dutch authorities when it was discovered that he was conducting trade for his own account.[1]

On his voyage back from and Indochina, the ship stopped for 18 days in the sheltered Table Bay, near the Cape of Good Hope at the south end of Africa. While there, van Riebeeck realized that the area could supply passing ships with fresh produce.

His observations were not unique. Various ship's officers were recommending that the Dutch East India Company establish a way station for the arduous voyage from Europe to the East Indies to allow ships to take on fresh water, fresh food, offload the sick, and to make repairs to ships. Death rates from scurvy could impact as much as 40 percent of the crew on long voyages. The causes and cure of scurvy wouldn't be well-understood for another one hundred years. It was well known in the mid-seventeenth century that sufferers usually recovered quickly on land.

It was known to van Riebeeck that wine, especially young red wine, sometimes carried on ships instead of water, could prevent scurvy. The Cape of Good Hope is a good region for wine, and when he returned six years later, he imported vine cuttings from Europe. The grapes were first pressed in the autumn of 1659.[2]

After the British decided against establishment of a colony at the Cape of Good Hope, the Dutch realized the strategic and economic importance of the Cape. Van Riebeeck had been instructed to establish a strong base to provide the company's ships with fresh groceries, mainly meat and vegetables, on the long journey from Europe to Asia.

Did you know?
Jan van Riebeeck established the ship refreshment post that became the city of Cape Town

Van Riebeeck was assigned with the task of establishing a ship refreshment post at the Cape of Good Hope at the southern end of Africa. On April 6, 1652, Van Riebeeck landed at the Cape with three ships; the Reijer, the Dromedaris, and the Goede Hoop. He was accompanied by 82 men and 8 women, including his wife of two years, Maria. His commission had included five ships. The ships Walvisch and the Oliphant arrived late, having had 130 burials at sea.

He landed three ships Drommedaris, Reijger, and Goede Hoop at the future Cape Town after a three month voyage, and set up camp near the water's edge, under Table Mountain and fortified the site as a way-station for the VOC trade route between the Netherlands and the East Indies. Van Riebeeck's first direction was to erect the "Fort de Goede Hoop" for the settlers' own protection.

The VOC had no desire for either the conquest or the administration of a territory in southern Africa. Their interest was to ensure the provision of vital supplies to their shipping fleets on their way to and from the Dutch East Indies. Van Riebeeck's specific instructions were not to colonize the Cape but to build a fort, to erect a flagpole for signaling to passing ships, and to build pilot boats to escort passing ships safely into the bay.

The first winter was wet and filled with hardships. Of the 82 who landed with Van Riebeeck, 19 succumbed to the elements. The settlers landed two months before winter set in and constructed living quarters of wooden huts. Following the construction of the fort, they laid out a large garden and started to grow fruit and vegetables. However the climate proved quite different from the Netherlands' and as their gardens were washed away, their food supplies dwindled.[1]

Van Riebeeck served as commander of the Cape of Good Hope from 1652 to 1662. He was charged with building a fort, improving the natural anchorage at Table Bay, planting fruit and vegetables, and obtaining livestock from the indigenous Khoikhoi people. Initially inclined toward bartering for meat from game animals, the Khoikhoi (who the Dutch settlers called Goringhaikwa and later Kaapmans) reacted with unpleasantness as the demands of the Dutch grew to meet the mounting number of ships passing and seeking replenishment. As the Dutch farmed further and further inland, the Khoi people viewed the Dutch settlers more and more as poachers on land that they had settled and farmed for 30,000 years. After years of increasing demands, in 1659, the Khoi people reacted violently, but by then the settlement had grown strong and easily repulsed the outbreak, forcing the Khoi further inland.

Van Riebeeck was commander of the colony at the Cape of Good Hope until 1662. After that, he was promoted to Secretary to the Governor-general of the Dutch East Indies and served there from 1665 to 1677. He never returned to live in the Netherlands.

His wife, Maria, died in Malacca, now part of Malaysia, on November 2, 1664, at the age of 35, enroute to van Riebeeck's new assignment. Van Riebeeck died in Batavia (now Jakarta) on the island of Java in 1677.

Jan van Riebeeck is of cultural and historical significance to South Africa. Many of the Afrikaner population view him as the founding father of their nation. His image appeared ubiquitously on stamps and the South African currency from the 1940s up until 1993 when the South African Reserve Bank changed the currency to an apolitical design of the fauna and flora of the region.

April 6 used to be known as Van Riebeeck's Day, and later as Founders' Day but the holiday was abolished by the ANC government after the democratic elections of 1994. Van Riebeeck's image no longer features on any official currency or stamps, but statues of him and his wife remain standing in Cape Town.

The coat of arms of the city of Cape Town is based on the Van Riebeeck family coat of arms.

The "company gardens" where vegetables were grown are now a park in the middle of Cape Town. In the Kirstenbosch Botanical Gardens in Cape Town, there is a wild almond hedge still surviving that was planted on van Riebeeck's orders as an outer barrier. The initial fort was made of mud, clay, and timber, and had four corners, or bastions. The fort later became a pentagonal stone structure known as The Castle of Good Hope, or just The Castle, which was built between 1666 and 1679, several years after van Riebeeck left the Cape, has five bastions, and is made of brick, stone, and cement.

Van Riebeeck reported the first comet discovered from South Africa, C/1652 Y1, which was spotted on December 17, 1652. Like many other charted comets, it has not returned to earth's view.

Jan Van Riebeeck's administration started a tradition in 1658, by banishing Autshumato, a Khoikhoi interpreter, to an island in Table Bay for his crimes against the Dutch authorities. The Dutch called it Robben Island after the seals living there. Many years later, other political prisoners, including Nelson Mandela, would also be sent to Robben Island.[2]