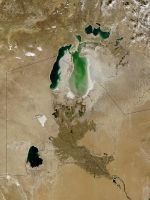 The Aral Sea, in 2003, had shrunk to well under half of the area it had covered 50 years before
The Aral Sea a landlocked endorheic sea in Central Asia, straddles the boundary between Uzbekistan to the south and west and Kazakhstan to the north and east. The name roughly translates as "Sea of Islands," referring to more than 1,000 islands of 2.5 acres (one hectare) or more that dotted its waters. Once the fourth-largest lake on Earth, the Aral Sea shrank to less than 50 percent its original size in a matter of decades as a result of the diversion of its in-flowing rivers, the Syr Darya and the Amu Darya for irrigation purposes. By the end of the twentieth century, the once great sea had been broken into two separate lakes.
Popular Article: Printing press

Printing press from 1811
A printing press is a mechanical device to print many copies of text on a medium such as paper or cloth. The machine applies pressure to an inked surface resting on the medium, thereby transferring an image. Invention of the printing press has generally been credited to Johannes Gutenberg, a German goldsmith. Both woodblock printing and movable type printing technologies had been developed in ancient China and Korea a few hundred years earlier, but their presses differed from that used by Gutenberg and their impact was limited. Printing methods based on Gutenberg's printing press spread rapidly first across Europe and then the rest of the world. Books became widely available and affordable, leading to a dramatic rise in the adult literacy rate throughout Europe.
Did you know?

Winner of the Nobel Prize in Literature in 2002, Imre Kertesz, was a Holocaust concentration camp survivor (read more)