Hockey is a sport that is not only one of the major sports in the United States, but also extremely popular throughout the world. Hockey can be classified as a family of sports because of the diverse forms that the game has evolved into worldwide. The competition is between two teams which try to maneuver a ball, or a hard, round disc called a puck, into the opponent's net or goal, using a hockey stick.

The most popular form of the game is ice hockey. It is one of the more physical sports, and one of the four major professional sports in North America. The sport itself is played on numerous levels, including men and women's NCAA hockey. It originated as a pastime in Canada, but has become popular in almost all parts of the world, especially the colder areas, where hockey can be played outdoors on ice. The sport's popularity in the United States is concentrated in certain regions, notably the Northeast, the Midwest, and Alaska.

All versions of hockey require hard work, discipline, and teamwork to succeed. 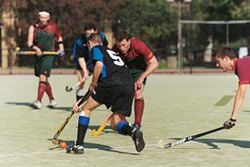 Field hockey is played on gravel, natural grass, sand-based or water-based artificial turfs, with a small, hard ball. The game is popular among both males and females in many countries of the world, particularly in Europe, India, Pakistan, Australia, New Zealand, South Africa, and South Asia. In most countries, the game is played between single-sex sides, although it can be played by mixed-sex sides. In the United States and Canada it is played predominantly by women.

The 116-member governing body is the International Hockey Federation (FIH). Field Hockey has been played at each summer Olympic Games since 1908 (excluding 1924).

Modern field hockey sticks are J-shaped and constructed of a composite of wood, glass fiber or carbon fiber (sometimes both) and have a curved hook at the playing end, a flat surface on the playing side and curved surface on the rear side.

There are 4,000-year-old drawings in Egypt of a game resembling field hockey being played. While modern field hockey appeared in the mid-eighteenth century in England, primarily in schools, it was not until the first half of the nineteenth century that it became firmly established. The first club was created in 1849 at Blackheath in south-east London. 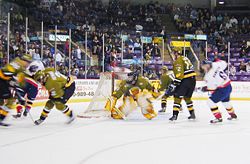 Ice hockey is played on a large flat area of ice, using a three inch (76.2 mm) diameter vulcanized rubber disc called a puck. This puck is often frozen before high-level games to decrease the amount of bouncing and friction on the ice. The game is contested between two teams of skaters. The game is played all over North America, Europe and in many other countries around the world to varying extent.

The 64-member governing body is the International Ice Hockey Federation, (IIHF). Men's ice hockey has been played at the Winter Olympics since 1924, and was in the 1920 Summer Olympics. Women's ice hockey was added to the Winter Olympics in 1998. North America's National Hockey League (NHL) is the strongest professional ice hockey league, drawing top ice hockey players from around the globe. The NHL rules are slightly different from those used in Olympic ice hockey–the periods are 20 minutes long, counting downwards. There are three periods. In some situations, the puck is frozen prior to the start of a game to limit bouncing.

There are early representations and reports of hockey-type games being played on ice in the Netherlands, and reports from Canada from the beginning of the nineteenth century, but the modern game was initially organized by students at McGill University, Montreal in 1875 who, by two years later, codified the first set of ice hockey rules and organized the first teams.

A minor penalty, which occurs when a player other than the goalie closes his hand on the puck, deliberately falls on the puck, or gathers the puck under his body while lying on the ice.

Other forms of Hockey

Another popular form of hockey is road hockey, sometimes known as street hockey. While this is a similar variation to field hockey, there are distinct differences. The first of which is the minimal contact allowed in road hockey, and the limited use of protective gear. Although there is still contact, it is not as fierce as in field or ice hockey. There is no bodychecking allowed in this sport. 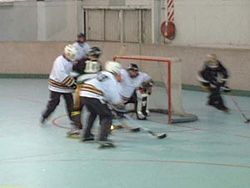 Inline hockey is a variation of roller hockey very similar to ice hockey, from which it is derived. Inline hockey is played by two teams, consisting of four skaters and one goalie, on a dry rink divided into two halves by a center line, with one net at each end of the rink. The game is broken down into four 15-minute periods with a variation of the ice hockey off-side rule. Icings are also called, but are usually referred to as illegal clearing. For rink dimensions and an overview of the rules of the game, see IIHF Inline Rules. Some leagues and competitions do not follow the IIHF regulations, in particular USA Inline and Canada Inline[1]. 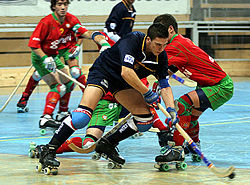 Roller hockey (Quad) Roller Hockey is the overarching name for a roller sport that has existed long before inline skates were invented. Roller hockey has been played in 60 countries worldwide and thus has many names worldwide. Sometimes the sport is called Quad Hockey, Hóquei em Patins, International Style Ball hockey, Rink hockey and Hardball hockey depending on the part of the world it is played. Roller Hockey was a demonstration rollersport in the 1992 Barcelona Summer Olympics. 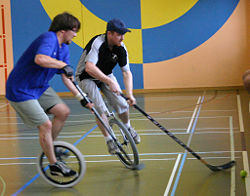 Unicycle hockey is similar to roller or inline hockey; however, each player must be mounted on their unicycle—with both feet on the pedal—to play at the ball. The ball is of a similar weight and bounce to a "dead" tennis ball and sticks are identical to roller hockey sticks. Each team consists of four players and one goalie, and substitution is allowed at any point in the game. Two common penalties are SUB (Stick Under Bike) and SIB (Stick In Bike) and result in a free shot being awarded to the player that was fouled. In addition, players must also keep one hand on the end of the stick at all times and never allow the head of the stick to be lifted above waist height.

All forms of hockey

Other games derived from hockey or its predecessors include the following:

Injury potential penalties Injury potential penalties include butt ending, checking from behind, head butting, spearing, board checking, charging, cross checking, elbowing/kneeing, high sticking, holding the face mask, slashing, and roughing. A linesman may report these infractions occurring behind the play to the referee (following the next stoppage of play) if the referee did not see them.

Interference Making body contact with an opponent who does not have possession of the puck. Interference is also called when a player is standing in the crease or otherwise makes contact with the goaltender.

One-timer Shooting the puck immediately upon receiving it without stopping it first. A one-timer is an effective way to beat the goalie before he can slide from one side of the crease to another.

Penalty killing When a team is shorthanded and attempts to prevent the opposition from scoring, this activity is known as "penalty killing."

Power play When a team has more players on the ice than the opposition due to one or more penalties against the opposing team.

Red line The line that divides the rink into two equal parts. This area is center ice.

Shoot-out Some minor and international leagues refine the overtime situation by having their teams play a five-minute sudden death period, and if no one scores, the game is decided by a shoot-out. Each team picks five players, and each one of them takes a penalty shot on the other team's goalie, skating in by themselves with the puck from center ice and trying to score. Whichever team scores more wins.

Sniper A player who is a pure goal scorer and who doesn't hit other players or the boards all that much.

A wrist shot is used to shoot the puck off the blade of the stick with a flicking motion of the wrist.

The vehicle used to prepare the rink's ice surface before the game and after each period. The Zamboni scrapes a thin layer off the ice, heats the ice, and puts down a fresh layer of heated water that freezes to form a new layer of ice.