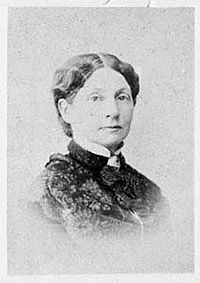 Helen Pitts (1838 - 1903) was an American suffragette and the second wife of Frederick Douglass. She also created the Frederick Douglass Memorial and Historical Association.[1] Her controversial marriage to an African American man was radical at the time but also revolutionary in the scope of human affairs. The push for greater rights for women, notably the right to vote, was also controversial and trailblazing during the time period. Her efforts helped to lead towards the eventual equality of women and minorities within the political and social landscape of the United States, albeit within a very great stretch of time. Pitts is remembered for her courage in challenging what was assumed to be the norm and for fighting for true freedom and equality in an era when such behavior was highly shunned, especially among women.

She was born in Honeoye, New York. A descendant of John Alden and Priscilla Alden, who sailed to America on the Mayflower, Pitts graduated from Mount Holyoke College (then Mount Holyoke Female Seminary) in 1859. Her father, Gideon Pitts, was a farmer. Her mother was Jane Willis Pitts. The couples were firm abolitionists who also harbored feminist sentiments that they commuted to their oldest daughter, as was apparent in the path that she would carve out for herself in life.[2] After the Civil War, she taught at the Hampton Institute. In 1880, Helen moved to Uniontown and lived next door to Frederick Douglass's home, Cedar Hill.

She was active in the women's rights movement and co-edited The Alpha, with Caroline Winslow, in Washington. In 1882, Frederick hired Helen as a clerk in the office of the Recorder of Deeds in Washington, which he had just been assigned to. As he was writing his autobiography, Life and Times of Frederick Douglass, and was often lecturing, Helen aided him frequently in his work. Frederick shared an interest in the women's rights movement at the time, as the fundamental aims and principals espoused by its advocates were shared by those who help a strong belief in abolitionist sentiment.[3]

Frederick's first wife, Anna Murray Douglass, died on August 4, 1882. Frederick (after a year of depression) controversially married Helen, a white woman, on January 24, 1884.[4] They were married by Rev. Francis J. Grimké who was also of mixed ancestry. Despite the fact that Helen's parents, Gideon and Jane Pitts, were abolitionists who had admired Douglass highly in the past, they were against the marriage, as Frederick was the son of a white father and an African American mother, and remained so throughout the course of their lives.[5] The marriage was generally the subject of scorn by both white and African American residents in the town, though the Douglasses were firm in their convictions. Douglass's children from his first marriage to an African American woman resented the fact that their father had taken a white woman as his new bride, feeling as though he was secretly harboring a belief that a white wife was of more value.[5] Black Americans as a whole also felt somewhat betrayed by Douglass's actions in selecting Pitt as his bride. In actuality, Douglass's marriage was an affirmation of his personal belief in American unity and equality, and also revealed his desire towards the forging of a true melting pot of cultures within the United States as a whole.[6] "Love came to me, and I was not afraid to marry the man I loved because of his color," she said. Frederick laughingly commented, "This proves I am impartial. My first wife was the color of my mother and the second, the color of my father."[7] Douglass never actually met his father, but was reminded throughout his lifetime that his father was a white man; the assertion that he himself was a biracial man provided the basis of his defense of his marriage to a white woman.[8] A main source of support was Elizabeth Cady Stanton.[9] Helen and Frederick were married for eleven years until his sudden death from a heart attack in 1895. Douglass was an advocate of equal rights for women. On the day he died he gave a speech on the topic of female equality and was a believer in granting women the right to vote as well.[10]

Building a memorial to Frederick Douglass

Douglass' will left Cedar Hill to his wife, but it lacked the number of witnesses (3 were required by local D.C. law)[11] needed in bequests of real estate and was ruled invalid. Helen suggested to his children and their spouses that they agree to set Cedar Hill apart as a memorial to their father and deed it to a board of trustees. The children declined, insisting that the estate be sold and the money divided among all the heirs.

Helen worked tirelessly to amass the funds needed to purchase the home of her belated husband. She was assisted by several organizations, such as the National Federation of Colored Women's Clubs.[11] With borrowed money, Helen bought the place. She then devoted the rest of her life to planning and establishing the Frederick Douglass Memorial and Historical Association. Besides effecting passage of the law incorporating the association, she worked to raise funds to maintain the estate. For eight years she lectured throughout the northeast.

During the last year of her life, Helen was ill and unable to lecture, as well as discouraged by the falling off of contributions for her cause. She begged the Rev. Francis Grimke not to let her work fall by the wayside in her absence. He suggested that, if the mortgage on Cedar Hill should not be paid off in her lifetime, money from the sale of the property should go to two college scholarships in her and Frederick's names. She agreed on the condition that the scholarships be in his name only.

After her death, the $5,500 mortgage was reduced to $4,000, and the National Association of Colored Women, led by Mary B. Talbert of Buffalo, raised funds to buy Cedar Hill. Administered by the National Park Service, the Frederick Douglass Memorial Home conducts tours to inform visitors of Douglass' contributions to freedom.[12]

Helen Pitts was a revolutionary woman within the conservative and restrictive nineteenth century world in which she lived. She was not afraid to express her love for a man of the opposite race or to appeal to the masses for the equal treatment and political and social rights of women. Her efforts, in combination with those of other peers of the era, would help to lead to the eventual changes that transformed the American political and social landscape. Women and minorities would come to gain greater rights and freedoms on par with those previously only enjoyed by white men throughout the country. Pitts should be remembered for her willingness to take a stand and, thus, for her part in the larger scheme of effecting radical changes to the treatment of women and minorities in the larger political landscape of the United States of America.

Retrieved from https://www.newworldencyclopedia.org/p/index.php?title=Helen_Pitts&oldid=1008258
Categories:
Hidden category:
This page was last edited on 13 December 2017, at 22:19.
Content is available under Creative Commons Attribution/Share-Alike License; additional terms may apply. See Terms of Use for details.