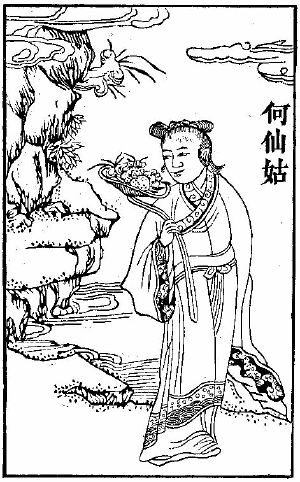 A typical representation of He Xiangu in Chinese iconography.

He Xiangu (meaning "Immortal Woman He") (Wade-Giles: "Ho Hsien-ku" ) is the only female deity among the Eight Immortals figures in Daoism. She is often described as a morally pure woman, an ideal daughter, and a selfless seeker after spiritual freedom. In iconography, she is typically pictured bearing a lotus flower or a peach (of immortality). She is one of the few female deities revered as members of the Daoist pantheon.

He Xiangu is one of the illustrious Eight Immortals (Ba Xian), a group of Daoist/folk deities who play an important role in Chinese religion and culture. While they are famed for espousing and teaching Daoist philosophy and cultivation practices, they are also figures of popular myth and legend that are known for their devotion to the downtrodden and their collective lifestyle of “free and easy wandering.” Though they are most often depicted and described in the context of their group, each has their own particular set of tales, iconography, and areas of patronage.

Accounts of He Xiangu's assumption into the ranks of the immortals can be found numerous times throughout the vast corpus of Chinese folktales and literature.

In the most popular account, He Xiangu is characterized as a poor peasant girl living during the T'ang dynasty (618-907 C.E.). When she was about 14 or 15, she was visited in a dream by an immortal, who instructed her to eat powdered stones from the bank of a distant mountain stream. The divine being told her that this would make her body as light as air and would render her immune from death.[1] Waking from her slumber, she was so moved by this numinous vision that she resolved to follow every detail of the instructions and also vowed to remain a virgin (as a means of dedicating herself utterly to the task of becoming worthy of immortality).

After a long and arduous trek to the mountain stream, she consumed the powdered stone and, as promised, she was suddenly able to traverse huge distances in a single stride while simultaneously requiring less and less physical sustenance. However, she remained a devoted daughter and used her powers as a means of providing for her elderly parents, flitting from mountaintop to mountaintop and gathering the finest fruits, herbs and minerals for them. Later on, after her parents died, she felt the hold of the material world beginning to slip, and she gradually ceased eating all mortal food.

Meanwhile, the Empress Wu, desiring the secrets of immortality for herself (as a means of consolidating her power) dispatched a messenger to summon He Xiangu to visit her at the palace. The young immortal, realizing the ruler's immoral motivations, chose to depart from the world and, much to the bafflement of the royal messengers, ascended into heaven.[2]

In the second version, He Xiangu is described as a beautiful but impoverished young girl who is forced to become the servant of a wretched old harpy. In a Cinderella-esque fashion, her thankless master forced her to toil ceaselessly, despite the laxity of her own lifestyle. One day while the old woman had left for the market, the young lady's toils were interrupted by a group of beggars, who humbly pleaded with her for some rice noodles to fill their gnawing bellies. Though she knew that the old woman would be furious if she found out, He Xiangu's heart went out to the destitute men and she offered to cook them a small meal, which they accepted and ate graciously. Unfortunately, no sooner had the mendicants left than the girl's mistress returned.

When the miser old woman assayed the contents of her larder, she flew into a rage and demanded to be told where her precious food had gone, accusing her young servant of stealing it for herself. He Xiangu, beside herself with fear, admitted to her what had happened. Hearing this, the old woman rebuked her severely and threatened to beat her senseless if she could not find the beggars to verify her story. The frightened girl ran off down the road, eventually intercepting the beggars and beseeched them to return with her.

When she returned, mendicants in tow, the old woman attacked them all, both verbally and physically. Eventually, the cruel master forced the beggars to vomit up the noodles that they had eaten and ordered poor He Xiangu to eat them herself, as a lesson in the importance of other people's property. Weeping, the poor young girl raised the disgusting morsel to her lips.

Suddenly, the moment that she steeled herself to the repugnant task ahead of her, He Xiangu began to feel strange. She floated off the ground, leaving her cruel mistress behind. When the old shrew turned to attack the beggars, she saw that they too were vanishing into the sky. The Immortals "had come to earth to test the young girl's character and she had proved herself worthy of immortality. Because she had endured suffering without complaint and given to the poor without thought for herself, she could work alongside the Immortals for eternity."[3]

In summary, though these two versions vary considerably (both in style and substance), they all contain a number of commonalities. Most notably, He Xiangu is consistently described as a moral exemplar who is given immortality as a reward for her selfless conduct (though the moral standards vary depending on the prevalence given to Confucian versus Daoist precepts). Also, her femininity is emphasized (whether it be through a vow of chastity, depictions of her beauty or simply through descriptions of her proper "daughterly" conduct)—a fact that likely emerges from the dearth of positive female role-models within the Daoist pantheon.

In graphic depictions, He Xiangu is easily recognized, as she is the only definitively female member of the Eight Immortals (with the androgynous Lan Caiho as a possible exception). Further, she is typically portrayed playing a sheng (a Chinese reed organ), or carrying a peach (a reference to the Queen Mother of the West's peaches of immortality) or a lotus flower (a potent religious trope likely borrowed from Buddhist symbology).[4]

Given her gender, it is not surprising that He Xiangu is seen as the patron of women—especially of women seeking religious truth (limited though their options were in historic China). However, she is rarely (if ever) venerated or worshiped in absentia (i.e. without the other immortals).[5]