Guppy is the common name for the various small, freshwater, live-bearing fish in the species Poecilia reticulata of the Poecilidae family of the order Cyprinodontiformes.

As small as guppies are (about 1.5 inches (4 cm) in length), they still are a well-known species. Also known as the millionsfish (Agbayani 2007a), the guppy is one of the most popular freshwater aquarium fish species in the world, as it is a hardy, prolific breeder, and the males are often beautifully colored. Guppies are popular also for experimental research. In the wild, they contribute to the ecosystem as part of freshwater food chains. Thus, as with other fish, while guppies advance their own individual purposes of survival and reproduction they also offer larger ecological, commercial, and aesthetic values.

The guppy, Poecilia reticulata, is a member of the subfamily Poeciliinae (livebearers) in the cyprinodontiform family Poeciliidae. The various Poeciliidae (poeciliids) species occupy both freshwater and brackish water environments; they occur in the New World from North America to South America and Africa (including Madagascar) (Nelson 1994). Members of Poeciliidae are characterized by having pectoral fins placed high on the side of the body (Nelson 1994), pelvic fins placed in an anterior position, and pleural ribs connected to the first several haemal arches (Nelson 1994). As cyprinodontiformes (Order Cyprinodontiformes), they have a symmetrical caudal (tail) fin supported internally by one epural bone, and they manifest a generally marked sexual dimorphism with the males often brightly colored (Nelson 1994).

The subfamily Poeciliinae, to which guppies belong, are characterized by livebearing (except Tomeurus), with the males having an elongated anterior anal fin ray (gonopodium) used for fertilizing the female internally and with females producing eggs with large yolks that germinate while still inside the female(Nelson 1994). Members of this subfamily are found from the Eastern United States south to Argentina and Uruguay (Nelson 1994). In addition to guppies, other popular aquarium fish belonging to this subfamily include the mosquitofishes (Gambusia affinis and Gambusia holbrooki), the mollies (also in genus Poecilia, such as the sailfin molly, Poecilia latipinna), and the swordtail and platies of the genus Xiphophorus.

The genus Poecilia to which the guppy belongs, is one of about 22 genera in the subfamily Poecillnae. Nelson (1994) recognizes 49 species in the genus, but others separate the many species of limias into their own genus, Limia.

The guppy, Poecilia reticulata is a small member of the Poecilidae family, with females typically 4–6 centimeters (1.5–2.5 inches) long and males about 2.5–3.5 centimeters long (1–1.5 inches). Like all other members of the family except the genus Tomeurus (which is egg-laying), the guppy is live-bearing.

Guppies are native to the Caribbean and parts of south America, specifically the islands of Trinidad and Tobago, Antigua and Barbuda, Barbados, Netherlands Antilles, and the U.S. Virgin Islands, and the South American countries of Brazil, Guyana, and Venezuela (Agbayani 2007b).

However, guppies have been introduced to many different countries on all continents, except Antarctica. Sometimes this has occurred accidentally, but most often as a means of mosquito control, the hope being that the guppies would eat the mosquito larvae, slowing down the spread of malaria. In many cases, these guppies have had a negative impact on native fish faunas.

There is a great deal of variety between the populations, many with distinctive coloring or patterning. Those that live in habitats where predators are common tend to be less vividly decorated as a protective measure. Populations that deal with fewer predators are much more colorful. Recent studies suggest that vividly colored males are favored via sexual selection (handicap principle) while natural selection via predation favors subdued tones. As a result, the dominant phenotypes observed within a reproductively isolated community are a function of the relative importance each factor has in a particular environment. 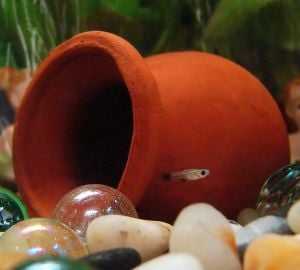 Guppy fry in an aquarium, one week old

Occasionally, male guppies may behave aggressively toward each other, engaging in fin-nipping and other bullying behavior. Guppies live in complex social networks, choosing social partners and remembering them (Croft et al. 2004).

Guppies are highly prolific livebearers, with females producing up to two hundred offspring each time (generally between thirty and sixty), and having a gestation period of less than one month (typically 22 to 30 days). They can conceive again only a few hours after giving birth.

Robert John Lechmere Guppy discovered this tiny fish in Trinidad in 1866, and the fish was named Girardinus guppii in his honor by Albert C. L. G. Gunther later that year. However, the fish had previously been described by Wilhelm Peters in 1859 on material collected from South America. Although Girardinus guppii is now considered a junior synonym of Poecilia reticulata, the common name "guppy" still remains (Agbayani 2007c). Over time guppies have been given a variety of taxonomic names, although Poecilia reticulata is the name currently considered to be valid. 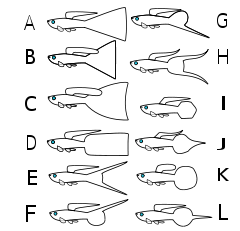 The guppy prefers a hard water aquarium and can withstand levels of salinity up to 150 percent that of normal sea water (Chervinski 1984), which has led to them being occasionally included in marine tropical community tanks, as well as in freshwater tropical tanks. Guppies are generally peaceful, though nipping behavior is sometimes exhibited between male guppies or toward other members of the family like platys and swordtails and occasionally other fish with prominent fins such as angelfish. Its most famous characteristic is its propensity for breeding, and it can breed in both fresh water and marine aquariums (Shikano and Fujio 1997).

Guppy breeding by aquarists produces variations in appearance ranging from color consistency to fantails and "spike" swordtails. Selective breeding has created an avid "fancy guppy" collector group, while the "wild" guppy maintains its popularity as one of the hardiest aquarium fish.

Experienced aquarists breeding their own guppies are aware that the adults will eat their young and, therefore, provide safe zones for the fry. Specially designed livebearer birthing tanks, which can be suspended inside the aquarium, are available from aquatic retailers. These serve the dual purpose of shielding the pregnant female from further attention from the males, and of providing a separate area for the newborn young as protection from being eaten by their mother. Although if a female is put in the breeder box too early or late it will cause her to have a miscarriage.