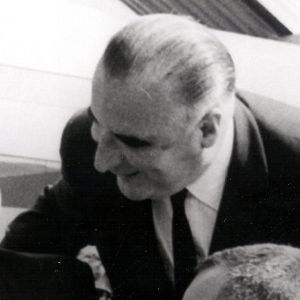 Georges Jean Raymond Pompidou (July 5, 1911 – April 2, 1974) was President of France from 1969 until his death in 1974. His initial appointment as Prime Minister of France in 1962, when he was not even a member of the National Assembly, was due to the patronage of Charles de Gaulle whom he had served in various capacities. Although he broke with de Gaulle in 1969, Pompidou as President pursued policies similar to de Gaulle's and is generally considered to have been a Gaullist. This was especially true on the international stage, where he continued to develop relations with the Arab world and to insist on the independence of French foreign policy from that of other leading Western powers, especially the United States.

Pompidou is remembered for his handling of the student protests of 1968 when he favored conciliation and reform and for reversing de Gaulle's refusal to allow Britain to join the European Community during Edward Heath's premiership. Pompidou had power thrust upon him. He did not enter politics with a view to gain power or to achieve personal success but because he was asked to do so by a man whom he admired, Charles de Gaulle. A teacher by training, he was able to use his intellect to succeed in several different careers. He served his country well, and through an initiative that he inspired in combating the illegal international traffic in drugs, his influence continues to work to make the world a healthier place. The policy of independence in international affairs that both he and de Gaulle pursued has been perpetuated by subsequent French administrations, often pitting France against other Western powers as a constraining voice against use of force and in favor of the peaceful resolution of differences.

Georges Pompidou was born in the commune of Montboudif, in the department of Cantal in central France where his father was a schoolteacher. After his two years preparatory school (khâgne) at Lycée Louis-le-Grand, where he befriended Senegalese poet and statesman Léopold Sedar Senghor, he went on to graduate from the École Normale Supérieure with a degree in literature. He then taught literature at a French high school (lycée). In 1935 he married Claude Jacqueline Cahour, who was studying law in Paris. Their daughter was born with Down's Syndrome; Alain, their foster son was born in 1942. During World War II Pompidou served as an army lieutenant. He won the Croix de guerre. He first met the then leader of the Free French, Charles de Gaulle in 1944, joining his personal staff. He proved adept at interpreting de Gaulle's ideas and communicating these to a wider audience. Between 1944 and 1949 he held various posts under de Gaulle, including master of requests, (or petitions) at France's highest administrative court.

In 1953 he was hired by Guy de Rothschild to work at the bank de Rothschild Frères where he rose to high rank, despite lacking relevant professional qualifications. In 1956, he was appointed the bank's general manager, a position he held until 1962. In 1959, after de Gaulle's return to power, he again became his personal assistant, playing a significant part in drafting what became the consititution of the Fifth Republic. However, following de Gaulle's election as President in January 1959, Pompidou resumed his role at the bank. In 1961, his services were again called upon by de Gaulle, this time to negotiate in secret with the Algerian freedom-fighters, which led to a cease fire.

Although Pompidou had been a close confidante and colleague of the President, these roles had not exposed him to the public-at-large. However, this changed in April 1962, when de Gaulle appointed him as his Prime Minister, even though he was not a member of the National Assembly. His incumbency was short lived, as he resigned in October after losing a vote of confidence in the Assembly. By December he was again Prime Minister, re-appointed by de Gaulle and this time he remained in office until 1966. Two further terms in office followed, 1966-1967 and 1967-1968, longer than anyone else had held the office in recent history. De Gaulle dismissed him in 1968. To this day Pompidou is the longest serving French prime minister under the Fifth Republic. In 1964, he was faced with a miners' strike. He led the 1967 legislative campaign of the Union of Democrats for the Fifth Republic to a narrow victory. Pompidou was widely regarded as being responsible for the peaceful resolution of the student uprising of May 1968. His strategy was to break the coalition of students and workers by negotiating with the trade-unions and employers. The student protestors were generally in favor of more Socialist policies but they also wanted educational reform. One issue was employees sharing in company profits, on which Pompidou made some concessions. Pompidou tried to avoid confrontation and to pursue negotiations in order to diffuse the situation, demonstrating his inclination toward conciliation. De Gaulle did not support all the reforms that Pompidou suggested. Until this crisis, he was the Prime Minister of a quiet and prosperous France.

During the May 1968 events, disagreements arose between Pompidou and de Gaulle. Pompidou did not understand why the President had informed him of his sudden decision to depart from the Presidency before his resignation in April, 1969. Their relationship, until then very good, would be strained from then on. Pompidou led and won the 1968 legislative campaign, then resigned. Nevertheless, in part due to his actions during the May 1968 crisis, he appeared as the natural successor to de Gaulle. Pompidou announced his candidature for the Presidency in January 1969, a few weeks before de Gaulle's wife was named in the "Markovic affair," which was a political scandal confirming rumors of the President's status as a cuckold. Pompidou was certain that de Gaulle's inner circle was responsible for this smear.

After the failure of the 1969 referendum that would have reduced the Senate into an advisory body, de Gaulle resigned and Pompidou was elected president of France, defeating in the second round by a wide margin the Centrist chairman of the Senate and Acting President Alain Poher. Though a Gaullist, Pompidou was more pragmatic than de Gaulle, notably allowing the United Kingdom to join the European Community in 1973. He embarked on an industrialization plan and initiated the Arianespace project. He was skeptical about the "New Society" programme of his prime minister, Jacques Chaban-Delmas. In 1972, Chaban-Delmas was replaced by Pierre Messmer, a more conservative Gaullist. He continued many of de Gaulle's foreign policies, such as maintaining cordial relations with the Arab world and with former French colonies in Africa. Relations with West Germany were somewhat strained, but relations with the United States improved. De Gaulle had withdrawn from NATO in 1966 and generally pursued foreign relations policies that distanced France from the U.S., using the United Nations Security Council to maintain an independent French polity within world affairs. De Gaulle had insisted on France being a Permanent Member of the Security Council against Winston Churchill's view that France no longer had the status of a world power. What has been called the "policy of Grandeur" under both de Gaulle and Pompidou represents France's own struggle to come to terms with its role in the post-World War II and post-colonial contexts, especially in face of the crisis in Algeria.

Unlike Great Britain, France did not emerge from the war unambiguously on the victor's side, due to the Vichy regime's willing collusion with the Third Reich. The development of the French nuclear deterrent was part of the policy of independence, of self-reliance, hence withdrawal in 1966 from NATO. Use of the term "Grandeur" implies that insistence on the role of France in world affairs involves more than a little posturing, claiming more influence than France can actually exert. Nonetheless, France had kept open relations where others have closed them, and has been a voice of caution in a world that was often too eager to act without thinking through all the possible consequences. Under Pompidou's Presidency, the French economy was strong.

While the left-wing opposition organized itself in proposing a Common Programme before the 1973 legislative election, Pompidou widened his "presidential majority" by including the Centerist pro-European parties. During a visit to the United States in 1970, he attracted demonstrations by American Jews who disliked his pro-Arab policies.

The "Group to Combat Drug Abuse and Illicit Trafficking in Drugs" was established in 1971 as an intergovernmental body at Pompidou's suggestion.

While still in office, Pompidou unexpectedly died from a rare cancer called Waldenström macroglobulinemia in 1974.

Retrieved from https://www.newworldencyclopedia.org/p/index.php?title=Georges_Pompidou&oldid=682392
Categories:
Hidden category:
This page was last edited on 2 April 2008, at 14:32.
Content is available under Creative Commons Attribution/Share-Alike License; additional terms may apply. See Terms of Use for details.