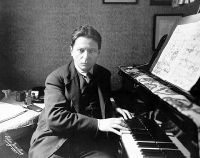 George Enescu (pronunciation in Romanian: /'ʤěor.ʤe e'nes.ku/; known in France as Georges Enesco) (August 19 1881, Liveni – May 4, 1955, Paris) was a Romanian composer, violinist, pianist, conductor, and teacher. He was the preeminent Romanian musician of the twentieth century, one of the greatest performers of his time.

Enescu exhibited a profound understanding of the large-scale form which made his symphonies and concertos very popular amongst his audiences. As a teacher of students such as Yehudi Menuhin and Dinu Pilatti, Enescu was known for his prodigious memory of the compositions he studied as well as composed and inspired his students to do the same. His most popular composition is the Romanian Rhapsody #1 where he kept alive the ethnic wealth and beauty of his homeland. Pablo Casals called Enescu "the most amazing musician since Mozart." 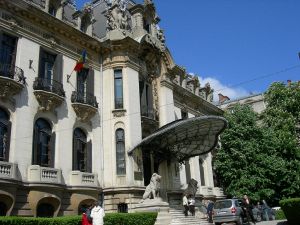 He was born in the village of Liveni, Romania (Dorohoi County at the time, today Botoşani County), and showed musical talent from early in his childhood. His father presented him to the professor and composer Eduard Caudella, who admitted him to the Iaşi Conservatoire. At the age of seven, he was guided to continue his studies at the Vienna Conservatory. Here he studied with great professors such as Joseph Hellmesberger, Jr., Robert Fuchs, and Sigismond Bachrich, and graduated before his thirteenth birthday, earning the silver medal. In his Viennese concerts young Enescu played Brahms, Sarasate and Mendelssohn. In 1895 he went to Paris to continue his studies. He studied violin with Martin Marsick, harmony with André Gédalge, and composition with Jules Massenet and Gabriel Fauré.

Many of Enescu's works were influenced by Romanian folk music, his most popular compositions being the Romanian Rhapsodies (1901–2), the opera Oédipe (1936), and the suites for orchestra. He also wrote five symphonies, a symphonic poem Vox maris, and much chamber music (three sonatas for violin and piano, two for cello and piano, a piano trio, quartets with and without piano, a dixtuor, an octet for strings, a piano quintet, a chamber symphony for twelve solo instruments). Some of his creations were composed in Sinaia, at his villa in Luminiş.

Enescu was the second husband of Maria Tescanu Rosetti, (née Cantacuzino), a woman of noble Greek descent; he found her palace on Calea Victoriei (now the Muzeu Naţional George Enescu, dedicated to his work) a bit too grand, and the couple lived mainly in an outbuilding at the rear.

In 1923 he made his debut as a conductor in a concert given by the Philadelphia Orchestra in New York. He also conducted the New York Philharmonic between 1937 and 1938.

He lived in Paris and in Romania, but after World War II and the communist occupation of Romania, he remained in Paris.

On his passing in 1955, George Enescu was interred in the Père Lachaise Cemetery in Paris.

The symphony orchestra of Bucharest is named in his honor; that city also houses a museum in his memory.

Enescu’s published output extends to only 33 opus numbers, though several of these are very large-scale works (the three symphonies and Oedipe). The demands of a busy career as a performer were not the only reason for this comparative paucity of finished output. Enescu was also an obsessive perfectionist: many of his published works were repeatedly redrafted before their first performances, and revised several times thereafter. Moreover, as recent research has made increasingly clear, the works which he did allow to be published were merely the tip of a huge submerged mass of manuscript work-in-progress (the bulk of which is held by the Enescu Museum, Bucharest). The leading authority on these manuscripts, Clemansa Firca, suggests that there may be ‘several hundred’ compositions in varying degrees of rough draft or near-completion. In some cases, too, the same thematic material would be re-worked in manuscript for decades before emerging in one of the published works.

Such inner continuities are obscured, however, by the striking stylistic changes that took place during Enescu’s seven decades as a composer. His first student works (from Vienna and his early Paris years) show the heavy influence of Schumann and Brahms. French influence comes to the fore with his Second Violin Sonata (1899), where the fluid piano textures and delicate combination of chromaticism and modal cadences are strongly reminiscent of Gabriel Fauré. This sonata, written at the age of 17, was later described by Enescu as the first work in which he felt he was ‘becoming myself’. Yet, for the next 15 years or more, he continued to switch eclectically between a variety of stylistic idioms. His Octet for Strings (1900) combines rich late-Viennese chromaticism with ferocious contrapuntal energy; the First Symphony (1905) is an ambitious and sweepingly Romantic work with an explicit debt to Tristan und Isolde in the slow movement; but interspersed with these compositions were a number of neo-classical or neo-Baroque works, including the First Orchestral Suite (1903), the Second Piano Suite (1903) and the limpid Sept chansons de Clément Marot (1908), in which the piano part imitates, at times, the sonorities of lute music. The culmination of his series of neo-classical works was the Second Orchestral Suite (1915), whose bustling mock-Baroque figurations foreshadow Prokofiev’s Classical Symphony (1917) and Stravinsky’s Pulcinella (1919). Yet, almost contemporaneously, Enescu’s dense and intricate Second Symphony (1914) explored the harmonic world of Richard Strauss’s Salome and Elektra.

Traditional accounts of Enescu’s musical development place great emphasis on the elements of Romanian folk music which appear in his works at an early stage – above all, in the Poème roumain (1897) and the two Romanian Rhapsodies (1901). (These latter works were to become an albatross round Enescu’s neck: later in his life he bitterly resented the way they had dominated and narrowed his reputation as a composer.) But he quickly tired of the limited possibilities offered by the task of ‘setting’ Romanian songs and dances; as he remarked in 1924, the only thing a composer could do with an existing piece of folk music was ‘to rhapsodize it, with repetitions and juxtapositions’.

The real significance of his Romanian folk-heritage would emerge later in the growth of Enescu’s musical language, as he searched for new ways of developing, and combining, pure melodic lines. Particularly influential here was the doina, a type of meditative song, frequently melancholic, with an extended and flexible line in which melody and ornamentation merge into one. (This was the type of song for which Béla Bartók had coined the phrase parlando rubato.) The melodic line was, for Enescu, the vital principle of music: as he wrote in his autobiography, ‘I’m not a person for pretty successions of chords … a piece deserves to be called a musical composition only if it has a line, a melody, or, even better, melodies superimposed on one another’. His urge to superimpose melodies led, in several early works, to some exorbitant uses of cyclical form: in the last movement of the Octet for Strings, for example, all the melodic elements of the work return, to be piled one on top of another. In his mature works, however, Enescu made increasing use of the less mechanically contrapuntal, more organic technique of heterophony – a form of loose melodic superimposition which was also rooted in Romanian folk music.

Some elements of Enescu’s mature style began to emerge at the end of World War I, with the completion of the Third Symphony (1918) and the First String Quartet (1920). Both works display an organicist style of development, in which germinal themes, intervals and note-patterns are constantly adapted and recombined. As Enescu worked on his opera Oedipe during the 1920s, this method lent itself naturally to the elaboration of leitmotifs: one modern study (by Octavian Cosma) has identified 21 such motifs in the work, although their functioning is so germinal and cellular that it is possible for listeners to experience the whole work without being aware of the presence of leitmotifs at all. Another feature of the opera is the minutely detailed orchestration, which frequently makes use of solo instruments within the orchestral texture. This concentration on individual voices may help to explain why the output of his final decades is dominated by chamber music. Only two major orchestral works were completed after Oedipe: the Third Orchestral Suite (1938) and the symphonic poem Vox Maris (c1954). (Three works left in unfinished draft have, however, been completed recently by Romanian composers: the Caprice roumain for violin and orchestra (1928), completed by Cornel Ţăranu, and the Fourth (1934) and Fifth (1941) symphonies, completed by Pascal Bentoiu.)

The great series of chamber works which crowns Enescu’s output begins with the Third Violin Sonata (1926), and includes the Piano Quintet (1940), Second Piano Quartet (1944), Second String Quartet (1951) and Chamber Symphony (1954). Enescu stays within the bounds of late-Romantic tonality and classical forms but transmutes both into a very personal idiom; ceaseless motivic development is woven into elaborate adaptations of sonata form, variation-sequences and cyclical recombinations. Romanian folk elements are also present, sometimes in the form of percussive Bartókian dances, but the most characteristic use of folk music here involves the meditative doina. In several works (the Third Orchestral Suite, the Impressions d’enfance for violin and piano (1940) and the Third Violin Sonata, as commented on by Enescu) the use of such folk elements was linked to the theme of childhood reminiscence: what Enescu aimed at was not the alienating effect of quasi-primitivism which modernists sought in folk music (Stravinsky, for example), but, on the contrary, a childlike sense of immediacy and intimacy. That, indeed, is the special character of many of his finest works.