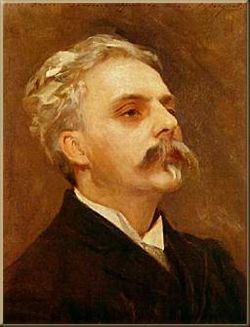 Gabriel Urbain Fauré May 12, 1845 – November 4, 1924) was a French composer, organist, pianist, and teacher. He was the foremost French composer of his generation, and his musical style influenced many twentieth century composers. His harmonic and melodic language affected how music theory and composition were later taught.

Gabriel Urbain Fauré was born in Pamiers, Ariège, Midi-Pyrénées, to Toussaint-Honoré Fauré and Marie-Antoinette-Hélène Lalène-Laprade. Fauré was sent to live with a foster-nurse for four years. At the age of nine, he was sent to study at the École Niedermeyer, a school that prepared church organists and choir directors in Paris, and continued there for 11 years. He studied with several prominent French musicians, including Camille Saint-Saëns, who introduced him to the music of several contemporary composers, including Robert Schumann and Franz Liszt.

In 1870 Fauré enlisted in the army and took part in the action to raise the Siege of Paris during the Franco-Prussian War. During the Paris Commune he stayed at Rambouillet and in Switzerland, where he taught at the transported École Niedermeyer. When he returned to Paris in October 1871, he was appointed assistant organist at Saint-Sulpice as an accompanist to the choir, and became a regular at Saint-Saëns' salon and at the salon of Pauline Garcia-Viardot. Here he met many prominent Parisian musicians and he formed the Société Nationale de Musique.

In 1874 Fauré stopped working at Saint-Sulpice and began to fill in at the Église de la Madeleine for Saint-Saëns during his many absences. When Saint-Saëns retired in 1877, Fauré became choirmaster. In the same year he became engaged to Marianne Viardot, daughter of Pauline, but Marianne later broke off the engagement. Following this disappointment he traveled to Weimar, where he met Liszt, and to Cologne in order to see productions of Richard Wagner's Der Ring des Nibelungen. Fauré admired Wagner, but was one of few composers of his generation not to come under his influence.

In 1883 Fauré married Marie Fremiet, with whom he had two sons. In order to support his family Fauré spent most of his time in organizing daily services at the Église de la Madeleine and teaching piano and harmony lessons. He only had time to compose during the summers. He earned almost no money from his compositions because his publisher bought them, copyright and all, for 50 French francs each. During this period Gabriel Fauré wrote several large scale works, in addition to many piano pieces and songs, but he destroyed many of them after a few performances, only retaining a few movements in order to re-use motives.

During his youth Fauré was very cheerful, but his broken engagement combined with his perceived lack of musical success led to bouts of depression that he described as "spleen." In the 1890s, however, his fortunes reversed somewhat. He had a successful trip to Venice where he met with friends and wrote several works. In 1892 he became the inspector of the music conservatories in the French provinces, which meant he no longer had to teach amateur students. In 1896 he finally became chief organist at the Église de la Madeleine, and also succeeded Jules Massenet as composition instructor at the Conservatoire de Paris. At this post he taught many important French composers, including Maurice Ravel and Nadia Boulanger.

From 1903 to 1921, Fauré was a critic for Le Figaro. In 1905 he succeeded Théodore Dubois as director of the Paris Conservatory. He made many changes at the conservatory, leading to the resignation of a number of faculty members. This position meant that he was better off in terms of money, and he also became much more widely known as a composer.

Fauré was elected to the Institut de France in 1909, but at the same time he broke with the old conservative Société Nationale de Musique, and supported the rogue group that formed out of those ejected from the Société, which was mainly comprised of his own students. Unfortunately, during this time Fauré's hearing began to weaken. Sound not only became fainter, but it was also distorted so that pitches on the low and high ends of his hearing sounded like other pitches.

His responsibilities at the conservatory, combined with his hearing loss, meant that Fauré's output was greatly reduced during this period. During World War I, Fauré remained in France. In 1920, at the age of 75, he retired from the conservatory. In this year he also received the Grand-Croix of the Légion d’Honneur, an honor rare for a musician. He suffered from poor health, partially brought on by heavy smoking. Despite this, he remained available to young composers, including members of "Les Six," who were devoted to him.

Fauré died in Paris from pneumonia in 1924. He was given a state funeral at the Église de la Madeleine and is buried in the Cimetière de Passy in Paris.

Fauré is regarded as the master of the French art song, or mélodie. His works ranged from classical music—in his early years he emulated the style of Joseph Haydn and Felix Mendelssohn—to romantic music, and finally to an aesthetic twentieth-century classical music. His work was based on a strong understanding of harmonic structures that he received at the École Niedermeyer from his harmony teacher Gustave Lefèvre, who wrote the book Traité d’harmonie (Paris, 1889). In this book Lefèvre sets forth a harmonic theory that differs significantly from the classical theory of Jean-Philippe Rameau in that seventh and ninth chords are no longer considered dissonant, and the mediant can be altered without changing the mode. In addition, Fauré's understanding of the church modes can be seen in various modal passages in his works, especially in his melodies.

In contrast with his harmonic and melodic style, which pushed the bounds for his time, Fauré's rhythmic motives tended to be subtle and repetitive, with little to break the flow of the line, although he did utilize subtle large-scale syncopations, similar to those found in Johannes Brahms’ works.

Fauré's piano works often use "arpeggiated" figures with the melody interspersed between the two hands, and include finger substitutions natural for organists. These aspects make them daunting for some pianists, but they are nonetheless central works.

Though he met Liszt and was fascinated by Wagner, Fauré sought a distinctive style in his piano pieces and numerous songs, which had to be composed during summer holidays. Recognition came slowly owing to the modernity of his music.

Fauré's stylistic development can be traced from the sprightly or melancholy song settings of his youth to the bold, forceful late instrumental works, traits including a delicate combination of extended tonality and modality, rapid modulations to remote keys and continuously unfolding melody.

Fauré was a prolific composer, and among the most noteworthy of his works are his Requiem, the opera Penelope, the orchestral suite Masques et Bergamasques (based on music for a dramatic entertainment, or divertissement comique), and music for Pelléas et Mélisande. He also wrote chamber music; his two piano quartets are particularly well known. Other chamber music includes two piano quintets, two cello sonatas, two violin sonatas, and a number of piano pieces. He is also known for his songs, such as Après un rêve, Les roses d'Ispahan, En prière, and several song cycles, including La Bonne Chanson with settings of poems by Paul Verlaine.

Requiem, Op 48, was not composed to the memory of a specific person but, in Fauré’s words, "for the pleasure of it." It was first performed in 1888. Fauré is thought not to have had strong religious beliefs. It has been described as "a lullaby of death." In setting the requiem he left out the Dies irae poem, though the reference to the day of judgment appears in the Requiem libera me, which he added to the normal mass. Several slightly different versions of the Requiem exist, and these have given rise to a number of different recordings. Personal grief may have influenced the composition as it was started after the death of his father, and before it was completed, his mother passed away as well. Requiem can thus be seen as an expression of Faure's personal tragedy written after the death of his parents. Requiem is also acknowledged as a source of inspiration for the similar setting by Maurice Duruflé.

His music is used in "Act I: Emeralds" of George Balanchine's ballet Jewels (1967).