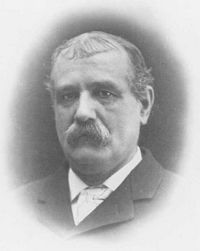 Francis Amasa Walker (July 2, 1840 – January 5, 1897) was a United States army general, economist, and educator. He was famous for his economic theories on wages and profit which discredited the previously accepted "wages-fund" theory that wages were based on preexisting capital assigned for the cost of labor. A pioneer in using statistical data to illustrate economic arguments, Walker strove to establish the "scientific" status of economics. A strong proponent of capitalism, he developed a theory of the entrepreneur and entrepreneurial profit as their "wages" for successful work.

However, later in his career Walker became rather narrow in his beliefs, particularly regarding the issue of immigration. He feared that new immigrants to the United States posed a social and economic threat to those already established families, and advocated government action to restrict further immigration. Although at the end of the nineteenth century, many American citizens were protective of their hard-won way of life, the fears of men like Walker that new immigrants would reduce their quality of life, or fail to assimilate into American life, proved unfounded.

Francis Amasa Walker was born in Boston, Massachusetts, on July 2, 1840, into the family of distinguished economist and politician Amasa Walker. His father inevitably had great influence on his son’s life, particularly in his interest for law and economics. Walker graduated from Amherst College in 1860, where he studied law.

With the beginning of the American Civil War in 1861, Walker joined the Northern army. Walker was particularly skillful in analyzing the enemy troop strength and their position. He showed himself to be a great tactician, and soon rose from the rank of sergeant-major to that of brevet brigadier general of volunteers. The rank was awarded to him at the personal request of General Winfield Scott Hancock. He was wounded at the Battle of Chancellorsville, and captured at Ream's Station, where he was sent to the famous Libby Prison in Richmond, Virginia. His health seriously deteriorated and after the war he left army service.

Walker then worked as editor of the Springfield, Massachusetts ‘‘Republican,’’ and chief of the government bureau of statistics. He supervised both the ninth (1870) and tenth (1880) census. He also served as U.S. commissioner of Indian Affairs from 1871 to 1872.

In the 1870s, Walker turned entirely to academic work. From 1872 to 1880 he was professor of political economy at the Sheffield Scientific School at Yale. In 1878, he represented the United States at the Monetary Conference in Paris, and from 1885-1892 he served as the first president of the American Economic Association. He was also president of the American Statistical Association from 1883 to 1897.

From 1881 to his death, he was president of Massachusetts Institute of Technology (MIT). He contributed toward increasing the resources and numbers of the institution. During his tenancy at MIT, the number of students increased from 302, when he started as president, to 1198, when he died. He also worked on promotion of general school education and actively participated in debates on monetary and other government issues.

Walker stayed at MIT until his death in Boston on January 5, 1897. The Walker Memorial, a students' clubhouse, and one of the MIT buildings on the Charles River, was dedicated in 1916 in his honor.

Walker was a prolific writer, especially on topics in economics, and is regarded as an original and powerful thinker. He tried to establish economics as a scientific discipline, and used statistics as a tool in economic study. His ideas can be classified as Neoclassical, with a strong influence of American Institutionalism. As such, Walker represents the definitive split from classical economics.

One of the Walker’s most important contributions to economic theory is his theory of wages. With his 1876 book The Wages Question, he demolished the old Classical “wages-fund” theory. He also restructured the Ricardian theory of rent and proposed a theory of distribution that became a foundation for later marginal productivity theory of distribution. He supplemented the trinity of land, capital, and labor, or in terms of distribution, of rent, interest, and wages, with a new entity—management and the earnings of management:

Under free and full competition, the successful employers of labor would earn a remuneration which would be exactly measured, in the case of each man, by the amount of wealth which he could produce, with a given application of labor and capital, over and above what would be produced by employers of the lowest industrial, or no-profits, grade, making use of the same amounts of labor and capital, just as rent measures the surplus of the produce of the better lands over and above what would be produced by the same application of labor and capital to the least productive lands which contribute to the supply of the market, lands which themselves bear no rent. (Quarterly Journal of Economics April, 1887)

Walker was a great proponent of capitalist society:

At every step of its progress capital follows one law. It arises solely out of saving. It stands always for self-denial and abstinence" with interest “as the reward of abstinence." (First Lessons in Political Economy 1889)

He saw industrialization as beneficial for the society and advocated for entrepreneurship. Walker argued that entrepreneur profit functions as their wages, and thus he disregarded Marxist notions of class struggle based on the parasitic nature of entrepreneurship. As working people worked for wages, so do entrepreneurs. Profits, then, are an added increment of management, secured by foresight and business skill; and since they flow solely from the entrepreneur, they belong to him alone and no portion may be justly claimed for rent, interest, or wages:

It appears that the gains of the employer are not taken from the earnings of the laboring class, but measure the difference in production between the commonplace or bad, and the able, and shrewd, and strong management of business. (Political Economy 1888).

Walker was also interested in monetary issues, advocating bimetallism. He did not, however, seek to justify any one nation in the attempt to maintain parity between gold and silver.

In his later career, Walker became more conservative in his stands, an apologist of the Gilded Age, and staunch critic of Henry George, socialists, and populists. He was especially harsh on the question of immigration. He believed that immigrants negatively influence the “native” population, as with the greater influx of immigrants the “quality of the general population deteriorates.” His views were typical for his time, when Darwinian notions of racial inequality placed the Anglo-Saxon race above all others. Walker was particularly inspired by the work of American sociologist Edward A. Ross, who prophesized the extinction of the white race if government did not react.

Walker also observed that the “native” American family size was decreasing, and sought to explain it in sociological and economic terms. According to him, as the result of the increasing number of immigrants coming to work for lower wages, Americans become less willing to have large families, fearing for the future of their children. Walker thus proposed a restricted immigration policy, believing it would have a beneficial effect on the U.S. population. The issue of immigration became a matter of public debate in the early 1910s and 1920s heightening racial and class tensions, remaining an active problem throughout the twentieth century.

Francis A. Walker's work The Wages Question gave the final blow to the old "wages-fund" theory of wages, and as such laid the foundation for John Bates Clark's descriptions of the marginal products of labor and capital. Walker’s interest in the nature of management and his explicit categorization of the corporation’s profit into wages, rent, and profits, was foundational to Frank Hyneman Knight's work.

Retrieved from https://www.newworldencyclopedia.org/p/index.php?title=Francis_Amasa_Walker&oldid=1004439
Categories:
Hidden category:
This page was last edited on 24 April 2017, at 22:24.
Content is available under Creative Commons Attribution/Share-Alike License; additional terms may apply. See Terms of Use for details.