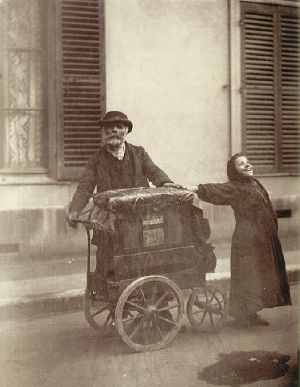 Eugène Atget (1857 – 1927) was a French photographer noted for his photographs documenting the architecture and street scenes of Paris, from a few years before the beginning of the twentieth century until shortly before his death in 1927. His work was not well-known or appreciated during his lifetime except to a few curators and other artists, but he is now usually regarded as being one of the world's greatest photographers ever, and his photographs are exhibited in the Museum of Modern Art in New York, the George Eastman House, the J. Paul Getty Museum in Los Angeles, the Bibliotheque Nationale de France, and elsewhere.

Atget was born in the French city of Bordeaux. He was orphaned at age seven and raised by his uncle. In the 1870s, after finishing his education, Atget briefly became a sailor and cabin boy on liners in the Transatlantic passage. After shipping on several voyages, Atget became an actor, more specifically, a bit player, for a second-rate repertory company, but without much success.

Atget retained a bohemian affection for the working man and worried about the petty tradesmen and merchants threatened by modernization and the rise of big Paris department stores. He was said to be short-tempered and eccentric. In his 50s he stopped eating anything except bread, milk and sugar. He and his wife, Valentine, a former actress, hung out with some of Paris' leading dramatists—though he left behind no portraits of friends or associates.

His death went largely unnoticed at the time outside the circle of curators who had bought his albums and kept them interred, mostly unseen. Atget would likely have been indifferent to his relative obscurity, given his preference for work over fame. "This enormous artistic and documentary collection is now finished," he wrote of his life's work in 1920, though he kept on shooting for several years after.

American photographer Berenice Abbott (1898-1991) provided the key that unlocked Atget's Paris for the rest of the world. She got to know him in the 1920s when she was an assistant to Atget's Montparnasse neighbor, Man Ray. After Atget's death, she arranged for New York's Museum of Modern Art to buy many of his prints and Atget soon became better known in the U.S. than in France.

Atget finally settled in Paris, as a painter-turned-photographer in the 1890s. Despite Atget's limited background in the visual arts, he saw photography as a source of income, selling his photographs to artists in the nearby town of Montparnasse. He advertised his photographs as "documents for artists." It was common practice at the time for painters to paint scenes from photographs. By the mid-1890s, Atget bought his first camera and began to photograph more than 10,000 images of the people and sights of the French capital. By 1899, he had moved to Montparnasse, where he lived and earned a modest income until his death in 1927.

Atget photographed Paris with a large-format wooden bellows camera with a rapid rectilinear lens. The images were exposed and developed as 18x24cm (7 x 9.4 inches) glass dry plates. Besides supplying fellow artists, architects, publishers, and interior decorators with his photographs of a dream-like Paris, he was also commissioned by city bureaus and the Carnavalet Museum to preserve and record landmarks in France's capital city.

Distinguishing characteristics of Atget's photography include a wispy, drawn-out sense of light due to his long exposures, a fairly wide view that suggested space and ambiance more than surface detail, and an intentionally limited range of scenes avoiding the bustling modern Paris that was often around the corner from the nostalgia-steeped nooks he preferred. The emptiness of most of his streets and the sometimes blurred figures in those with people are partly due to his already antiquated technique, including the extended exposure times he required. 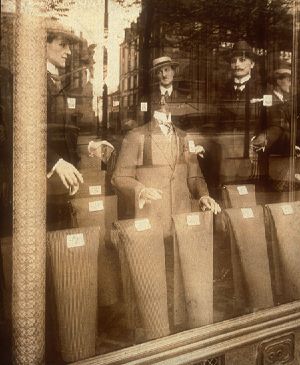 The mechanical vignetting often seen at some corners of his photographs is due to his having repositioned the lens relative to the plate on the camera (this is one of the features of bellows view cameras) as a way to correct perspective and control the image. Under the dark cloth, Atget surely knew the effect of these corners and accepted or preferred them. In fact, one of the key qualities of Atget's work, compared to the many other similar documentary workers of that city, is his savvy avoidance of perfection, that cold symmetry and clear stasis at which photography is so naturally good. He approaches his subjects with a humanism that is palpable once noticed, making the viewer an observer and appreciator with him in his meanderings. He has often said "I have done little justice to the Great City of Paris" as a comment on his career.

Paris was already a modern metropolis in Atget's day, but this was not the Paris he photographed. He usually worked early in the morning hours to avoid traffic and people, using that early morning light to capture an ethereal city. He showed Paris as a grand culture whose remains continued in the hotels, the courtyards, the streets and buildings, and the architecture of his day, all of which seem in his photographs to be remnants of a bygone day and era. There is something mythical about his pictures, with their soft light and soft edges. There are few people in his pictures, no modern industry, and no Eiffel Tower. Instead, he showed another Paris, a more delicate and refined one that lies beneath or under the modern, bustling metropolis. Many of the scenes he photographed still exist, but when re-photographed today—as has been done by Christopher Rauschenberg—they appear more hard-edged, more stark, more detailed, more harsh, and more depicting of mean streets, than in Atget's pictures.

Atget's photographs attracted the attention of well-known painters such as Man Ray, Andre Derain, Henri Matisse and Pablo Picasso in the 1920s. Fellow photographer Berenice Abbott is given much credit for the recognition that Atget's photographs received after Atget's death in France in 1927. Just before his death, Abbott, then an assistant to fellow expatriate Man Ray, photographed the aging Atget. When Atget died, Abbott partnered with the American Julien Levy to raise the money to acquire 1,500 of the negatives and 8,000 prints. She spent the next forty years promoting his work in America, elevating it to recognition as art, beyond its original reputation as documentation.

In 1968, the Museum of Modern Art purchased Abbott's collection of Atget's work. Abbott wrote of Atget: "He was an urbanist historian, a Balzac of the camera, from whose work we can weave a large tapestry of French civilization." In 1985 MoMA completed publication of a four-volume series of books based on its four successive exhibitions about Atget's life and work.

During his lifetime and for some years after that Atget's work was generally regarded as being documentary photography. Today, however, critics and scholars tend to regard Atget and his work as a beginning or a foreshadowing of surrealism. (See the account of Atget at the Victoria and Albert Museum in London for a presentation of Atget as a surrealist.)

Atget, a Retrospective was presented at the Bibliotheque Nationale in Paris in 2007.

Retrieved from https://www.newworldencyclopedia.org/p/index.php?title=Eugene_Atget&oldid=1006286
Categories:
Hidden category:
This page was last edited on 12 August 2017, at 15:12.
Content is available under Creative Commons Attribution/Share-Alike License; additional terms may apply. See Terms of Use for details.