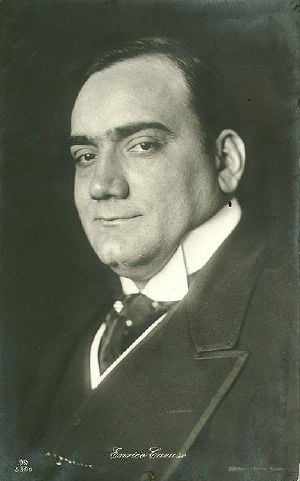 Enrico Caruso (February 25 1873 – August 2 1921) was an Italian opera singer of the verissmo style, and one of the most famous tenors in history. Caruso was also the most popular singer in any genre in the first 20 years of the twentieth century and one of the pioneers of recorded music. Caruso's popular recordings and his extraordinary voice, known for its range, power, and beauty, made him one of the best-known stars of his time. Caruso's particular talent was in his ability to communicate directly to the listener through his extraordinary vocal powers and charisma.

During his career, Caruso released over 260 recordings and made millions of dollars from the sale of his 78 rpm records. While he sang at many of the world's great opera houses including La Scala in Milan and Covent Garden in London, he is best known as the lead tenor at the Metropolitan Opera in New York City for 17 years.

Caruso had a repertoire of some 521 songs, ranging from classical to traditional Italian folk songs and popular songs of the day. The most often purchased songs by Caruso today are the Neapolitan sailor's song, "Santa Lucia," and the universally famous song, "'O Sole Mio." 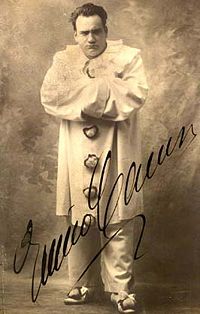 Enrico Caruso as Canio in Pagliacci, one of his signature roles.

Caruso was baptized in the Church of San Giovanni e Paolo on February 26, 1873, having been born in Naples, Italy, one day earlier. As a young man he held a daytime job as a mechanic and attended classes for choral singing in the evening.

He began his career in Naples in 1894. The first major role that he created was Loris in Giordano's Fedora, at the Teatro Lirico in Milan, on November 17, 1898. At that same theater, on November 6, 1902, he created the role of Maurizio in Cilea's Adriana Lecouvreur. Earlier that year, he had made his first recordings, an album on 78-rpm vinyl record which sold more than a million units and led to an invitation to appear at Covent Garden in the U.K.

In 1903, with the help of his agent, the banker Pasquale Simonelli, Caruso traveled to New York City, where he made his debut with the Metropolitan Opera on November 23, as the Duke of Mantua in a new production of Verdi's Rigoletto. The following year he began his lifelong association with the Victor Talking-Machine Company; his star relationships with both the Metropolitan and Victor would last until 1920.

In April 1906, Caruso and members of the Metropolitan Opera Company came to San Francisco to give a series of performances at the Tivoli Opera House. The night after Caruso's performance in Carmen, San Francisco was hit by a major earthquake, which led to a series of fires that eventually destroyed most of the city. The Metropolitan lost all of the sets and costumes it had brought to the city. Clutching an autographed photo of President Theodore Roosevelt, Caruso made an effort to get out of the city, first by boat and then by train, and vowed never to return to San Francisco.

On December 10, 1910, he starred at the Met as Dick Johnson in the world premiere of Puccini's La Fanciulla del West. For the next decade, he continued to record and perform mostly in New York, as the world's best known tenor and helping to pioneer the early success of the recording industry.

On December 11, 1920, during the performance of L'Elisir d'Amore by Donizetti he suffered a hemorrhagem causing the rest of the performance to be canceled. After that incident he gave only three more performances at the Met, his last one was as Eléazar in Halévy's La Juive on December 24, 1920.

Caruso died in 1921, in Naples, at age 48. The cause of his death was peritonitis, due to the bursting of an abscess. He is buried in Naples. 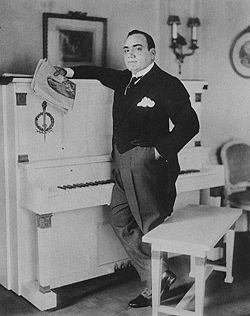 Caruso at his piano

Caruso's first recordings, made on April 11, 1902, in Milan, were done for the Gramophone and Typewriter Company, and they represent the genesis of what would become the modern classical recording industry. Having just performed the premiere of Alberto Franchetti's (1860-1942) opera Germania at La Scala, Caruso included two arias from that opera as well as arias by Verdi, Donizetti, Mascagni and Massenet in a ten-track album. The success of these recordings (with sales of one million units) led to his initial invitations to appear at Covent Garden in the UK and the Metropolitan Opera on New York City. British music journalist, Norman Lebrecht, commenting on Caruso's recordings, opined that the great tenor "possessed an exuberance whose infectiousness transcend sonic limitations and gave listeners the impression that here was a man full of life who enjoyed his work, whether he was singing tragedy or comedy."

Caruso began recording exclusively for the Victor Talking Machine Company in 1904. While most of his early recordings were made in typically cramped studios in New York and Camden, New Jersey, Victor began occasionally to record Caruso in the old Trinity Church in Camden, which could accommodate a larger orchestra. His final recordings were made in September 1920, and the last two selections were excerpts from the Rossini Petite Messe Solennelle. Caruso's conductors in his recordings included Walter B. Rogers and Joseph Pasternack.

RCA, which purchased the Victor Talking Machine Company in 1929, later took some of the old discs and over-dubbed them with a modern orchestra. Several previously unreleased Caruso discs continued to appear as late as 1973. In 1950, RCA reissued some of the fuller-sounding recordings on vinyl 78-rpm discs. Then, as LPs became popular, many of the recordings were electronically enhanced for release on LP. Researchers at the University of Utah utilized the first digital reprocessing techniques to reissue most of Caruso's Victor recordings, beginning in 1976. Complete sets of all of Caruso's recordings have been issued on CD by RCA, Pearl and Naxos, each using different mastering techniques. 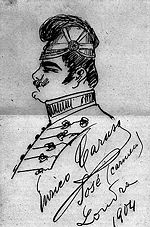 Caruso's sketch of himself as Don José in Carmen, 1904

Upon arriving in London for one of his first concert appearances there, the great tenor began to create drawings of himself in the style of caricatures. His love for drawing eventually came to be an important form of relaxation for him. Once, coming across one of his drawing that had made its way to an art dealer, he noticed the rather high price that the drawing was commanding and he said, "That's good pay for ten minutes work. Better we stop singing and start drawing."

He often used financial fortune in extremely generous ways. Caruso frequently gave his drawings away, knowing they could be of financial benefit to those possessed them and gave gifts of money to those who worked in the opera houses at which he appeared during the holiday season. He presented numerous charity concerts and helped raise millions of dollars for the Allied Forces during World War I.

Caruso had many affairs with women that resulted a several high-profile court cases. In 1918, he married Dorothy Park Benjamin, who was then aged 25, the daughter of an old-established New York family. They had one daughter, Gloria. Dorothy published a book about Caruso in 1945, which includes many of his letters to her.

Enrico Caruso gave the music world a star performer who lifted the artistry of opera singing into a commercial level which created a greater access for these dramatic musical performances. Caruso was one of the first vocalists to make numerous recordings. He and the disc phonograph did much to promote each other in the first two decades of the twentieth century. His 1907 recording of Vesti la giubba from Leoncavallo's Pagliacci was the world's first gramophone record to sell a million copies. Many of Caruso's recordings have remained in print since their original issue a century ago.

Caruso was portrayed by Mario Lanza in a highly fictionalized Hollywood motion picture, The Great Caruso, in 1951. In 1987, he was posthumously awarded the Grammy Lifetime Achievement Award. 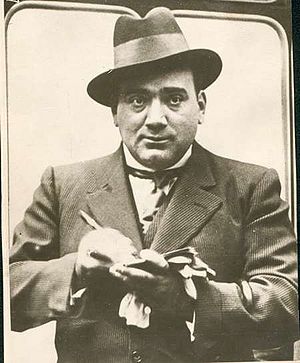 At the time of his death, the tenor was preparing the title role in Verdi's Otello. Though he never performed the role, he recorded two selections from the opera: Otello's aria, "Ora e per sempre addio," and his duet with Iago, "Sì, pel ciel marmoreo, giuro."

Retrieved from https://www.newworldencyclopedia.org/p/index.php?title=Enrico_Caruso&oldid=1006440
Categories:
Hidden category:
This page was last edited on 22 August 2017, at 21:33.
Content is available under Creative Commons Attribution/Share-Alike License; additional terms may apply. See Terms of Use for details.