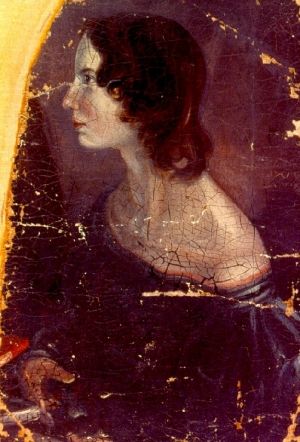 A portrait of Emily Brontë by her brother, Branwell Brontë

Emily Jane Brontë (July 30, 1818 – December 19, 1848) was a British novelist and poet, best remembered for her only novel Wuthering Heights, which is now an acknowledged classic of English literature, and is considered to be one of the pinnacles of fiction from the age of Romanticism. She was as much a Romantic character as any of those found in her novel; Brontë was silent and shy to the point of being a recluse. Virtually nothing is known of her life, and her sisters—who acknowledged her genius—fiercely protected her from the outside world.

Despite this relative isolation, Emily Brontë possessed a powerful understanding of the society in which she lived, and particularly the Romantic trends in literature and philosophy that had, during her lifetime, become immensely popular. Her one novel, over which she worked like a perfectionist relentlessly, is now considered to be the apotheosis of Romantic literature. It features all the archetypes of her times—unrequited passion; supernatural imagery; and intense melodrama—but raises them above the level of mere romance, crafting these elements together into a work of high art. Wuthering Heights is not only one of the greatest novels of European Romanticism, it also presages much of the narrative complexity and style, developments in fiction which were to come in the following century. With her keen eye for psychology and characterization, Emily Brontë is not just a great Romantic novelist, but one of the greatest novelists of the nineteenth century.

Emily was born at Thornton in Yorkshire to Patrick Brontë and Maria Branwell. She was the younger sister of Charlotte Brontë and the fifth of six children. In 1820, the family moved to Haworth, where Emily's father was perpetual curate, and it was in these surroundings that their literary talent flourished. In childhood, after the death of their mother, the three sisters and their brother Branwell created imaginary lands (Angria, Gondal, Gaaldine), featuring these in stories they wrote. Little of Emily's work from this period survives, except for poems spoken by characters (Ratchford 1941).

In 1838, Emily commenced work as a governess at Miss Patchett's Ladies Academy at Law Hill Hall, near Halifax. Later, with her sister Charlotte, she attended a private school in Brussels. The sisters later opened up a school at their home, but had no pupils.

It was the discovery of Emily's poetic talent by her family that led her and her sisters, Charlotte and Anne, to publish a joint collection of their poetry in 1846. To evade contemporary prejudice against female writers, the Brontë sisters adopted androgynous first names. All three retained the first letter of their first names: Charlotte became Currer Bell, Anne became Acton Bell, and Emily became Ellis Bell.

In 1847, she published her only novel, Wuthering Heights, as two parts of a three-part book (the last part being Agnes Grey). Its innovative structure somewhat puzzled critics. Although it received mixed reviews when it first came out, the book subsequently became an English literary classic. In 1850, Charlotte edited and published Wuthering Heights as a stand-alone novel and under Emily's real name.

Like her sisters, Emily's health had been weakened by their harsh life at home and at school. She died on December 19, 1848 of tuberculosis, having caught a chill during the funeral of her brother in September. She was interred in the Church of St. Michael and All Angels family vault, Haworth, West Yorkshire, England.

Wuthering Heights is Emily Brontë's only novel. It was first published in 1847 under the pseudonym Ellis Bell; a posthumous second edition was edited by her sister Charlotte. The name of the novel comes from the manor on which the story centers.

Though now taken to be a classic of English literature, Wuthering Heights’ initial reception was lukewarm at best. Its innovative structure, which has been likened to a series of Matryoshka dolls, puzzled critics when it first appeared. Some critics of the time even believed it to be an earlier, less mature work from Charlotte Brontë, who had published Jane Eyre that same year under the pseudonym Currer Bell. Subsequent critics revised this view, and most agreed that Wuthering Heights' originality and achievement exceeded those of her sisters.

Brontë's novel tells the tale of Catherine and Heathcliff, their all-encompassing love for one another, and how this unresolved passion eventually destroys them both. Social tensions prevent their union, leading Heathcliff to shun and abuse society. The story is given here in detail, as the book's plotting is at times non-linear. The story is narrated by a character named Lockwood, who is renting a house from Heathcliff. The house, Thrushcross Grange, is close to Wuthering Heights; yet, as in many modern novels that were to follow after Brontë, Lockwood's reliability as a narrator is questionable, and his relation to the various characters in the story is somewhat unusual.

Much of the action itself is narrated to Lockwood during his illness by the housekeeper of Thrushcross Grange, Nelly Dean. Lockwood's arrival is after much of the story has already happened, but his story is interwoven with Dean's.

The plot is complicated, involving many turns of fortune. It begins with Mr. Earnshaw, the original proprietor of Wuthering Heights, bringing back the dark-skinned foundling Heathcliff from Liverpool. Initially, Earnshaw's children—Hindley and Catherine—detest the boy, but over time Heathcliff wins Catherine's heart, which causes Hindley to resent him. Upon Earnshaw's death three years later, Hindley marries a woman named Frances and takes over Wuthering Heights, domineering Heathcliff, forcing to work in the fields. Despite this, Heathcliff and Catherine remain close friends. By means of an accident (a dog bite), Catherine is forced to stay at Thrushcross Grange for some weeks, wherein she grows attached to Edgar Linton.

A year later, Frances dies soon after the birth of Hindley's child, Hareton. The loss leaves Hindley despondent, and he turns to alcohol. Some two years after that, Catherine becomes engaged to Edgar, causing Heathcliff to leave.

After three years of marriage, Heathcliff returns having amassed significant wealth. He dupes Hindley into signing Wuthering Heights over to him; he marries Isabella Linton, Edgar's sister, and as a result is in a position to inherit Thrushcross Grange as well. His cruelty towards Isabella and Hareton knows no bounds.

Catherine herself dies in childbirth, giving birth to a girl—also named Catherine. Isabella flees a year after, giving birth to a boy, Linton. At around the same time, Hindley dies, and Heathcliff takes final control of Wuthering Heights. In perhaps the most complicated turn of the plot, fifteen or sixteen years later Heathcliff forces Catherine and Linton to marry. Edgar Linton, father of Catherine, dies, followed shortly by Linton. Heathcliff expects this to guarantee complete control of both Wuthering Heights and Thrushcross Grange.

It is at this point in the story, the winter of 1801, that Lockwood arrives. Dean tells him the past thirty or so years of the story during his illness. Lockwood is horrified and departs for London.

Catherine, at first repulsed by Hareton's roughness, eventually grows tender towards him—just as her mother grew tender towards Heathcliff. Only through the union of young Hareton and young Catherine can the pattern of hatred and darkness be broken and of course this can only come with Heathcliff's eventual demise at the end of the novel. The difference between young Hareton and young Catherine and Catherine and Heathcliff is that they are matched in social status and experience and therefore have more in common than just their love for one another. Furthermore, it is strongly implied that Heathcliff himself, on seeing their love for one another, no longer cares to pursue his life-long vendetta.

Heathcliff dies, and Catherine and Hareton marry. Heathcliff is buried with Catherine (the elder), and the story concludes with Lockwood visiting the grave, unsure of exactly what to feel.

A number of apparently supernatural incidents occur during the novel, although their true nature is always ambiguous. The mystery of Heathcliff's parentage is never solved, and at one point in the novel Nelly Dean entertains the notion that Heathcliff may be some hideous changeling. At the beginning of the novel, Lockwood has a horrible vision of Catherine (the Elder) as a child, appearing at the window of her old chamber at Wuthering Heights, begging to be allowed in; not only does Heathcliff, on hearing of this, lend it credence, but when he dies it is noted that the window of his room was left open, raising the possibility that Catherine returned at the moment of his death. After Heathcliff dies, Nelly Dean reports that various superstitious locals have claimed to see Catherine and Heathcliff roaming the moors, although in the closing line of the novel Lockwood discounts the idea of "unquiet slumbers for those sleepers in that quiet earth."

Wuthering Heights exhibits many of the characteristics of the gothic romances popular in Emily Brontë's time: a dark setting; a doomed passion; revenge and horror; and the presence (however vague) of menacing and supernatural forces. Yet the novel, as is obvious from even the briefest plot summary, is far more complicated than a simple ghost story in the vein of Anne Radcliffe. The very structure of the text places the reader in a bizarre position — we are told the story by a narrator who is having the story largely told to him — all of which brings to the foreground the narrative technique of the novel itself. With respect to these considerations, Brontë's novel is clearly unique not only when it is compared to the novels written by her sisters, but also to virtually all the other fiction produced in the first half of the nineteenth century. The structure of Wuthering Heights, which includes a story within a story within a story, and a narrative that crosses two generations of characters all viewed through the lens of a distant and largely uninvolved narrator—all of these techniques were baffling to Brontë's contemporaries, but have now become some of the most essential commonplaces for modern and postmodern fiction. By creating a story that draws explicit attention to its own fictiveness, Brontë produced a work that acts as a critique of fiction itself, and prefigured the sort of highly vexing and ambiguous literature that would be carried on by such luminaries as Joseph Conrad, Virginia Woolf and F. Scott Fitzgerald. Even Lockwood, by the novel's end, is unsure of what to make of the story he has just related to his audience, and that in many ways is the lesson of the novel as a whole.

Retrieved from https://www.newworldencyclopedia.org/p/index.php?title=Emily_Brontë&oldid=1006662
Categories:
Hidden category:
This page was last edited on 8 September 2017, at 16:31.
Content is available under Creative Commons Attribution/Share-Alike License; additional terms may apply. See Terms of Use for details.