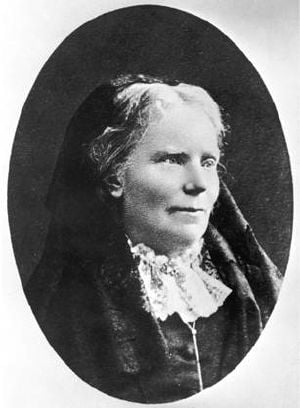 Elizabeth Blackwell (February 3, 1821 - May 31, 1910) was an abolitionist and a women's rights activist, and the first woman in the United States to practice medicine with a college degree. She supported medical education for women and helped many other women achieve their goals. She established the New York Infirmary in 1857, thereby offering practical solutions to one of the many problems facing women who were rejected from internships elsewhere. She published several important books on the issue of women in medicine. As a pioneer for women into a field dominated by men, she has become a role model for young women everywhere.

Blackwell was born in Bristol, England, the third of nine children born to Samuel Blackwell, a sugar refiner who insisted that his children, both sons and daughters, receive a good education. In 1831, the family emigrated to the United States, and set up a refinery in New York City. Unfortunately, Samuel Blackwell was not a very successful businessman and moved the family several times before his death in Cincinnati. After the death of her father, Blackwell, her mother, and her two sisters, having no financial resources started a private school. Desiring to apply herself to the practice of medicine, she took up residence in a physician's household, using her time there to study from the family's medical library.

Her father had been very concerned with social reform. His involvement with abolitionism led to a friendship with William Lloyd Garrison. Blackwell, following her father's lead, became active in the anti-slavery movement (as did her brother Henry Brown Blackwell, who married Lucy Stone), in the course of which she made friends with Harriet Beecher Stowe. Another brother, Samuel C. Blackwell, married another important figure in women's rights, Antoinette Brown.

Blackwell traveled to Kentucky, then to the Carolinas to teach school. She loved teaching but still longed to become a doctor. She read medical books secretly while teaching. She is quoted as saying, "The idea of winning a doctor's degree gradually assumed the aspect of a great moral struggle, and the moral fight possessed immense attraction for me." She soon began searching for a medical school that would accept a woman student.

Blackwell applied to several prominent medical schools but was rejected by all. Her second round of applications was sent to smaller colleges, including Geneva College in New York. She was accepted there anecdotally, because the faculty put it to a student vote, and the students thought her application a hoax. When it became apparent that she was serious, the entire school was appalled. Blackwell persevered even in spite of having no friends and being ostracized. At first, she was even kept from classroom medical demonstrations, as they were deemed inappropriate for a woman. She braved the prejudice to complete her training, ranking first in her class. On January 23, 1849, she became the first woman to earn a medical degree in the United States. Upon receiving her diploma from the President of the college, Blackwell said, "Sir, by the help of the Most High, it shall be the effort of my life to shed honor on this diploma."

Blackwell felt she needed further education, but was frustrated with the United States schools. She decided to study in England. She remained in England briefly and traveled to France to pursue training as a midwife at La Maternite. She had dreamed of one day becoming a surgeon. Sadly, that was not to happen, as Blackwell contracted purulent ophthalma from a baby she was treating in France that left her blind in one eye.

After regaining her health she returned to England where she met and befriended Florence Nightingale. She was allowed to work in England at St. Bartholomew's Hospital. Although the acknowledgment of the medical field was refreshing, she longed for New York. She arrived back in the United States in 1851. She was denied access to hospitals and infirmaries and eventually had to purchase a house in which practice medicine.

Blackwell and her sister Emily (also a doctor) opened a dispensary called the New York Infirmary for Women and Children in 1857. When the American Civil War began, she trained nurses, and in 1868 she founded a Women's Medical College at the Infirmary to formally train women, physicians, and doctors.

In 1869 she left her sister Emily in charge of the College and returned to England. There, with Florence Nightingale, she opened the Women's Medical College. Blackwell taught at the newly-created London School of Medicine for Women and became the first female physician and doctor in the UK Medical Register. She pioneered in preventive medicine and in the promotion of antisepsis and hygiene and was responsible for the first chair of hygiene in any medical college.

In 1875, Elizabeth Blackwell was appointed professor of gynecology at the London School of Medicine for Children, founded by Elizabeth Garrett Anderson. She remained there until 1907, when she retired after a serious fall down stairs. She died in 1910, at the age of 89 in Hastings, England. By the time she died female doctors were accepted in England and the United States. The Women’s Medical College had closed, as regular colleges were accepting female students. There were 7,000 female doctors in the States. 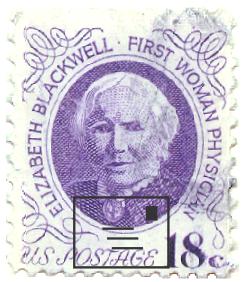 Blackwell was commemorated on a postage stamp.