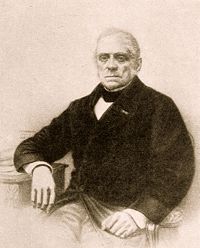 Daniel François Esprit Auber (January 29, 1782 – May 13, 1871) was a French composer who became an important contributor to the French opera comique. He was taught by Cherubini whom he later surpassed with the popularity of his operas; however, he never forgot his parents and his Normandy upbringing. Auber's success in creating opera comiques only cemented his sense of personal integrity and his pathway to making a meaningful contribution to the music and societal world.

The son of a Paris print-seller, Auber was born in Caen in Normandy.

Destined by his father for the print selling trade, he was allowed, nevertheless, to indulge his fondness for music, and at an early age learnt to play several instruments, his first teacher being the Tirolean composer, Josef Alois Ladurner (March 7, 1769 – February 20, 1851). Sent at the age of 20 to London to complete his business training, he was obliged to leave England as a result of the breach of the Treaty of Amiens (1804).

He had already attempted musical composition, and at this period produced several concertos pour basse, in the manner of the violoncellist Lamarre, in whose name they were published. The praise given to his concerto for the violin, which was played at the Paris Conservatoire by Mazas, encouraged him to undertake a resetting of the old comic opera, Julie (1811). Conscious by this time of the need for regular study, he placed himself under the severe training of Cherubini, by whom the special qualities of the young composer were successfully developed.

In 1813 the unfavorable reception of his one-act debut opera Le séjour militaire put an end for some years to his attempts as composer. But the failure in business and death of his father, in 1819, compelled him once more to turn to music, and to make that which had been his dream the serious employment of his life. He produced another opera, Le testament et les billets-doux (1819), which was no better received than the former. But he persevered, and the next year was rewarded by the complete success of La bergère châtelaine, an opera in three acts.

This was the first in a long series of brilliant successes. In 1822 began his long association with Augustin Eugène Scribe as librettist. The opera of Leicester, in which they first worked together (1823), is remarkable also as showing evidences of the influence of Rossini. But his own style was an individual one, marked by lightness, sparkling vivacity, grace and elegance, clear and piquant of melody—characteristically French. Le maçon (1825) was his first major triumph,staying in the repertory until the twentieth century, with 525 performances at the Opéra Comique alone.

Auber achieved another great musical triumph in La muette de Portici, once familiarly known as Masaniello after its hero. Produced at Paris in 1828, it rapidly became a European favorite, and its overture, arias and choruses were heard everywhere. The duet Amour sacré de la patrie was welcomed like a new Marseillaise; its performance at Brussels on August 25, 1830, in which Adolphe Nourrit sang the leading tenor role, engendered a riot that became the signal for the Belgian Revolution that drove out the Dutch.

Official and other dignities testified to the public appreciation of Auber's works. In 1829 he was elected a member of the Institute. The opera Fra Diavolo, which premiered on January 28, 1830, was destined to be his most successful opera, and never completely left the international repertory. That same year, 1830, he was named director of the court concerts. Next year, on June 20, 1831, he had another big success, with his Le philtre, starring the great tenor, Adolphe Nourrit. The libretto was soon translated into Italian, and set by Donizetti as L'elisir d'amore, one of the most successful comic operas of all time.

Two years later, on February 27, 1833, Gustave III, his second grand opera also triumphed, and stayed in the repertory for years. The libretto was to be used twice more, first by Saverio Mercadante for Il reggente, with the action transferred to Scotland and, next by Giuseppe Verdi, as Un ballo in maschera. He enjoyed several more succeses in the mid 1830s, late 1830s, and early 1840s, all at the Opéra Comique. These were Le cheval de bronze (1835), L'ambassadrice (1836), Le domino noir (1837), Les diamants de la couronne (1841) and La part du diable (1843).

In the meantime, in 1842, at the wish of Louis Philippe, he succeeded Cherubini as director of the Conservatoire. Auber was also a member of the Legion of Honor from 1825, and attained the rank of commander in 1847. That year also saw the premiere of Haydée, another opéra comique, even though it was on a serious subject. The tenor lead in Haydée was sung by the same Gustave Roger who, two years later, was to create the title role in Meyerbeer's Le prophète at the Opéra. Napoleon III made Auber his Imperial Maître de Chapelle in 1857.

In his later years, Auber's output slowed down considerably. The 1850s were marked by Manon Lescaut, an opéra comique with a tragic end (1856), and revisions of Le cheval de bronze and Fra Diavolo (both 1857). He did have one major success in the 1860s: Le Premier jour de bonheur (Opéra comique, 1868). His witty sayings, and his ever-ready kindness and beneficence won for him a secure place in the respect and love of his fellow-citizens. He remained in his old home during the German siege of Paris, 1870-71, but the miseries of the Paris Commune which followed sickened his heart, and he died in Paris on the 13th of May, 1871.

Today, the Rue Auber leads up to the Paris Opera House and the nearest RER station is Auber, named after him. (See Adolph Kohut: "Auber," vol. xvii. of Musiker Biographien Leipzig, 1895.)