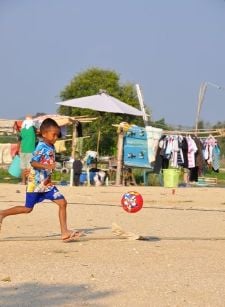 Child welfare is a term used to describe a set of government services designed to protect children and encourage family stability. These typically include investigation of alleged child abuse and neglect ("child protective services"), foster care, adoption services, and services aimed at supporting at-risk families so they can remain intact ("prevention services" or "family preservation services").

The idea behind child welfare programs is that, in certain circumstances, the interests of the child could be better served by removing children from the care of their parents and placing them into state custody. While a preferred scenario is to support the family while keeping it intact, the circumstances that are detrimental to the child may be too severe. Under these conditions, children are removed on a temporary basis while the parents, and possibly remaining siblings, receive supportive services until the family is deemed in a position to resume care of the child.

Although removal of a child may be deemed better than remaining in a situation of danger, either in the form of neglect or abuse, there are also serious consequences to such actions. Children naturally form strong attachment bonds to their parents, even when abused, and breaking these bonds is psychologically traumatic. Thus, the decision to remove a child cannot be taken lightly. Fundamentally, however, a child whose situation is so bad that it warrants breaking up the family for the sake of the child's welfare has already seriously damaged the child. To grow up healthy, children need more than external things such as shelter, food, and the material necessities of life and the absence of abuse. Children also require the loving care of parents to nurture their emotional and psychological development. Unfortunately, such support cannot be imposed by any government program, and so many children lack the love and security that they need to grow up to be healthy adults.

Most children who come to the attention of child welfare social workers do so because of any of the following situations, which are often collectively termed child maltreatment or child abuse:

Child welfare policies and initiatives target the health and well-being of children. They aim to protect children from the harmful effects of poverty, family and parenting problems, child abuse and neglect, and inadequate resources.

The concept of a state sanctioned child welfare system dates back to Plato's Republic. Plato theorized that the interests of the child could be served by removing children from the care of their parents and placing them into state custody. To prevent an uprising from dispossessed parents:

We shall have to invent some ingenious kind of lots which the less worthy may draw on each occasion of our bringing them together, and then they will accuse their own ill-luck and not the rulers.[1]

Poor laws were passed in the 1500s in Elizabethan England to help provide relief to the poor. These laws were aimed at providing work to those fit for it and to provide care for those who could not work. This could be seen as one of the first instances of child welfare as apprenticeships were established for impoverished children under these laws as well. Also established in England were workhouses in which the poor were supported and housed by the local municipality.

In 1655, in what is now the United States, there were criminal court cases involving child abuse.[2] In 1692, states and municipalities identified care for abused and neglected children as the responsibility of local government and private institutions. In 1696, England first used the legal principle of parens patriae, which gave the royal crown care of "charities, infants, idiots, and lunatics returned to the chancery." This principal of parens patriae has been identified as the statutory basis for U.S. governmental intervention in families' child rearing practices.[2]

In 1825, states enacted laws giving social-welfare agencies the right to remove neglected children from their parents and from the streets. These children were placed in almshouses, in orphanages, and with other families. In 1835, the Humane Society founded the National Federation of Child Rescue agencies to investigate child maltreatment. In the late 1800s, private child protection agencies—modeled after existing animal protection organizations—developed to investigate reports of child maltreatment, present cases in court, and advocate for child welfare legislation.[2] [3]

In 1912, the federal Children's Bureau was established to manage federal child welfare efforts, including services related to child maltreatment. In 1958, amendments to the Social Security Act mandated that states fund child protection efforts.[4] In 1962, professional and media interest in child maltreatment was sparked by the publication of C. Henry Kempe and associates' "The battered child syndrome" in Journal of the American Medical Association. By the mid-1960s, in response to public concern that resulted from this article, 49 U.S. states passed child-abuse reporting laws.[2][3] In 1974, these efforts by the states culminated in the passage of the federal "Child Abuse Prevention and Treatment Act" (P.L. 93-247) providing federal funding for wide-ranging federal and state child-maltreatment research and services.[2][3]

Declaration of the Rights of the Child

The Declaration of the Rights of the Child was drafted by Eglantyne Jebb and adopted by the International Save the Children Union, Geneva, February 23, 1923, and endorsed by the League of Nations General Assembly on November 26, 1924. It states that:

By the present declaration of the Rights of the Child, commonly known as the Declaration of Geneva, men and women of all nations, recognizing that mankind owes to the Child the best that it has to give, declare and accept it as their duty that beyond and above all considerations of race, nationality or creed:

Convention on the Rights of the Child

The United Nations "Convention on the Rights of the Child" is a convention establishing the political, economic, and cultural rights of children around the world, which came into effect in 1990. Most members of the United Nations have signed the convention partially or completely. Signing the convention requires that countries collect statistics on basic aspects of child welfare for report to the UN. The convention defines children as any person under the age of eighteen. Some of the rights specifically defined include: access to health care and education, developing their personality, growing up in a happy environment, and information of their rights.[6]

Child Protective Services (CPS) is the name of the governmental agency in the United States that responds to child abuse and neglect. These agencies often run orphanages, coordinate foster care and adoption services.

Child maltreatment that merits action by CPS is generally indicated by the presence of any of the following:

CPS agencies generally perform a series of functions that can be identified as follows:

Activities: States must articulate how a CPS agency is to respond to alleged maltreatment including:

Effects of early maltreatment on children in child welfare

Children with histories of maltreatment, such as physical and psychological neglect, physical abuse, and sexual abuse,[9] are at risk of developing severe psychiatric problems.[10] These children are likely to develop reactive attachment disorder (RAD).[11] These children may be described as experiencing trauma-attachment problems. The trauma experienced is the result of abuse or neglect, inflicted by a primary caregiver, which disrupts the normal development of secure attachment. Such children are at risk of developing a disorganized attachment.[12][13] Disorganized attachment is associated with a number of developmental problems, including dissociative symptoms,[14] as well as depressive, anxiety, and acting-out symptoms.[15][16]

Attachment disorder refers to the failure to form normal attachments with caregivers during childhood. This can have adverse effects throughout the lifespan. Clinicians have identified several signs of attachment problems. Attachment problems can be resolved at older ages through appropriate therapeutic interventions.

In the United States, data suggests that a disproportionate number of minority children, particularly African American and Native American children, enter the foster care system.[17] Additionally, once they enter foster care, research suggests that they are likely to remain in care longer.[18] Earlier research had shown no difference in the rate of abuse and neglect among minority populations when compared to Caucasian children. However a more recent report indicates differences: Unlike previous NIS cycles, the NIS–4 found strong and pervasive race differences in the incidence of maltreatment. In nearly all cases, the rates of maltreatment for Black children were significantly higher than those for White and Hispanic children.[19]

The Juvenile Justice system has also been challenged by disproportionate negative contact of minority children.[20] Because of the overlap in these systems, it is likely that this phenomenon within multiple systems may be related.

Rates of child orphan-hood vary by country, although estimates have placed the number of orphaned children around the world at around 143 million. Many factors influence child orphan-hood, primarily economic status and culture. In China, there are some 15 million orphans, mostly girls. This disproportionately high number comes as the result of China's "one child" policy in which couples are penalized for having more than one child. Chinese society typically values male children higher because it is the traditional responsibility of a male child to care for his parents in their old age whereas female children traditionally care for their husband's parents. In Africa, AIDS has orphaned over 11 million children.[21]

The state of child welfare

Though the rights of children are given more attention today than ever before, as the above statistics indicate there is much progress that still needs to be made. The international community has taken useful first steps in passing agreements such as the "Declaration of the Rights of the Child" and "Convention on the Rights of the Child." These agreements, however, do too little to actually hold states accountable for the welfare of children. Still too many children suffer abuse, or homelessness, poverty, and illiteracy. In order to remedy these problems, international bodies like the UN must encourage the development of national organizations devoted to child welfare similar to the offices of child protective services in the United States. Beyond this minimal level of attention, nations must be willing to offer health care, education, housing, and food for their children. Implementing successful programs in all these spheres is no easy task, but it appears necessary to improve the well-being of children. Merely mandating services is unlikely to succeed—improving the welfare of children requires a concerted effort from parents, extended family, neighbors, community services, health professionals and educators, and the faith community, as well as all levels of government.

Retrieved from https://www.newworldencyclopedia.org/p/index.php?title=Child_welfare&oldid=1095454
Categories:
Hidden category:
This page was last edited on 13 January 2023, at 22:34.
Content is available under Creative Commons Attribution/Share-Alike License; additional terms may apply. See Terms of Use for details.