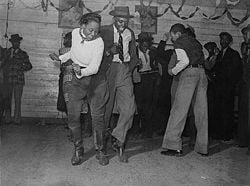 The cha-cha-cha (in Spanish cha-cha-chá) is a style of dance music.

In 1951, Cuban composer and violinist Enrique Jorrín introduced the cha-cha-chá to Cuban dance floors while playing with Orquesta América.

According to Jorrín, the sound made by the shoes of the dancers on the floor sounded like "cha-cha-cha," while they tried to follow the new rhythm that, at the beginning, was simply called "mambo-rumba." In 1953, his La Engañadora and Silver Star became recorded hits. In early days, this dance and its music were both known as "triple mambo" or "mambo with guiro rhythm."

The Cha cha is danced over two measures of 4/4. Dancers usually use a measure of 8 counts across two bars to describe the basic step. Count 1 is a step in place, leader's left foot, follower's right. Count 2 the leader makes a break step backward on the right foot, follower steps forward on the left. Count 3 the leader steps in-place on the left, follower on the right. On "4-and-5" the leader makes two quick steps and steps in place: right-left-right. On 6 the leader breaks forward on the left, on 7 steps in place on the right, and on 8-and-1 the small "cha cha" steps return to the start of the cycle. As a matter of etiquette, many leaders start on 6 to avoid the first step stepping away from the partner, symbolizing rejection.

The Cha-Cha-Cha falls on 4-and-5 and on 8-and-1. Because this does not gel with the conventional ways of subdividing rhythms, i.e. it spans the end of one bar and the beginning of the next, some schools call it "Cha cha" enabling the teacher to call out "1 2 3 cha-cha 5 6 7 cha-cha"

The Cha-Cha part of the rhythm is a small gliding step.

The forward step of the cha-cha is: instead of the male stepping forward on his right foot he puts his left foot to his right while the female does the same but she puts her right foot to her left, then they both step back in and do the three steps on the spot. This can be repeated as many times as you want rotating sides.

The backward step of the cha-cha is very similar to the forward step but instead of using you’re inside foot and stepping forward you use your outside foot and step backwards. The cha-cha turn is: the leader does a basic cha-cha step but when he does the three cha-cha’s on the spot he does them while moving to the side then he does it again moving back to his original position. While he does this the female does a normal step but instead of the three cha-cha-cha’s she does two quick turns whichever way the male is going then she does it again to end up back in her original position.

The tempo of the cha-cha is 128 beats per minute.

It is danced to medium tempo Latin music.

The cha-cha was created in Cuba by a Cuban violinist called Enrique Jorrin in 1954.

When dancing the cha-cha very small steps are needed because of its rhythm. The cha-cha part of the rhythm is a series of small gliding steps that barely touch the floor. A huge variety of fancy footwork can be added to the dance. Weight has to be moved carefully to make motions look gliding. The cha-cha includes a lot of hip motion. The pelvis is held in one position and left free for this motion. Even though the cha-cha uses smaller steps, dancers in competitions usually make their movement slightly longer to travel across the floor. The Cha-cha became hugely popular in the United States as did the mambo in the 1950s. Dancers began inventing new steps and turns to win competitions.

Cha cha is one of the five dances standardized for international competitions. The basis of the modern dance was laid down in the 1960s by Walter Laird and other top competitors of the time. The basic pattern involves a forward step with the left foot retaining part weight on the right foot, the knee of the right leg being allowed to flex and close to the back of the left knee, the left leg having straightened just prior to receiving part weight. This step is taken on the second beat of the bar. Weight is returned to the right leg on the second step (beat three.) The fourth beat is split in two so the count of the next three steps is 4-and-1. These three steps constitute the Cha-cha chasse. A step to the side is taken with the left foot, the right foot is half closed to the left foot (typically leaving both feet under the hips or perhaps closed together), and finally there is a last step to the left with the left foot. Both knees are allowed to be flexed on the count of `and' as otherwise an increase in height would take place as the feet are brought towards each other. Cha cha is danced without any rise and fall. The length of the steps in the chasse depends very much on the effect the dancer is attempting to make. In general Cha cha steps should be kept compact. While one partner dances the bar just described the other partner dances as follows. A step is taken back on the right foot, the knee being straightened as full weight is taken. The other leg is allowed to remain straight. It is possible it will flex slightly but no deliberate flexing of the free leg is attempted. This is quite different from technique associated with salsa, for instance. On the next beat (beat three) weight is returned to the left leg. Then a Cha cha chasse is danced RLR. Each partner is now in a position to dance the bar their partner just danced. Hence the fundamental construction of Cha cha extends over two bars, as does the underlying clave. Because of the action used during the forward step (the one taking only part weight) this basic construction inevitably turns left somewhat. The dancers do not dance in a slot; instead their alignment in the room gradually changes throughout the dance. Hip actions are allowed to occur at the end of every step. For steps taking a single beat the first half of the beat constitutes the foot movement and the second half is taken up by the hip movement.

Retrieved from https://www.newworldencyclopedia.org/p/index.php?title=Cha_cha_cha&oldid=678673
Categories:
Hidden category:
This page was last edited on 2 April 2008, at 04:21.
Content is available under Creative Commons Attribution/Share-Alike License; additional terms may apply. See Terms of Use for details.