Bryozoa, also known as Ectoprocta, is a major invertebrate phylum, whose members, the bryozoans, are tiny, aquatic, and mostly sessile and colonial animals. Also known as moss animals or sea mats, the colonial species of bryozoans generally build collective stony skeletons of calcium carbonate that are superficially similar to coral.

Bryozoa and Ectoprocta are generally considered synonymous, but historically Ectoprocta was considered one of two subgroups within Bryozoa, the other being Entoprocta, which most systematics now separate into its own phylum.

Bryozoans have a distinctive feeding organ called a lophophore found only in two other animal phyla, Phoronida (phoronid worms) and Brachiopoda (lamp shells). Characterized by some as a "crown" of ciliated tentacles, the lophophore is essentially a tentacle-bearing ribbon or string that is an extension (either horseshoe-shaped or circular) surrounding the mouth.

Tiny as individuals, but clearly visible and significant in their large colonies, bryozoans play an important role in sediment stabilization and binding, as well as key roles in food chains, consuming microorganisms and in turn being prey for fish and other animals. Their bi-level functionality is apparent in the food chain where their harvesting of phytoplankton as a source of nutrition for their own maintenance, growth, and multiplication makes the nutrients from the phytoplankton available also to those fish and other animals that prey on the bryozoans. Additionally, while building their colonial structures in which they thrive, the byozoans serve the larger ecosystem by stabilizing sediments.

Bryozoans are found in marine, freshwater, and brackish environments. They generally prefer warm, tropical waters but are known to occur worldwide. There are about 5,000 living species, with several times that number of fossil forms known. Fossils are known from the early Ordovician period about 500 million years ago (mya).

Although most species of Bryozoa live in marine environments, about 50 species inhabit freshwater. Some marine colonies have been found at 8,200 meters (26,900 feet)below the surface, but most bryozoans inhabit shallower water (Waggoner and Collins 1999). Several bryozoan species occur in the Midwestern United States, especially in the states of Ohio, Indiana, and Kentucky, which used to be a part of a large ocean.

Bryozoans attach to a variety of solid substrates, including rocks, shells, wood, sand grains, and blades of kelp, although some colonies form on sediment (Waggoner and Collins 1999). Bryozoan colonies also encrust pipes and ships, becoming a nuisance. Freshwater bryozoans may attach to tree roots and aquatic plants.

Extant (living) bryozoans are typically immobile, sessile, and colonial. However, there are bryozoan colonies that can move somewhat. And not all extant bryozoans are colonial and sessile. Waggoner and Collins (1999), basing their work on Buchsbaum et al. (1985), claim that there are a "few species of non-colonial bryozoans" that move about and live in the spaces between sand grains, and one species floats in the Southern Ocean (Antarctic Ocean). However, Ramel (2005) states that "all but one species are colonial," with the "single known solitary species, called Monobryozoon ambulans," having been discovered in 1934, by A. Remone—an occurrence that "was quite a surprise for the scientific community which until then had known all Bryozoans as colonial." Inconsistency among biologists on whether entoprocts are included in bryozoa may be responsible for the discrepancy.

Nonetheless, whether there are one or a few exceptions, bryozoans are characteristically colony-forming animals. Many millions of individuals can form one colony. The colonies range from millimeters to meters in size, but the individuals that make up the colonies are tiny, usually less than a millimeter long. In each colony, different individuals assume different functions. Some individuals (the autozooids) gather up the food for the colony, while others (the heterozooids) depend on them for food and contribute to the colony in other ways. Some individuals (the kenozooids) are devoted to strengthening the colony and still others (the vibracula) to cleaning the colony.

Bryozoans are suspension feeders, preying on phytoplankton, including diatoms and unicellular algae and being preyed upon by fish and sea urchins (Waggoner and Collins, 1999). Nudibranches (a type of colorful "sea slug") and sea spiders also eat bryozoans. Bryozoan "skeletons" are a collective production growing in a variety of shapes and patterns: Mound-shaped, lacy fans, branching twigs, and even corkscrew-shaped. Their "skeletons" have numerous tiny openings, each of which is the home of a minute animal called a zooid.

Each bryozoan zooid has a coelomate body (having a true body cavity) with a looped alimentary canal or gut, opening at the mouth and terminating at the anus.

Bryozoans feed with a specialized structure called a lophophore, which looks like a "crown" of tentacles and has been more precisely characterized as essentially a tentacle-bearing ribbon or string in the shape of a horseshoe or closed ring surrounding the mouth (Smithsonian 2007; Luria et al. 1981). Bryozoans have no defined respiratory or circulatory systems due to their small size. They do, however, have a hydrostatic skeletal system and a simple nervous system.

The tentacles of the bryozoans are ciliated, and the beating of the cilia creates a powerful current of water that drives water, together with entrained food particles (mainly phytoplankton), toward the mouth. The digestive system has a U-shaped gut, and comprises a pharynx, which passes into the esophagus, followed by the stomach. The stomach has three parts: the cardia, the caecum, and the pylorus. The pylorus leads to an intestine and a short rectum terminating at the anus, which opens outside the lophophore. In some groups among the bryozoa, notably some members of the bryozoan order ctenostome, a specialized gizzard may be formed from the proximal part of the cardia.

The gut and lophophore, which comprise most of the organs and tissues of an individual zooid, are also the principal components of what is called the "polypide." Cyclical degeneration and regeneration of the polypide is characteristic of marine bryozoans. After the final cycle of polypide degeneration and regeneration, the skeletal aperture of the feeding zooid may become sealed by the secretion of a terminal diaphragm. In many bryozoan colonies, only the zooids within a few generations of the growing edge are in an actively feeding state; older, more proximal zooids (for example, in the interiors of bushy colonies) are usually dormant. 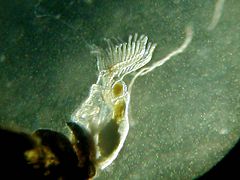 Because of their small size, bryozoans have no need for a blood system. Gaseous exchange occurs across the entire surface of the body, but particularly through the tentacles of the lophophore.

Bryozoans can reproduce both sexually and asexually. All freshwater bryozoans, as far as is known, are hermaphroditic (meaning they are both male and female), and most marine bryozoans as well (Smithsonian 2007). They may produce sperm and eggs at the same time (simultanenous hermaphrodites), or the male sexual organs may mature before the female organs (protandric hermaphrodites).

Asexual reproduction occurs by budding off new zooids as the colony grows, and is the main way by which a colony expands in size. If a piece of a bryozoan colony breaks off, the piece can continue to grow and will form a new colony. A colony formed in this way is composed entirely of clones (genetically identical individuals) of the first animal, which is called the ancestrula.

One species of bryozoan, Bugula neritina, is of current interest as a source of cytotoxic chemicals, bryostatins, under clinical investigation as anti-cancer agents. 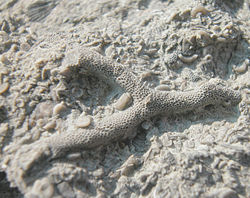 Fossil bryozoans are found in rocks beginning in the early Ordovician period. They were often major components of Ordovician seabed communities and, like modern-day bryozoans, played an important role in sediment stabilization and binding, as well as providing sources of food for other benthic organisms. During the early Carboniferous period, more specifically during the Mississippian epoch 354 to 323 mya, bryozoans were so common that their broken skeletons form entire limestone beds.

The bryozoan fossil record comprises more than 1,000 described species. It is plausible that the Bryozoa existed in the Cambrian but were soft-bodied or not preserved for some other reason; perhaps they evolved from a phoronid-like ancestor at about that time.

Most fossil bryozoans have mineralized skeletons with the skeletons of individual zooids varying from tubular to box-shaped and containing a terminal aperture from which the lophophore would have protruded to feed. Skeletal evidence of the Ordovician bryozoans suggests that the epithelia of zooids were continuous from one zooid to the next.

With regard to the bryozoan groups lacking mineralized skeletons, the statoblasts (encapsulated, asexually-produced buds) of freshwater forms have been recorded as far back as the Permian (288-251 mya), and fossils of the ctenostome order date only from the Triassic (251-200 mya).

One of the most important events during bryozoan evolution was the acquisition of a calcareous skeleton and the related change in the mechanism of tentacle protrusion. The rigidity of the outer body walls allowed a greater degree of zooid contiguity and the development of massive, multiserial colonies.

The Bryozoans were formerly considered to contain two subgroups: the Ectoprocta and the Entoprocta, based on the similar bodyplans and mode of life of these two groups. (Some researchers also included the Cycliophora, which are thought to be closely related to the Entoprocta.) However, the Ectoprocta are coelomate (possessing a body cavity) and their embryos undergo radial cleavage, while the Entoprocta are acoelemate and undergo spiral cleavage. Molecular studies are ambiguous about the exact position of the Entoprocta, but do not support a close relationship with the Ectoprocta. For these reasons, the Entoprocta are now considered a phylum of their own (Valentine 2004). The removal of the 150 species of Entoprocta leaves Bryozoa synonymous with Ectoprocta; some authors have adopted the latter name for the group, but the majority continue to use the former. There remain also some biologists who still consider Ectoprocta and Entoprocta as subgroups within the larger grouping Bryozoa, whether or not they are accorded status as a sub-phylum or a phylum.