In February 1926, Carter G. Woodson launched the celebration of "Negro History Week," the precursor of Black History Month. His dream was that the contributions of Black Americans as an integral part of American history would be recognized by all. Woodson hoped that in the future Negro History Week would be unnecessary, a sentiment shared by many about Black History Month today. Unfortunately, that day has not yet arrived, and the contributions of Black Americans in particular continue to be separately recognized and celebrated, one month out of the year. 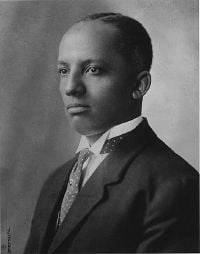 The precursor to Black History Month was created in 1926 in the United States, when historian Carter G. Woodson and the Association for the Study of Negro Life and History announced the second week of February to be "Negro History Week."[1] This week was chosen because it coincided with the birthday of Abraham Lincoln on February 12 and of Frederick Douglass on February 14, both of which dates black communities had celebrated together since the late nineteenth century.[1] Negro History Week was the center of the equation. The thought-process behind the week was never recorded, but scholars acknowledge two reasons for its birth: recognition and importance.[2] Woodson felt deeply that at least one week would allow for the general movement to become something annually celebrated. Also, after the ten year long haul to successfully complete his Journal of Negro History, he realized the subject deserved to resonate with a greater audience.

From the event's initial phase, primary emphasis was placed on encouraging the coordinated teaching of the history of black Americans in the nation's public schools. The first Negro History Week was met with a lukewarm response, gaining the cooperation of the Departments of Education of the states of North Carolina, Delaware, and West Virginia as well as the city school administrations of Baltimore and Washington, D.C..[3] Despite this far from universal observance, the event was regarded by Woodson as "one of the most fortunate steps ever taken by the Association," and plans for a repeat of the event on an annual basis continued apace.[3]

At the time of Negro History Week's launch, Woodson contended that the teaching of black history was essential to ensure the physical and intellectual survival of the race within broader society:

If a race has no history, it has no worthwhile tradition, it becomes a negligible factor in the thought of the world, and it stands in danger of being exterminated. The American Indian left no continuous record. He did not appreciate the value of tradition; and where is he today? The Hebrew keenly appreciated the value of tradition, as is attested by the Bible itself. In spite of worldwide persecution, therefore, he is a great factor in our civilization.[3]

By 1929, The Journal of Negro History was able to note that with only two exceptions, officials with the State Departments of Educations of "every state with considerable Negro population" had made the event known to that state's teachers and distributed official literature associated with the event."[4] Churches also played a significant role in the distribution of literature in association with Negro History Week during this initial interval, with the mainstream and black press aiding in the publicity effort.[4]

Throughout the 1930s, Negro History Week countered the growing myth of the South’s "lost cause", as epitomized in both the novel and the movie Gone With The Wind. That myth argued that slaves had been well-treated, that the Civil War was a war of "northern aggression," and that blacks had been better off under slavery. "When you control a man's thinking you do not have to worry about his actions," Woodson wrote in his book The Mis-Education of the Negro, published in 1933. "You do not have to tell him not to stand here or go yonder. He will find his 'proper place' and will stay in it."[5]

Negro History Week grew in popularity throughout the following decades, with mayors across the United States endorsing it as a holiday.[1]

It is notable, however, that Woodson did not consider the teaching of Negro history to be limited to one week each year:

Woodson never confined Negro History to a week. His life’s work and the mission of ASALH since its founding in 1915 represent a living testimony to the year-round and year-after-year study of African American history.[6] 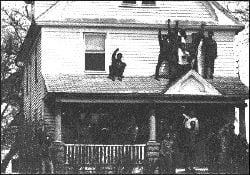 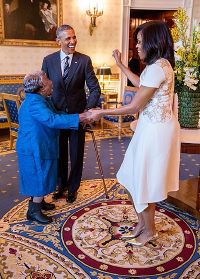 Six years later, in 1976, Black History Month was celebrated all across the country in educational institutions, centers of Black culture and community centers, both great and small, when President Gerald Ford recognized Black History Month during the celebration of the United States Bicentennial. He urged Americans to "seize the opportunity to honor the too-often neglected accomplishments of Black Americans in every area of endeavor throughout our history."[8]

In the black community, Black History Month was met with enthusiastic response; it prompted the creation of Black history clubs, an increase in interest among teachers, and interest from progressive whites.[1] Since its inception, Black History Month has expanded beyond its initial acceptance in educational establishments.

On February 21, 2016, 106-year Washington D.C. resident and school volunteer Virginia McLaurin visited the White House as part of Black History Month. When asked by the president why she was there, McLaurin said, "A Black president. A Black wife. And I’m here to celebrate Black history. That's what I'm here for."[9]

During the 2017 Black History Month, a month-long Black Lives Matter art exhibition was organized by three Richmond, Virginia artists at the First Unitarian Universalist Church of Richmond in the Byrd Park area of the city. The show featured more than 30 diverse multicultural artists on a theme exploring racial equality and justice.[10]

In 2018, Instagram created its first-ever Black History Month program, featuring a series of first-time initiatives, including a #BlackGirlMagic partnership with Spotify and the launch of the #CelebrateBlackCreatives program. By 2020, Black History Month had become a focus beyond schools, with programs in a variety of cultural institutions including theaters, libraries, and museums: "February is Black History Month, a time when the culture and contributions of African Americans take center stage at many of the nation's arts institutions."[11]

It has also garnered attention from the U.S. business community.[12] In February 2020, "much of corporate America is commemorating" Black History Month including The Coca-Cola Company, Google, Target Corporation, Macy's, United Parcel Service, and Under Armour.[13]

Unfortunately, Black History Month has come to be used, especially by movements such as Black Lives Matter, as an opportunity to draw attention to the struggle of black people in a predominantly white society. This brings the focus onto racism and division, rather than celebration and recognition of the achievements of black Americans. The contemporary identity politics approach with their negative and combative attitudes, in contrast to the Civil Rights Movement's leaders who were "consciously appealing to what we share," has been criticized as "a textbook example in how to not build solidarity."[14]

Black History Month is celebrated in February in Canada,[15] while in the United Kingdom[16] and Ireland[17] it is observed in October.

In the United Kingdom, Black History Month was first celebrated in October 1987.[18]

1987 was the 150th anniversary of Caribbean emancipation, the centenary of the birth of Marcus Garvey, and the 25th anniversary of the Organization of African Unity, an institution dedicated to advancing the progress of African states. It was declared African Jubilee Year, and UK authorities were called to recognize the contributions of Africans to the economic, cultural, and political life of the UK and ensure that Black children would enjoy positive images of themselves. This African Jubilee Year declaration gave birth to Black History Month, organized through the leadership of Ghanaian analyst Akyaaba Addai-Sebo. It was celebrated in October because it was the traditional harvest period and time when African leaders gathered to settle differences and appraise the state of the community, as well as being after the UK summer vacation.[19] Black History Month provides the opportunity to share, celebrate, and understand the contribution and achievements of those with African or Caribbean heritage in the UK.[18]

Black History Month is about celebrating resilience, innovation, and determination to work towards a more inclusive and diverse Canada—a Canada in which everyone has every opportunity to flourish. Canadians celebrate the many achievements and contributions of Black Canadians and their communities who have done so much to make Canada the culturally diverse, compassionate, and prosperous nation it is today.[15]

Black History Month Ireland was initiated in Cork in 2010. This location seems particularly appropriate as, in the 19th century, the city was a leading center of abolition, and the male and female anti-slavery societies welcomed a number of black abolitionists to lecture there, including Charles Lenox Remond and Frederick Douglass.[20]

When first established, Black History Month resulted in some controversy, which has continued until the present day:

One concern was that contrary to the original inspiration for Black History Month, which was a desire to redress the manner in which American schools failed to represent Black historical figures as anything other than slaves or colonial subjects, Black History Month could reduce complex historical figures to overly simplified objects of "hero worship." Other critics refer to the celebration as a form of racism.[22]

Many have questioned whether it was appropriate for educational institutions to confine the study of Black history to one month, as opposed to integration of black history into the mainstream education the rest of the year. Whether Black History Month is seen as an educational enterprise or more of a cultural celebration of the contribution of black Americans to American history, limiting it to one month in the year can be problematic. In fact, Carter G. Woodson himself, referring to the original "Negro History Week" in an article he wrote for the Negro History Bulletin in 1938, noted:

Some teachers and their students have misunderstood the celebration of Negro History Week. They work up enthusiasm during these few days, stage a popular play, present an orator of the day, or render exercises of a literary order; but they forget the negro thereafter throughout the year. To proceed in such fashion may do as much harm as good.[23]

A number of prominent figures have spoken against the idea of one month dedicated to black history. Actor and director Morgan Freeman and actress Stacey Dash have criticized the concept of declaring only one month as Black History Month.[24] Freeman said, during a “60 Minutes” interview in 2005:

Indeed, Woodson, whose "Negro History Week" was the precursor and inspiration for Black History Month, hoped that in the future Negro History Week would be unnecessary. His dream was that the contributions of Black Americans as an integral part of American history would be recognized by all.[26]