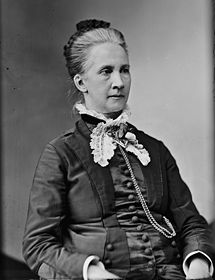 Until her death in 1917, she worked tirelessly on behalf of the Universal Peace Union and traveled extensively as their spokesperson. She was not only an advocate for women but for the rights of Native Americans and religious minorities.

However, for all of her accomplishments, she died only one step ahead of poverty. Her significance in the history of women's rights in America has recently been re-established through a biography written about her by Jill Norgren, titled, Belva Lockwood, the Woman Who Would be President. In defense of the disenfranchised whom she represented Lockwood stated simply, "Equality of rights and privileges is but simple justice."[1]

She was born Belva Ann Bennett in Royalton, New York, on October 24, 1820, the second daughter, and second of five children of farmers Lewis J. and Hannah Green Bennett. Her mother's family was said to be descendant from early Puritan dissidents, Roger Williams and Anne Hutchinson. Her father's ancestors were Scottish and became part of the bustling frontier economy of northern New York state by being involved in the construction of the Erie Canal, in 1825.

At the age of fourteen, her formal education ended when she became a rural schoolteacher boarding with the parents of her students. At the age of eighteen, she married farmer Uriah McNall, but his death three years later, after the birth of their only daughter, Lura, renewed Lockwood's determination to finish her education. Leaving her daughter in the care of her parents she went back to school to pursue a "ladies seminary degree." She later admitted that all of her friends and advisers objected to this idea and that she "was compelled to use a good deal of strategy to prevent an open rupture."

Lockwood graduated with honors from Genesee Wesleyan Seminary, which eventually became part of Syracuse University in Lima, New York, in 1857. During her years at college, Lockwood converted to Methodism and became an advocate of temperance, abolition, and women's rights. For several years she taught school and advocated new methods for teaching girls, such as Catharine Beecher's exercise regimen.

Lockwood, frustrated with her attempts at educational reform and intrigued by the possibilities of politics, decided to move with her daughter, Lura, to Washington, D.C., to begin a new life.

At the end of the Civil War, when politicians were heatedly debating the voting rights of freedmen, Lockwood, along with other women leaders of the era, such as Elizabeth Cady Stanton and Josephine Griffing, took up the banner of universal suffrage which would guarantee voting rights for all Americans that were not contingent upon race or sex. Lockwood's real interest in women's rights, however, was to be based on employment discrimination and the "inequality that prevailed between the payment of men and women for identical work."

In 1868, she married Ezekial Lockwood, a dentist, lay minister, and claims agent. They had a daughter, Jessie, who died before her second birthday. In 1877, Ezekial, several years older than his wife, passed away while Luru remained her mother's assistant and political ally until her own untimely death in 1893, at the age of forty four.

In 1872, Lockwood earned her law degree from National University Law School (now the George Washington University Law School), who initially had refused to grant her the degree until she prevailed upon the help of then president Ulysses S. Grant in order to became one of the first female lawyers in the United States.

Still, she was not allowed to practice in the U.S. Court of Claims or the United States Supreme Court. The laws of coverture, which recognized a woman's rights as inherently tied to her husband's were often the basis of discrimination against women in terms of property rights and employment opportunity.

However, Lockwood continued to lobby the U. S. Congress, from 1874 to 1879, for an anti-discrimination bill that would expand the powers of female attorneys. In 1879, Congress passed a law allowing all qualified women attorneys to practice in any federal court. Lockwood was sworn in as the first woman member of the United States Supreme Court bar on March 3, 1879. Late in 1880, she became the first woman lawyer to argue a case before the U.S. Supreme Court. Ironically, although Belva Lockwood was able to practice law, like other American women until the passage of the 19th Amendment in 1920, she was not allowed to vote.

In 1884, Lockwood became the second woman (after Victoria Woodhull) to run for President of the United States. Additionally, she earned the distinction of actually being the first to appear on the election ballot and to engage in a full-fledged campaign as the candidate for the National Equal Rights Party. Marietta Stow, who along with Clara S. Foltz nominated Lockwood, ended up supporting her as her vice presidential running mate. Lockwood, although an outspoken campaigner, knew that she did not have a serious chance of winning the presidency and, in fact, received few votes. This was at least partly due to the fact that many states still did not allow women to vote.

In 1914, when she was eighty-four years old and asked whether a woman would one day be president she replied,

If a woman demonstrates that she is fitted to be president she will some day occupy the White House. It will be entirely on her own merits, however. No movement can place her there simply because she is a woman. It will come if she proves herself mentally fit for the position.

As a member of the Universal Peace Union she tirelessly stumped both on the public lecture circuit and through writing campaigns, supporting a "high Court of Arbitration" to which commercial and political differences between countries could be referred (Belva Lockwood p. 131). She lobbied for the UPU to receive the Nobel Peace prize and though disappointed that her group was overlooked, she never relinquished her fight for causes that she believed in.

Not only was she an advocate for women's causes, she played an important role as an attorney in the defense of Native Americans. She supported citizenship for Native Americans and the allotment of tribal lands. She lobbied Congress for a special act that would permit the Eastern Cherokee Indians to sue in the Court of Claims. Although the case was tied up in court for several years, ultimately they won compensation for the sale of lands both past and present.

She wrote to President Grover Cleveland on behalf of the Church of Jesus Christ of Latter Day Saints (Mormons) of Utah defending their constitutional right to the free exercise of their religion. She strongly objected to the Edmunds Act of 1882—which threatened the very existence of the church itself—while cautioning against troop deployment ignited by a public frenzy of anti-Mormon hysteria. Although Lockwood did not espouse the practice of polygamy, she respected the right of Mormons to exist as a church free from public persecution and government interference.

Unlike her contemporaries, Margaret Fuller or Elizabeth Cady Stanton, Lockwood was not born into a family of social standing or economic means. In that sense, she was entirely a self-made person of great ambition, resolve, and fortitude.

Lockwood often went on the lecture circuit to promote her ideas and said in defense of traditional marriage (Belva Lockwood, p. 150): "While marriage, like law, is an experiment… it is undoubtedly with all its imperfections, the best experiment for the conservation of society yet revealed or promulgated." Additionally, while aware of the inequity of property laws in regards to marriage she advised that girls had "no right to enter marriage until able to be self supporting, and that entered upon, its duties and responsibilities belong as much to her as to the man; so that should death or accident deprive her and her children of the assistance of her life partner, she may be able to take up the business that his hands have dropped."

Retrieved from https://www.newworldencyclopedia.org/p/index.php?title=Belva_Lockwood&oldid=1063202
Categories:
Hidden category:
This page was last edited on 20 January 2022, at 20:20.
Content is available under Creative Commons Attribution/Share-Alike License; additional terms may apply. See Terms of Use for details.