Battle of the Pyramids

The Battle of the Pyramids was a battle fought on July 21, 1798 between the French army in Egypt under Napoleon Bonaparte and local Mamluk forces. It was the first of many battles of the Egyptian expedition of 1798–1799. Throughout the campaign, Napoleon proved to be a visionary and gifted commander. It was in this battle that he introduced one of his significant contributions to tactics, the massive divisional square.

Although Napoleon remained in Egypt for less than three years, he left behind scholars and artists who later brought back many artifacts, much knowledge, and treasure to Europe. Ancient Egypt captured the European imagination. Egypt, too, developed a relationship with France and with French culture that irrevocably changed its cultural, social, and political life. Egypt would later adopt the Napoleonic Code. The invasion saw the birth of Egyptology as a field of study. 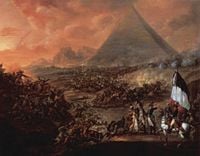 Napoleon's invasion of Egypt was almost certainly intended to be a stepping stone for further imperial expansion in the East, perhaps with the intent of equaling the achievements of Alexander the Great. Exactly why Napoleon invaded Egypt, however, has been subject to speculation with his own account suggesting that it was for the glory:

If, when we conclude peace with England, we give up the Cape of Good Hope, we should take Egypt ... [turning to address the navy] without you we could only carry the glory of the French name to a small port of the Continent; with you, we shall cross the seas and out national glory shall be witnessed by the most distant shores.[1]

When Napoleon left France for Egypt in July 1798, he did not only take his 38 soldiers but scholars, botanists, and cartographers. Although Napoleon did not succeed in colonizing Egypt, his scholars and short-lived administration there nonetheless profoundly changed the course of Egyptian history and also introduced Egypt to Europe, where Egyptology quickly became a popular subject. His team wrote a 22 volume work, the Descriptions de L'Egypte, and took the Rosetta Stone with its Greek and Egyptian script back to France. This would enable scholars to decipher Egyptian hieroglyphs. Egypt also turned to Europe. Some eminent Egyptians would study in or visit France, such as the reformer Muhammad Abduh (1849–1905) who lived there from 1884 to 1888, co-publishing a newspaper with Jamal-Ud-Din Afghani (1838–1897). In 1875, when Egypt adopted a modern legal system, it would base it on the Napoleonic Code. Many middle and upper class Egyptians still speak French as a second language.

The Battle of the Pyramids

In July of 1798, having landed in Egypt, Napoleon was marching from Alexandria toward Cairo having invaded and captured the former. He met two forces of the ruling Mamluks about nine miles from the Pyramids of Giza, and only four miles from Cairo. The Mamluk forces were commanded by Murad Bey and Ibrahim Bey and had a powerful and highly developed cavalry.

Napoleon realized that the only Egyptian troops of any worth on the battlefield were the cavalry. He had little cavalry of his own, his cavalry being outnumbered by a factor of two or three to one. He was therefore forced to go on the defensive, and organized his army into hollow "squares" with artillery, cavalry, and baggage at the center of each square. These "squares" were actually rectangles comprising a full brigade for the front and back lines and half a brigade forming each side. They could move or fight in any direction and so dispersed sustained charges of Mamluk cavalry with supporting artillery fire. He then stormed the Egyptian camp in the village of Embebeh, routing the disorganized Egyptian infantry and scattering their army.

The battle won Cairo and Lower Egypt for France. When news of the defeat of their legendary cavalry reached Cairo, the Mamluk army dispersed to Syria to reorganize there. The battle also signaled the final chapter of seven hundred years of Mamluk rule in Egypt. Despite this auspicious beginning, Admiral Lord Horatio Nelson's victory in the Battle of the Nile ten days later ended Bonaparte's hopes for a glorious conquest of the Middle East. Britain saw Egypt as vital to her own interests further east, and would not tolerate a French imperial presence there; that would damage English trade in the region and threaten their hold on India and safe passage to and from that colony.

The Fate of the French in Egypt

Napoleon, with a small contingent, sailed from Egypt August 23, 1799, following his first land defeat and left Jean Baptiste Kléber (1753–1800) behind to deal with the situation. Napoleon's team of intellectuals established the Institut de l'Egypte in Cairo, which housed 35 scholars divided into departments for industry, science and mathematics, health, art, and literature.

Kleber's immediate thought was to try to withdraw his troops. To facilitate this he negotiated a treaty with the British, but the senior British Admiral refused to honor the terms of the treaty that permitted an honorable withdrawal.

In this capacity, seeing no hope of bringing his army back to France or of consolidating his conquests, he negotiated the convention of El-Arish (January 24, 1800) with Admiral Smith, winning the right to an honorable evacuation of the French army. Kléber then had little choice but to engage the Egyptian forces, who were marching on his camp. The battle took place at Heliopolis on March 20, 1800. Despite the fact that the French were overwhelmingly outnumbered by ten thousand to sixty thousand men, they won the battle and thus also retook Cairo. Kléber did not survive long, as he was assassinated by a Syrian student on June 14, 1800.

His successor, General Menou, continued to command a segment of French occupied territory in Egypt. His troops suffered constant skirmish attacks by British and Turkish forces until March 1801 when the British army landed on the beaches at Aboukir in the Nile Delta, near Alexandria. With Ottoman Turkish allies, the British pushed the French back, conducted the surrender of General Belliard who was commanding the Cairo garrison, and besieged Alexandria where Menou, as Commander in Chief of the "Army of the East," surrendered the remaining forces formally at the end of August, 1801. The remaining French soldiers were sent back to France in British ships. A great deal of ancient Egyptian artifacts and treasure accompanied them, including the famous Rosetta Stone.

The face of Cairo changed as a result of the three years of French presence:

After the three years that he spent in Cairo, the city would never again be the same Oriental town that it had been. The French left a legacy that is written all over the European parts of Cairo. Their tastes were mainly of a French middle class influence.[2]

The real winners, said Rusensweig, were the scholars, who opened Europe's eyes to the splendor that was Egypt's heritage:

Astounded by the depth of Egypt's previously unknown splendours, they opened the eyes of France and the West to the mysteries of that country. So enchanted were the French by their role in the 'conquest' of Egypt, as Napoleon succeeded in convincing them, that for a century French art and culture would continue to glorify it." [3]

Egyptians may have caught a taste of freedom from awareness of the revolutionary, egalitarian spirit of France. However, Egypt also became a theater for European imperial ambition. Effectively, Egypt became a British possession from 1883 until 1956.[4] Napoleon had wanted to free Egypt from Ottoman rule and under the leadership of Muhammad Ali Pasha, the Egyptians effectively did achieve autonomy, if not full independence.