The Largs "Pencil" monument overlooks the islands of Cumbrae, with the Isle of Arran in the background.

The Battle of Largs was an military engagement fought between the armies of Norway and Scotland near the present-day town of Largs in North Ayrshire on the Firth of Clyde in Scotland on October 2, 1263. It was the most important military engagement of the Scottish-Norwegian War. The Norwegian forces were led by king Håkon Håkonsson and the Scottish forces by king Alexander III. The result was inconclusive, but in the long term favored the Scots. Effectively, Scotland was now free from Viking domination.

The type of iconic status that the Battle assumed in Scottish folk lore may rest on a somewhat shaky foundation. Nonetheless, it did mark a turning point in the development of the Scottish nation. In the context of Alexander III's reign, the Battle was part of a strategy by which he successfully secured Scottish autonomy. On the other hand, his merchants sold produce across Europe, so he did not isolate his small nation from the world beyond. This legacy informs a tendency for Scotland to see herself as a secure and stable base from which people can participate in a global community. When more people see themselves as members of an inter-dependent world, with common responsibilities for the welfare of all, humanity will shift from selfishly thinking about the interests of a few, to considering the needs of all.

The kingdom of Súðreyjar ("Southern Islands"), comprising the Inner and Outer Hebrides and Kintyre, and the kingdom of Man had been under the suzerainty of Norway since about 1100, its kings vassals of the king of Norway. Since the 1240s, the Scottish king Alexander II had been attempting to buy the islands from the Norwegian king Håkon Håkonsson, but he consistently refused. Alexander's successor Alexander III continued this policy, but again king Håkon refused. In the summer of 1262, Scottish forces under the earl of Ross launched raids against the Isle of Skye. News of this reached the Norwegian king together with reports that the Scottish king was planning to conquer all the islands. Håkon responded by equipping a large conscripted leidang-fleet. According to Icelandic annals the biggest fleet ever to leave Norway left Bergen for Scotland in July 1263. In the Hebrides, Håkon's fleet linked up with the forces of king Magnus III of Man and king Dougal of the Hebrides. Historians estimate that the size of his fleet after this was probably over 120 ships, with a force of between 12,000 and 20,000 men. After establishing control of the Hebrides, king Håkon anchored his fleet by the Isle of Arran in the Firth of Clyde, where he was approached by envoys from the Scottish king, opening peace talks. The talks dragged on without producing results, and in the end Håkon broke off the talks, and sent the kings Magnus and Dougal with 40 ships up Loch Long and into Loch Lomond with a part of the fleet to loot. The main body of the fleet moved closer to the mainland, between the islands of Cumbrae and Largs. 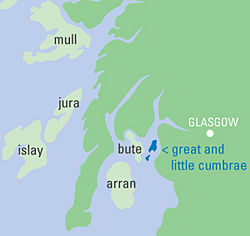 Map of the Firth of Clyde-area.

While anchored here, the Norwegian fleet was surprised by stormy weather. Five longships and a trading cog were driven ashore on the mainland by the storm. They were attacked with ranged weapons by a small number of Scots, but no serious fighting ensued.

The next day, October 2, King Håkon went ashore with some of his lendmenn, presumably to stave off further attacks until the stranded ships could be brought free. The lendmann Ogmund Crouchdance took control of a hill overlooking the beach with about 200 men, the force on the beach probably numbered about 600 more. During the day, a Scottish army approached. The saga states that the Scottish force included 500 knights in armor on horseback and a large body of foot soldiers, so that the Norwegians were outnumbered ten to one. If the saga is accurate, it would mean the Scottish army numbered about 8,000 men compared to the 800 Norwegian troops onshore.

King Håkon was transported to safety on board his ship. Ogmund Crouchdance's force on the hill started to retreat toward the beach in order not to be cut off. While retreating down the hill, they were attacked by the vanguard of the Scottish force. The retreat was in danger of becoming a rout, as the Norwegians on the beach started scrambling to get into their boats to get back to their ships, several boats sank as a result of overcrowding. However, the Norwegians managed to restore order in their ranks and make a stand on the beach. King Håkon was unable to send large reinforcements on land because of the storm, but one ship from the main fleet managed to reach the shore. When the ship arrived, the Scots withdrew back up the hill. There followed a lengthy long-distance battle, with bows and stone-throwing, but the Scottish force ultimately retreated, whereupon the Norwegians immediately boarded their boats and withdrew to the main fleet. The saga implies that the Scottish cavalry had not been in action, and it is also doubtful whether the full body of the foot soldiers was brought to bear. Similarly, the main body of the Norwegian force were on board their ships, prevented by the storm from joining battle. The Norwegians went back on land the day after to retrieve their dead and burn the stranded longships, which they were able to do unmolested. The saga names seven of the Norwegian casualties. It also names one dead Scottish knight, Perus, but also states that the Norwegians could not know how many Scots had been killed, as they had already retrieved their bodies. Within a few days, the Norwegian fleet left the Firth of Clyde. Reid suggests that "Perus" or "Ferus" may refer to someone called Fergus (Reid. 1990, 139). Or, he may have been one Sir Piers de Curry (Anderson 1859, 92).

Winter was approaching, the army was short of provisions, and with a large Scottish force intact on land, looting for provisions was not a tenable option. Håkon sailed North. His vassals, Magnus III and Dougal, went back to their own holdings, and Håkon went to Orkney for the winter. Most of his leidang-fleet sailed back to Norway. Largs had not been a crushing military defeat for Håkon, but it meant that he had not been able to win a decisive victory before the winter, something he would probably have had to do in order to achieve his objectives. As it was, it remains an open question whether Håkon would have been able to renew the fighting in the spring of 1264. He fell ill while staying in the Bishop's Palace in Kirkwall and died on December 15, 1263. The following year, King Alexander successfully invaded the Hebrides. In 1265 negotiations between Scottish envoys and Håkon's successor, King Magnus the Lawmender led to agreement that suzerainty over the Hebrides and Man was to pass to the Scottish king, in return for a lump sum of 4,000 marks and subsequently 100 marks annually in perpetuity. This was confirmed in the Treaty of Perth signed in 1266. Norway retained control over Orkney.

Scottish historians of later centuries grossly exaggerated the scale of the battle of Largs. George Buchanan in the sixteenth century claimed that the Norwegians had landed 20,000 men, of whom 16,000 had been killed along with 5,000 Scots (Linklater 1968, 38). Today, historians view the encounter as hardly a battle at all, but merely a skirmish. The main source to the battle is a lengthy passage in Håkon Håkonssons' saga[1] This saga was written on order of king Håkon's son Magnus, and so obviously presents the events purely from the Norwegian perspective. However, as it was written within five years of the events, and in all likelihood based on conversations with participants in the battle, it is considered a fairly reliable source as regards factual details. Interpretations of these facts have varied widely however, with the battle traditionally being seen as a Scottish victory in Scotland, and a Norwegian victory in Norway. Modern-day historians generally agree that the "battle" amounted to something of a draw. In the long run however, this result was satisfactory for the Scots, whereas the Norwegians needed to win. Effectively, Viking domination over Scotland had ended.

The Battle was the subject of an epic poetry by John Galt.[2] 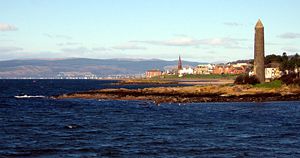 The Largs "Pencil" stands just over a mile (1.8 km) south of the town centre.

The battle is commemorated in modern-day Largs by a monument at the seafront, in the shape of a tall cylinder with a conical top akin to a Round Tower—inevitably, it is known as "The Pencil." Every September Largs holds a Viking festival which used to be a Scottish celebration of the defense of their land but has now been turned into a friendly celebration of both nations with dignitaries of Norway making regular attendances symbolizing friendship between the two countries (Wilson and Murphy 2004, 152).

The festival includes a parade, stalls, food, armory and a symbolic battle re-enactment of the landing of the Norwegians at the pencil. In 1912, the Battle of Largs Memorial was erected at Bowen Craig, paid for by public subscription. This is the traditional site of the fighting, although it may not mark the exact location.

The Battle itself has assumed an iconic significance in Scottish history that may rest on a somewhat shaky foundation. Anderson describes it as having been "famed in story, song and tradition" and as "the most memorable event in the reign of Alexander III" (Anderson 1859). Nonetheless, it was a turning point in the development of the Scottish nation. In the context of the life of Alexander III, the Battle was part of a strategy by which he successfully secured Scottish autonomy. On the other hand, his traders sold produce across Europe, so he did not isolate his small nation from the world beyond. This legacy informs a tendency for Scotland to see herself as a secure and stable base from which people can participate in a global community. When more people see themselves as members of an inter-dependent world, with common responsibilities for the welfare of all, humanity will shift from selfishly thinking about the interests of a few, to considering the needs of all.