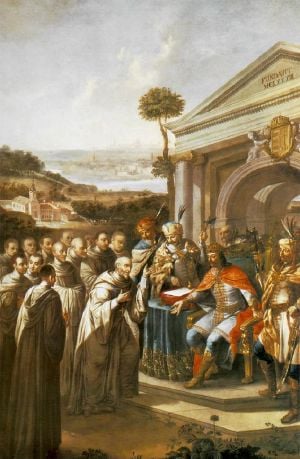 Béla III (Hungarian: III. Béla, Croatian: Bela II, Slovak: Belo III), (c. 1148 – April 23, 1196), king of Hungary and King of Croatia (1172–1196), Duke of Croatia and Dalmatia (1161–1163). He was educated in the court of the Byzantine Emperor Manuel I who was planning to ensure his succession in the Byzantine Empire till the birth of his own son. Following the death of his elder brother, who had been fighting against the Byzantine Empire, Béla could only ascend to the throne with the assistance of the Emperor Manuel I and Pope Alexander III, because a significant part of the Hungarian aristocracy led by his own mother and the Archbishop of Esztergom preferred his younger brother's succession.

Béla was one of the most powerful rulers of Hungary and he was also one of the most wealthy monarchs of Europe of his age. It was probably he who began to organize the Royal Chancellery in Hungary. Hungary occupied a strategic location between East and West. It would become a conflict zone between the European and Ottoman spaces. It would also serve as a cultural bridge between East and West. Béla III did much to build the nation's infrastructure, without which it could not have survived intact in what for much of the nation's history was a volatile geo-political location.

Béla was the second son of King Géza II by his wife Euphrosyne of Kiev. In 1161, his father granted him the Duchies of Croatia and Dalmatia as appanage, which was later confirmed by his brother, King Stephen III who ascended the throne after their father's death on May 31, 1162.

In 1164, the Byzantine Emperor Manuel I Komnenos concluded a treaty with King Stephen III, and according to the treaty, Béla was sent to Constantinople to be educated at the imperial court. The emperor, who had no legitimate sons, intended that Béla should marry his daughter, Maria Comnena, and eventually succeed him as Emperor. Béla received a Greek name, Alexius, and the newly created courtly title of despotes which enjoyed the highest position of honor below the emperor.

In 1164 and 1165, Béla followed the Emperor Manuel I on his campaigns against Hungary which aimed at the occupation of Béla's "paternal inheritance," i.e., Croatia, Dalmatia and the Szerémség. However, when King Stephen III transferred the three provinces to Manuel I, they were incorporated into the Byzantine Empire. In the autumn of 1165, Mánuel officially assigned his daughter and Béla as his heirs. In the beginning of 1166, Manuel I and Béla co-chaired the synod of the Byzantine Church in Constantinople.

When Alexius was born as a son of Manuel and his second wife Maria of Antioch in 1166, Béla's engagement to Maria was cancelled. Béla was deprived also of his title, and he was granted the lower title of kaisar. But Manuel helped negotiate another marriage for him, this time to Agnes of Antioch, who was the half-sister of Maria of Antioch; therefore by this marriage Manuel I and Béla became brothers-in-law.

After their marriage, Béla (Kaisar Alexius) and his wife went on a pilgrimage to Jerusalem where he made a donation for the Knights Hospitaller.

When his brother, King Stephen III died childless on March 4, 1172, Béla became his rightful heir. However, some barons preferred his younger brother, Géza, as did their mother Euphrosyne. Béla concluded an agreement with the Emperor Manuel, who provided him with a large amount of money, while he promised that he would never attack the Byzantine Empire during the reign of the emperor or his son.

When Béla arrived in Hungary, Lukas, Archbishop of Esztergom refused to crown him because he had given a present to the archbishop's envoy, and the archbishop considered the gift as an attempt at simony. Thus, Béla was obliged to seek assistance from Pope Alexander III, who authorized the Archbishop of Kalocsa to crown Béla on January 13, 1173.

Following his coronation, Béla had his brother arrested, but Géza managed to escape and fled to Austria. Henry II did not extradite Géza to Hungary; therefore Béla made an alliance with Duke Sobeslav II of Bohemia and they attacked Austria. Géza tried to flee to the court of Emperor Frederick I but he was arrested by the Czechs who gave him to Béla. In 1178, Béla provided assistance to the Duke of Bohemia to force back the attacks of the Duke of Austria.

Béla wanted to amend the administration of his kingdom and ordered that all the issues discussed by the king had to be put down in writing. This order led to the establishment of the Royal Chancellery in Hungary.

In 1179, after Archbishop Andrew of Kalocsa had insulted him, Béla persuaded Lukas, Archbishop of Esztergom to excommunicate him and he occupied the estates of the archdiocese. Shortly after, through the intercession of Pope Alexander III, Béla was reconciled with Archbishop Andrew.

After the death of Emperor Manuel I on September 24, 1180, Bela retook Croatia, Dalmatia and the Szerémség from the Byzantine Empire. In the same year, Zára refused allegiance to Venice and accepted his rule. In 1184, Béla occupied Beograd, Barancs and the valley of the Morava River which had been held by the Byzantine Empire. In 1185, Béla made peace with the new emperor, Isaac II Angelos, who married Béla's daughter Margaret and received the territories on the Morava River as her dowry.

After his first wife's death, Béla planned to marry Theodora Comnene, one of Emperor Manuel I's nieces, but the Byzantine Church prohibited their marriage. Thus, Béla married Marguerite of France, the sister of King Philip II of France and widow of Henry, the eldest son of King Henry II of England in 1186.

In 1188, Prince Vladimir II of Halych, who had been dethroned by his boyars, sought refuge in his court. Béla led his armies against Halych and occupied it, but afterwards he granted the principality to his second son, Andrew and he had prince Vladimir arrested.

On May 31, 1189, Béla welcomed Frederick I who was making his Crusade to the Holy Land, and on the emperor's request he set his brother, Géza free, who then left for the Byzantine Empire. Afterwards, when Emperor Frederick I entered into a controversy with Emperor Isaac II, Béla mediated between them. However, in the meantime Prince Vladimir II escaped from Hungary and he reoccupied his principality.

In the autumn of 1191, Béla had a meeting with his son-in-law, the Emperor Isaac II, whom he helped against Stefan Nemanja, the ruler of the Serbs.

Before his death, he took an oath to lead a Crusade to the Holy Land.

He was a powerful ruler, and his court was counted among the most brilliant in Europe. Hungary occupied a strategic location between east and West. It would become a conflict zone between the European and Ottoman spaces. It would also serve as a cultural bridge between East and West. Béla III did much to build the nation's infrastructure enabling it to survive intact in a volatile geo-political location.

His remains were confidently identified by archeologists during late nineteenth century excavations at the ruined cathedral of Székesfehérvár where the Árpád monarchs had been crowned and buried. Béla's exceptional height, as documented by contemporary sources, rendered the identification certain. Based on the examination of his skeleton, he must have been over two meters tall, a really outstanding height at that time. His remains were afterwards re-interred at the Mathias Church in Budapest, with those of his first wife Agnes.

Through his mother, Béla descended from Harold II of England (whose descendants had been dispossessed as a result of the Norman Conquest). Through his son, Andrew II, Béla was an ancestor of King Edward III of England. As a result, all subsequent English and British monarchs could claim descent from Harold II.