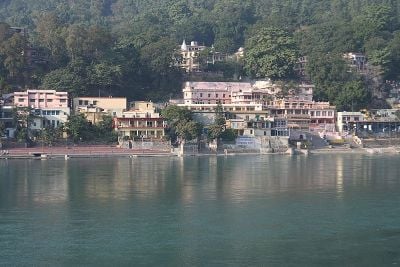 Sivananda Ashram in Rishikesh, the headquarters of Divine Life Society, founded by Sivananda Saraswati in 1936

Ashrama, in the Hindu religion (from Sanskrit āśramaḥ: meaning "penance, austerity"),[1] has a two-fold meaning: first, it refers to the doctrine of the "four stages of life" for a twice-born man laid out in the Manusmrti and later Classical Sanskrit texts; second, the word ashram may be used to denote a religious hermitage (spiritual retreat center), which provides refuge from life's distractions and tribulations. Traditionally, the word ashram was used within the context of the Hindu Law Books to elucidate the specific duties of a member of the Dvija (twice-born) castes (Brahmin, Kshatriya, and Vaishya). These castes are to undergo four periods of life: First, as a student (Brahmacharya); then, as a householder (Grihastha); then, he shall live in retirement (Vanaprastha); and finally, as an ascetic (Sanyasi). The Hindu texts (especially the Manusmriti) go into detail regarding what is expected of an individual during each stage.

According to the Hindu Ashrama system, the average human life was regarded as one hundred years, consisting of four periods of twenty-five years each. The goal of each period was the ideal fulfillment of four consecutive life stages that were tied to the four Purusartha (aims of life).[2] The Ashram system is believed by the Hindus to lead to a fulfillment of the Purushartha (four aims of life), namely Dharma (righteousness), Artha (wealth), Kama (desires, passions, emotions, drives), and Moksha (salvation). In Hinduism, the purusharthas are the canonical four ends or aims of human life.[3] These goals are, from lowest to highest:

Historically, the first three goals, dharma, artha, and kama, were articulated first (Sanskrit: Trivarga), and the fourth goal, moksha, later (Skt.: Chaturvarga). In living tradition, the notion of the four purusharthas represents an holistic approach to the satisfaction of a person's physical, emotional, and spiritual needs.

An Ashram is also a religious hermitage where sages seek to live in peace and tranquility amidst nature. Today, the term ashram is often used to refer to an intentional community formed primarily for the spiritual uplift of its members, often headed by a religious leader, swami, and guru.

Did you know?
The Sabarmati Ashram was one of the residences of Mahatma Gandhi

Sometimes, the word ashram is used as a synonym of matha (a cloister, institute, or college), but mathas are generally more hierarchical and rule-bound than ashrams, belonging to ancient orders of Hindu sadhus (Renunciants who are still searching for realization, as opposed to Rishis who have found it.)

Traditionally, ashrams were usually located far from human habitation, in forests or mountainous regions, amidst natural surroundings conducive to spiritual instruction and meditation. Spiritual and physical exercises, such as the various forms of Yoga, were regularly performed by the residents of an ashram. Other sacrifices and penances, such as Yajnas were also performed. Many Ashrams also served as Gurukuls or residential schools for children.

Ashrams have been a powerful symbol throughout Hindu history and theology. Most Hindu kings until the medieval ages were known to have had a sage who would advise the royal family in spiritual matters, or in times of crisis, who was called the Rajguru, which literally translates to "royal teacher." A world-weary emperor going to this guru's ashram, and finding solace and tranquility, is a recurring motif in many folktales and legends of ancient India. 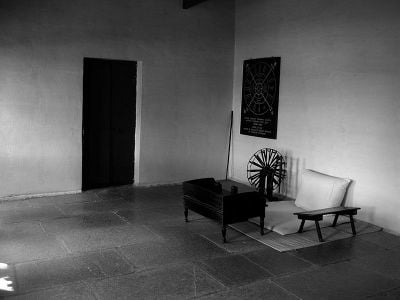 However, the goal of a pilgrimage to the ashram was not always tranquility, but instruction in some art, especially warfare. In the Hindu epic Ramayana, the protagonist princes of ancient Ayodhya, Rama and Laxman, go to the Rishi Vishvamitra's ashram to protect his Yajnas from being defiled by emissary-demons of Ravana. After they prove their mettle, the princes receive martial instruction from the sage, especially in the use of enchanted weapons, called Divyastras (Sanskrit Divya: Enchanted + Astra: Missile Weapon). In the Mahabharata, Lord Krishna, in his youth, goes to the ashram of Sage Sandiipanii, to gain knowledge of both intellectual and spiritual matters.

A number of Ashrams have been founded in India in the twentieth century, including, among others, the Sabarmati Ashram in Ahmedabad, which served as Mahatma Gandhi's headquarters during the long struggle for India's independence. Aurobindo Ashram was founded in Pondicherry by the Bengali revolutionary turned mystic Sri Aurobindo. Pujya Sant Sri Asaramji Bapu's Ashram was established on the banks of the Sabarmati River in Ahmedabad. There are many other ashrams that still exist in India and abroad.

Retrieved from https://www.newworldencyclopedia.org/p/index.php?title=Ashrama&oldid=1060000
Categories:
Hidden category:
This page was last edited on 8 November 2021, at 22:18.
Content is available under Creative Commons Attribution/Share-Alike License; additional terms may apply. See Terms of Use for details.