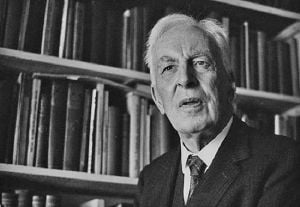 Arnold Joseph Toynbee CH (April 14, 1889 – October 22, 1975) was a British historian whose twelve-volume analysis of the rise and fall of civilizations, A Study of History, 1934-1961, was a monumental synthesis of world history, a metahistory based on universal rhythms of rise, flowering and decline, which examined history from a global perspective.

Toynbee approached history not from the perspective that takes the nation-state or ethnic groups as the unit of history, but from civilizations as a unit, taking into account of the roles of religious traditions world wide. Rejecting a natural deterministic view of Oswald Spengler (1880 – 1936), who similarly explained the rise and fall of civilization in The Decline of the West, Toynbee introduced the concept of challenge-response, how people responded the challenges they encountered determined the rise and fall of civilization. His perspective of history also impacted the philosophy of history.

Toynbee was the nephew of the economic historian Arnold Toynbee, with whom he is sometimes confused. Born in London, Arnold J. was educated at Winchester College and Balliol College, Oxford. He began his teaching career as a fellow of Balliol College in 1912, and thereafter held positions at King's College London (as Professor of Modern Greek and Byzantine History), the London School of Economics and the Royal Institute of International Affairs (RIIA) in Chatham House. He was Director of Studies at the RIIA between 1925 and 1955.

He worked for the Intelligence department of the British Foreign Office during World War I and served as a delegate to the Paris Peace Conference in 1919. With his research assistant, Veronica M. Boulter, who was to become his second wife, he was co-editor of the RIIA's annual Survey of International Affairs. In 1936 Toynbee was received in the Reichskanzlei by Adolf Hitler (cf. Acquaintances). During World War II, he again worked for the Foreign Office and attended the postwar peace talks.

His first marriage was to Rosalind Murray (1890-1967), daughter of Gilbert Murray, in 1913; they had three sons, of whom Philip Toynbee was the second. They divorced in 1946; Arnold then married Boulter in the same year.

Toynbee's ideas and approach to history

Toynbee's approach may be compared to the one used by Oswald Spengler in The Decline of the West. He rejected, however, Spengler's deterministic view that civilizations rise and fall according to a natural and inevitable cycle.

Toynbee presented history as the rise and fall of civilizations, rather than the history of nation-states or of ethnic groups. He identified civilizations according to cultural rather than national criteria. Thus, the "Western Civilization," comprising all the nations that have existed in Western Europe since the collapse of the Roman Empire, was treated as a whole, and distinguished from both the "Orthodox" civilization of Russia and the Balkans, and from the Greco-Roman civilization that preceded it.

With the civilizations as units identified, he presented the history of each in terms of challenge-and-response. Civilizations arose in response to some set of challenges of extreme difficulty, when "creative minorities" devised solutions that reoriented their entire society. Challenges and responses were physical, as when the Sumerians exploited the intractable swamps of southern Iraq by organizing the Neolithic inhabitants into a society capable of carrying out large-scale irrigation projects; or social, as when the Catholic Church resolved the chaos of post-Roman Europe by enrolling the new Germanic kingdoms in a single religious community. When a civilization responds to challenges, it grows. When it fails to respond to a challenge, it enters its period of decline. Toynbee argued that "Civilizations die from suicide, not by murder." For Toynbee, civilizations were not intangible or unalterable machines but a network of social relationships within the border and therefore subject to both wise and unwise decisions they made. If leaders of the civilization did not appease or shut down the internal proletariat or muster an effective military or diplomatic defense against potential invading outside forces, it would fall.

Toynbee's ideas have not seemed to be overly-influential on mainstream historians. Comparative history, to which his approach belongs, has been in the doldrums, partly as an adverse reaction to Toynbee.[1] The Canadian economic historian Harold Adams Innis is a notable exception. Following Toynbee and others (Spengler, Kroeber, Sorokin, Cochrane), Innis examined the flourishing of civilizations in terms of administration of empires and media of communication.

However, Toynbee's overall theory was taken up by some scholars, for example, Ernst Robert Curtius, as a sort of paradigm in the post-war period. Curtius wrote as follows in the opening pages of European Literature and the Latin Middle Ages (1953 English translation), following close on Toynbee, as he sets the stage for his vast study of medieval Latin literature. Not all would agree with his thesis, of course; but his unit of study is the Latin-speaking world of Christendom and Toynbee's ideas fed into his account very naturally:

How do cultures, and the historical entities which are their media, arise, grow and decay? Only a comparative morphology with exact procedures can hope to answer these questions. It was Arnold J. Toynbee who undertook the task. […] Each of these historical entities, through its physical and historical environment and through its inner development, is faced with problems of which it must stand the test. Whether and how it responds to them decides its destiny. […] The economic and social revolutions after the Second Punic War had obliged Rome to import great hordes of slaves from the East. These form an "inner proletariat," bring in Oriental religions, and provide the basis on which Christianity, in the form of a "universal church," will make its way into the organism of the Roman universal state. When after the "interregnum" of the barbarian migrations, the Greco-Roman historical entity, in which the Germanic peoples form an "outer proletariat," is replaced by the new Western historical entity, the latter crystallizes along the line Rome-Northern Gaul, which had been drawn by Caesar. But the Germanic "barbarians" fall prey to the church, which had survived the universal-state end phase of antique culture. They thereby forgo the possibility of bringing a positive intellectual contribution to the new historical entity. […] More precisely: The Franks gave up their language on the soil of Romanized Gaul. […] According to Toynbee, the life curves of cultures do not follow a fatally predetermined course, as they do according to Spengler.

Though the ideas Toynbee promoted enjoyed some vogue (he appeared on the cover of TIME Magazine in 1947), they may have been early casualties of the Cold War's intellectual climate. Toynbee was attacked on numerous fronts in two chapters of Walter Kaufmann's From Shakespeare to Existentialism (1959). One of the charges was that "…Toynbee's huge success is confined to the United States where public opinion is heavily influenced by magazines …" (426); another was his focus on groups of religions as the significant demarcations of the world (408), as of 1956. Rightly or not, critics attacked Toynbee's theory for emphasizing religion over other aspects of life when assessing the big pictures of civilizations. In this respect, the debate resembled the contemporary one over Samuel Huntington's theory of the so-called "clash of civilizations."

Toynbee's approach - criticized as "metaphysical speculations dressed up as history" [2] - was subjected to a critique by Pieter Geyl. Toynbee engaged in the public dialogue, which appeared in print (1949, reprinted in 1968) in The Pattern of the Past: Can We Determine It? This book linked essays by Toynbee and Geyl to an analysis of Toynbee's philosophy of history, contributed by Pitirim A. Sorokin.

The social scientist Ashley Montagu assembled 29 other historians' articles to form a symposium on Toynbee's A Study of History, published as Toynbee and History: Critical Essays and Reviews (1956). The book includes three of Toynbee's own essays: What I am Trying to Do (originally published in International Affairs 31 (1955); What the Book is For: How the Book Took Shape (a pamphlet written upon completion of the final volumes of A Study of History) and a comment written in response the articles by Edward Fiess and Pieter Geyl, (originally published in Journal of the History of Ideas 16 (1955).)

In an essay titled The Chatham House Version (1970), Elie Kedourie of the London School of Economics, a historian of the Middle East, attacked Toynbee's role in what he saw as an abdication of responsibility of the retreating British Empire, in failing democratic values in countries it had once controlled. Kedourie argued that Toynbee's whole system and work were aimed at the British imperial role.

A Study of History

Toynbee applies his model to each of these civilizations, painstakingly detailing the stages through which they all pass: genesis, growth, time of troubles, universal state, and disintegration.

He argues that the breakdown of civilizations is not caused by loss of control over the environment, over the human environment, or attacks from outside. Rather, it comes from the deterioration of the "Creative Minority," which eventually ceases to be creative and degenerates into merely a "Dominant Minority" (who forces the majority to obey without meriting obedience). He argues that creative minorities deteriorate due to a worship of their "former self," by which they become prideful, and fail to adequately address the next challenge they face.

He argues that the ultimate sign a civilization has broken down is when the dominant minority forms a "Universal State," which stifles political creativity. He states:

First the Dominant Minority attempts to hold by force—against all right and reason—a position of inherited privilege which it has ceased to merit; and then the Proletariat repays injustice with resentment, fear with hate, and violence with violence when it executes its acts of secession. Yet the whole movement ends in positive acts of creation—and this on the part of all the actors in the tragedy of disintegration. The Dominant Minority creates a universal state, the Internal Proletariat a universal church, and the External Proletariat a bevy of barbarian war-bands.

He argues that in this environment, people resort to archaism (idealization of the past), futurism (idealization of the future), detachment (removal of oneself from the realities of a decaying world), and transcendence (meeting the challenges of the decaying civilization with new insight, as a Prophet). He argues that those who Transcend during a period of social decay give birth to a new Church with new and stronger spiritual insights, around which a subsequent civilization may begin to form after the old has died.

Toynbee's use of the word 'church' refers to the collective spiritual bond of a common worship, or the same unity found in some kind of social order.

Many concepts Toynbee discussed become part of the political vocabulary only decades later; here is a sampling of a few:

The three sets of lectures published separately in the UK in 1962 appeared in New York in the same year in one volume under the title America and the World Revolution and Other Lectures, Oxford University Press.