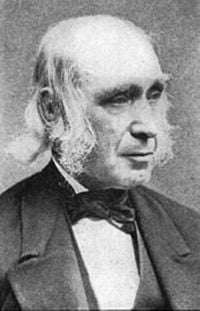 Amos Bronson Alcott (November 29, 1799 – March 4, 1888) was an American writer, philosopher, and educator. He is best remembered for founding a short-lived and unconventional "Temple School" in Boston, as well as the utopian community known as "Fruitlands." He was also notably associated with transcendentalism, writing a series known as "Orphic Sayings," which were originally published in the journal Dial. Believing that education should nourish and stimulate the body, mind, and spirit of students, Alcott gave great importance to the teaching of morality and aesthetics, as well as more traditional academic subjects and physical activities. His thought was overly mystical and too vague to achieve popularity, and his schools foundered. However, his ideas on education inspired and informed many later pedagogues. As human beings advance toward achieving their true potential, Alcott's ideas may prove to contain valuable insights into the education of future generations.

Amos Bronson Alcott was born on Spindle Hill in the town of Wolcott, Connecticut, on November 29, 1799. His father, Joseph Chatfield Alcox, was a farmer and mechanic whose ancestors, then bearing the name of Alcocke, settled in eastern Massachusetts in colonial days. The son adopted the spelling "Alcott" in his early youth.

Self-educated and thrown upon his own resources at an early age, Alcott began to earn his living by working in a clock factory in Plymouth, Connecticut in 1814, and for many years after 1815, peddled books and merchandise, chiefly in the southern states. He began teaching in Bristol, Connecticut in 1823, and subsequently established schools in Cheshire, Connecticut from 1825–1827, in Bristol from 1827–1828, in Boston, Massachusetts from 1828–1830, in Germantown, now part of Philadelphia, Pennsylvania, from 1831–1833, and in Philadelphia in 1833. As a young teacher, he was most influenced by the educational philosophy of the Swiss pedagogue Johann Heinrich Pestalozzi.

In 1830, Alcott married Abby May, the sister of Samuel J. May, the reformer and abolitionist. Alcott himself was a Garrisonian abolitionist, and pioneered the strategy of tax resistance to slavery that Thoreau made famous in Civil Disobedience. Alcott publicly debated with Thoreau over the use of force and passive resistance to slavery. Along with Thoreau, he was among the financial and moral supporters of abolitionist John Brown and occasionally helped fugitive slaves escape on the Underground Railroad.

In 1834, Alcott opened his famous "Temple School" in Boston, in which he applied his unique methods of education. The school operated for five years, during which Alcott attracted many supporters, but even more enemies. His methods were too radical, and in the end were not well received. The school was closed in 1839.

In 1840, Alcott moved to Concord, Massachusetts. After a visit to England in 1842, with two English associates, Charles Lane and Henry C. Wright, he started "Fruitlands," in the town of Harvard, Massachusetts. This was a utopian socialist experiment in farm living and nature meditation as tending to develop the best powers of body and soul. The experiment quickly collapsed, and Alcott returned in 1844 to his Concord home "Hillside" (later renamed "The Wayside"), near that of Ralph Waldo Emerson. Alcott returned to Boston four years later, and back to Concord after 1857, where he and his family lived in the Orchard House until 1877.

Alcott continued to deliver speeches before the "lyceums," then common in various parts of the United States, and addressed groups of hearers when they invited him. In his last years, his daughter, the writer Louisa May Alcott, provided for him. He was the nominal, and at times the actual head of a summer "Concord School of Philosophy and Literature," which had its first session in 1879 in a building next to his house. There, he held conversations and invited others to give lectures during a part of several successive summers, on many themes in philosophy, religion, and letters.

Suffering a stroke in 1882, Alcott continued to live, unable to write and barely able to talk, for six more years in his daughter’s home in Boston. He died there on March 4, 1888.

In 1834, Alcott opened the "Temple School" in Boston, named because it was located in a Masonic Temple building. The school was briefly famous, but then became infamous, because of Alcott’s original methods of education. Alcott's plan was to develop self-instruction on the basis of self-analysis, with an emphasis on conversation and questioning rather than on lecture and drill, which was prevalent in U.S. classrooms of the time. Alongside writing and reading, he gave lessons in "spiritual culture" which often involved the Gospels.

Alcott refused corporal punishment as a means of disciplining his students; instead, he offered his own hand for an offending student to strike, saying that any failing was the teacher's responsibility. The shame and guilt this method induced, he believed, was far superior to the fear instilled by corporal punishment; when he used physical "correction" he required that the students be unanimously in support of its application, even including the student to be punished.

In the spirit of transcendentalism, Alcott believed that all knowledge and moral guidance are a consistent part of the inner self of every human being. The teacher’s role is thus to help children unfold that knowledge in a beneficiary way. Alcott refused traditional educational methods that existed in most of the American schools at the time, which emphasized memorization and discipline. He believed that human beings are born good and that educators needed to give freedom to children to express their inner potential. Educators should facilitate children’s mental, moral, spiritual, aesthetic, and physical growth. He emphasized the need to nourish both the mind and body, so he practiced organized play and gymnastics in his classes.

Alcott emphasized that the key to social reform and spiritual growth started in one's home—in the family. Children learn essential values at an early age, and family plays a key role there. He believed that the family teaches self-sacrifice, self-reliance, sense of duty, and charity—values that are very important in daily life.

As assistants at the Temple School, Alcott had two of nineteenth-century America's most talented women writers, Elizabeth Peabody (who published A Record of Mr. Alcott's School in 1835) and more briefly Margaret Fuller. As students, he had the children of the Boston intellectual classes, including Josiah Quincy, grandson of the president of Harvard University. Alcott's methods were not well received; many readers found his conversations on the Gospels close to blasphemous. A few brief but frank discussions of birth and circumcision with the children were considered obscene, and many in the public found his ideas ridiculous. For instance, the influential conservative Unitarian Andrews Norton derided Alcott’s methods as one-third blasphemy, one-third obscenity, and the rest nonsense.

The school was widely denounced in the press, with only a few scattered supporters, and Alcott was rejected by most public opinion. Alcott became increasingly financially desperate as the controversy caused many parents to remove their students from his school. Finally, Alcott alienated many of the remaining parents by admitting an African American child to the school, which he then refused to expel from his classes. In 1839, the school was closed, although Alcott had won the affection of many of his pupils.

Alcott gave numerous lectures and public speeches. These "conversations," as he called them, were more or less informal talks on a great range of topics, spiritual, aesthetic, and practical, in which he emphasized the ideas of the school of American transcendentalists led by Ralph Waldo Emerson, who was always his supporter and discreet admirer. He often discussed Platonic philosophy, the illumination of the mind and soul by direct communion with spirit; upon the spiritual and poetic monitions of external nature; and upon the benefit to man of a serene mood and a simple way of life.

Alcott's philosophical teachings were often thought to be inconsistent, hazy, or abrupt. He formulated no independent system of philosophy, and was heavily influenced by Plato, German mysticism, and Immanuel Kant as filtered through Samuel Taylor Coleridge. Like Emerson, Alcott was always optimistic, idealistic, and individualistic in thinking. Of the contributors to the transcendentalist journal Dial, Alcott was the most widely mocked in the press, chiefly for the high-flown rhetoric of his "Orphic Sayings."

Alcott published several major books, all later in life, including Tablets (1868), Concord Days (1872), and Sonnets and Canzonets (1882). Earlier, he had written a series of "Orphic Sayings" which were published in the journal Dial, as examples of transcendentalist thought. The sayings, though called oracular, were considered sloppy or vague by contemporary commentators. He left a large collection of journals and memorabilia, most of which remain unpublished.

As a philosopher, Alcott was overly mystical. He seemed incapable of expressing clear ideas, and his ideas were often impenetrable. He thus failed to generate a wider group of followers and after his death, largely fell into oblivion.

On the other hand, as a teacher, he initiated a radical and highly influential rethinking of education. His school experiment unfortunately ended in failure, but his ideas did not. His pedagogy was a forerunner of progressive education and democratic schooling. His school in Boston's Masonic Temple can be considered the first progressive school in America.