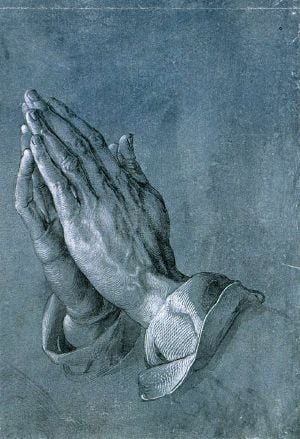 The word "Amen" is often said at the end of religious prayers. Painting by Albrecht Dürer.

The word Amen (Hebrew: אמן, meaning "Firm" or "Verily," Arabic آمين ’Āmīn) is a declaration of positive affirmation found in the Hebrew Bible, the New Testament, and in the Holy Qur'an. English translations of the word include, "So be it," "Truly," and "Let it be." Colloquially, it can also mean "I agree," or "Well said."

The word is widely used in Christianity, Judaism and Islam. Muslims say "Amen" (or, more correctly, Āmīn) as the standard ending to the Dua (Supplication). For Jews and Christians of different denominations, the term "Amen" is often adopted in worship and hymns as a conclusion to prayers, or as a jubilant response to a sermon.

For billions of people around the world, the word "Amen" affirms their connection with God. It therefore brings comfort, peace and solace. Just as there are different types and forms of prayer (for example; petitionary prayer and prayer of thanksgiving), the word "Amen" can be expressed internally or externally, in public or in private.

Jews usually pronounce the word as it is pronounced in Hebrew: "ah-MAIN."

Amen is derived from the Hebrew word emuna or "faith" with the same linguistic root, implying that one is affirming with, and of, "the faith" of Judaism (and its belief in Monotheism). Some Judaism have seen in the word Amen acronym for אל (’El) מלך (melek) נאמן (ne’eman), meaning "God, King [who is] Trustworthy."

In traditional and modern Jewish liturgy, "Amen" is often used by a congregation as a way to affirm and subscribe to the words uttered previously by whomever leads the prayer.

In the Book of Revelation, Jesus calls himself "the Amen, the faithful and true witness" (Revelation 3:14). The uses of amen in the Gospels is notable because Jesus used the word to affirm his own utterances, not those of another person, and this usage was adopted by the church :

"The liturgical use of the word in apostolic times is attested by the passage from 1 Corinthians.... Justin Martyr (c. 150) describes the congregation as responding "amen," to the benediction after the celebration of the Eucharist. Its introduction into the baptismal formula (in the Greek Orthodox Church it is pronounced after the name of each person of the Trinity) is probably later. Among certain Gnostic sects Amen became the name of an angel and in post-biblical Jewish works exaggerated statements are multiplied as to the right method and the bliss of pronouncing it."[1]

In the King James Bible, the word amen is preserved in a number of contexts. Notable ones include:

Muslims use the word "Āmeen" not only after reciting the first surah (Al Fatiha) of the Qur'an, but also when concluding a prayer or 'Dua'.

Retrieved from https://www.newworldencyclopedia.org/p/index.php?title=Amen&oldid=1052806
Categories:
Hidden category:
This page was last edited on 17 May 2021, at 14:26.
Content is available under Creative Commons Attribution/Share-Alike License; additional terms may apply. See Terms of Use for details.