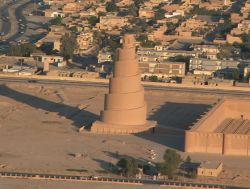 The Minaret of the Great Mosque, Samarra commissioned by Al-Mutawakkil in 848 and completed in 852 with part of the mosque visible to the right.

Al-Mutawakkil ˤAlā Allāh Jaˤfar ibn al-Muˤtasim (Arabic المتوكل على الله جعفر بن المعتصم; March 821 – December 861) was the tenth Abbasid caliph who reigned in Samarra from 847 until 861. He succeeded his brother al-Wāthiq and is known for putting an end to the Mihna "ordeal," the Inquisition-like attempt by his predecessors to impose a single Mu'tazili version of Islam. On the one hand, he patronized scholars and commissioned the Great Mosque at Samarra. On the other hand, he is known for imposing severe restrictions on Jews and Christians who had thrived under the previous caliphs, contributing to intellectual life and occupying significant posts.

Despite Al-Mutawakkil's somewhat abusive rule, which lacked the generosity and piety of his brother and the intellectual openness of his predecessors, the caliphate had already developed a certain aura and mystique that enabled it to survive, fulfilling an important symbolic role. Even when, less than a hundred years after his death, the caliphate became a titular symbolic office, the Muslim world maintained a strong sense of unity, while the life experience of Muslims was similar regardless of where they lived. The legal system was more or less the same throughout the territory of which the caliph was, if only nominally, the head. At its best, the caliphate was an attempt to create a single, God-fearing community of all mankind. To a degree, it sometimes succeeded. Al-Mutawakkil may not have contributed much to this success but nor did he undermine the office so seriously that it came to an end, at least not for a very long time.

Al-Mutawakkil succeeded his brother, who died on August 10, 847 before he could nominate a successor. Muir points out that "The 'Abbasid Caliphs" at this point were "no longer known by their proper names, but by their royal title signifying some attribute of faith or trust in the Almighty as here, Al-Mutawakkil, or "He that putteth his trust (in the Lord)." This remained "so with all the future names."[1]

While al-Wathiq was caliph, his vizier, Muhammad ibn Abd al-Malik, had treated al-Mutawakkil. On September 22, 847, al-Mutawakkil had him arrested. The former vizier's property was plundered and he was tortured in his own iron maiden. He finally died on November 2. The caliph also punished others who had mistreated him during the previous reign.

In A.H. 235 (849) al-Mutawakkil had the prominent Turkish military commander Itakh al-Khazari seized in Baghdad for forgetting himself during a drinking session and falling heavily onto the caliph.[2] Itakh was imprisoned and died of thirst on December 21. One Mahmud ibn al-Faraj al-Naysaburi arose claiming to be a prophet. He and some followers were arrested in Baghdad. He was imprisoned, beaten and on June 18, 850 he died. Itakh was replaced as Governor of Egypt by al-Mutawakkil son, Al-Muntasir.

In A.H. 240 (854-855) the police chief in Hims killed a prominent person stirring an uprising. The chief was eventually driven out. Al-Mutawakkil offered another police chief, and when the next year saw a revolt against this new police chief, al-Mutawakkil had this firmly suppressed. As Christians had joined in the second round of disturbances, the caliph had Christians expelled from Hims.

Also in 241 occurred the firm response to the revolt by the Bujah, people of African descent just beyond Upper Egypt. They had been paying a tax on their gold mines. They ceased paying this, drove out Muslims working in the mines and terrified people in Upper Egypt. Al-Mutawakkil sent al-Qummi to restore order. Al-Qummi sent seven ships with supplies that enabled him to persevere despite the very harsh terrain of this distant territory. He retook the mines, pressed on to the Bujah royal stronghold and defeated the king in battle. The Bujah resumed payment of the tax.[3]

On February 23, 856, there was an exchange of captives with the Byzantines. A second such exchange took place some four years later.

Al-Mutawakkil continued to rely on Turkish statesmen and slave soldiers to put down rebellions and lead battles against foreign empires, notably the Byzantines, from who Sicily was captured. His vezir, Al-fath bin Khaqan, who was Turkish, was a famous figure of Al-Mutawakkil's era.

His reliance on Turkish soldiers would come back to haunt him. Al-Mutawakkil would have his Turkish commander-in-chief killed. This, coupled with his extreme attitudes towards the Shi'a, made his popularity decline rapidly.

Al-Mutawakkil was murdered by a Turkish soldier on December 11, 861 C.E. Some have speculated that his murder was part of a plot hatched by his son, al-Muntasir, who had grown estranged from his father. Al-Muntasir feared his father was about to move against him and struck first.

Al-Mutawakkil is said to have been slender, with a light tan complexion, a sparse beard and attractive eyes.[4]

Al-Mutawakkil was unlike his brother and father in that he was not known for having a thirst for knowledge although like them he did patronize scholars. What he did have was an eye for magnificence and a hunger to build. The Great Mosque of Samarra was at its time, the largest mosque in the world; its minaret is a vast spiraling cone 55 m high with a spiral ramp. The mosque had 17 aisles and its wall were paneled with mosaics of dark blue glass. It was commissioned in 848 and completed in 852.

The Great Mosque was just part of an extension of Samarra eastwards that built upon part of the walled royal hunting park inherited from the Sassanians. Al-Mutawakkil built as many as 20 palaces (the numbers vary in documents). Samarra became one of the largest cities of the ancient world; even the archaeological site of its ruins is one of the world's most extensive. The Caliph's building schemes extended in A.H. 245 (859-860) to a new city, al-Jaˤfariyya, which al-Mutawakkil built on the Tigris some 18 kilometres from Samarra. More water, and al-Mutawakkil ordered a canal to be built to divert water from the Tigris, entrusting the project to two courtiers, who ignored the talents of a local engineer of repute and entrusted the work to al-Farghanī, the great astronomer and writer. Al-Farghanī, who was not a specialist in public works, made a miscalculation and it appeared that the opening of the canal was too deep so that water from the river would only flow at near full flood.

News leaked to the infuriated caliph might have meant the heads of all concerned save for the gracious actions of the engineer, Sind ibn ˤAlī, who vouched for the eventual success of the project, thus risking his own life. Al-Mutawakkil was assassinated shortly before the error became public.

In 244, Al-Mutawakkil shifted the capital from Samarra to Damascus but only remained there for two months.

Al-Mutawakkil was keen to involve himself in many religious debates, something that would show in his actions against different minorities. His father had tolerated the Shīˤa Imām who taught and preached at Medina, and for the first years of his reign al-Mutawakkil continued the policy. Imām ˤAlī al-Hadī's growing reputation inspired a letter from the Governor of Medina, ˤAbdu l-Lāh ibn Muħammad, suggesting that a coup was being plotted, and al-Mutawakkil extended an invitation to Samarra to the Imām, an offer he could not refuse. In Samarra, the Imām was kept under virtual house arrest and spied upon. However, no excuse to take action against him ever appeared. After al-Mutawakkil's death, his successor had the Imām poisoned: al-Hadī is buried at Samarra. The general Shīˤa population faced repression. This was embodied in the destruction of the shrine of Hussayn ibn ˤAlī, an action that was carried out to stop pilgrimages to that site.

During his reign, the influence of the Muˤtaziliyya was reversed and questions about the divinity of the Qur'an ended. This resulted from the caliph's personal devotion to studying as-Sunna.

Also during his reign, Al-Mutawakkil met the famous Byzantine theologian Constantine the Philosopher, who was sent to tighten the diplomacy diplomatic relations between the Empire and the Caliphate in a state mission by the Emperor Michael III.

He is also remembered for reversing the tolerant attitude towards Christians and Jews, and requiring them to wear distinctive dress. In 850, he decreed that all "people of the book" must wear "honey-colored" hats and belts, churches and synagogue built "after the advent of Islam were to be destroyed," one-tenth of their property confiscated and government posts were closed to them.[5] There is, however, according to Cohen no evidence of persecution. Nor is it known how widely these measures were implemented. Yeʼor disagrees, referring to "a wave of ... persecution" and destruction of places of worship during his caliphate.[6] She says that he tripled the poll-tax and pillages churches for their wealth.

When Al-Mutawakkil began to show favor to his second son, his oldest son Al-Muntasir grew resentful. When, having drunk too much wine, Al-Mutawakkil over-abused him one day, Al-Muntasir persuaded the alienated Turkish Guards to assassinate him. Some senior Turks had been dismissed and their property had been confiscated and given to Al-Mutawakkil's newest favorites. He was killed on December 11, 861.[7]

According to William Muir, he sold offices of state to the highest bidder.[8] Muir comments, "Praise given by the annalists to this reign of 15 years for the Caliph's return to orthodoxy and generous patronage of poets and men of learning, makes but sorry amends for a life of cruel tyranny, bigotry, and self-indulgence."[9]

Al-Mutawakkil's reign is depicted in Tabari as the part of the Caliphates "Incipient decline." Within less than a hundred years of his assassination, effective power would pass to the Shi'a Buyid dynasty. Yet despite his somewhat abusive rule, which lacked the generosity and piety of his brother and the intellectual openness of his predecessors, the caliphate had already developed a certain aura and mystique that enabled it to survive, fulfilling an important symbolic role.

Even when the caliphate became a titular, symbolic office, the Muslim world maintained a strong sense of unity, while the life experience of Muslims was similar regardless of where they lived. The legal system was more or less the same throughout the territory of which the caliph was, if only nominally, the head. At its best, the caliphate was an attempt to create a single, God-fearing community of all mankind. To a degree, it sometimes succeeded.

Retrieved from https://www.newworldencyclopedia.org/p/index.php?title=Al-Mutawakkil&oldid=1052135
Categories:
Hidden category:
This page was last edited on 30 April 2021, at 05:22.
Content is available under Creative Commons Attribution/Share-Alike License; additional terms may apply. See Terms of Use for details.