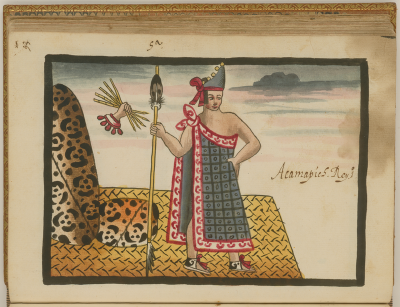 Acamapichtli, the First Aztec King, as depicted in the Tovar Codex

The culture of the Aztecs was warlike and expanding the empire was part of the leader's role; but the way in which war was conducted was different from that of the Spanish, who ultimately conquered and ransacked the empire. The aim of conquest was not to destroy and plunder but to integrate conquered people within the society, to the benefit of all through increased productivity. A reading of history that sees the rise of empires that unite different people across lines that previously divided them would evaluate the first Aztec ruler's contribution to humanity as on balance a positive one, since aspects of the Aztec legacy continue to be of value today, especially its sensitivity towards the human-environmental relationship as one of interdependence.

Acamapichtli was not a native of Tenochtitlan. Blood relationships between rulers were an important aspect of politics in fourteenth-century Mexico, and as relative newcomers, the Mexica were at a disadvantage. Although the Culhua had only recently ejected the Mexica from Tizaapan, some intermarriage had taken place between the two peoples during their period of association. Acamapichtli was the product of one such union. His father, Opochtzin, was a Mexica leader, while his mother Atotoztli was the daughter of the Culhua tlatoani, Nauhyotl. He also had ties to the Acolhua of Coatlinchan. He is said to have been descended from the Toltecs, who dominated Central America between the tenth and twelfth centuries. The Toltecs, like the Aztecs, spoke Nahuatl and shared many religious and cultural traditions.

On the death of Tenoch, the previous ruler, in 1375, the elders of the Tenochca calpulli (council) decided to elect a tlatoani who could secure the fledgling city's position through ties to powerful groups in the region. The council appears to have made an inspired choice, since Acamapichtli fulfilled the position with skill and considerably extended the power of the city. The council has been compared to the Roman Senate in terms of its authority and membership, which consisted of the most powerful individuals, often representing families. However, anyone could be elevated to membership if they performed great deeds. Thus, the Aztec system has been described as quasi democratic, while the colonial rule that replaced it after the Spanish conquest of 1521 was a totalitarian regime.

Acamapichtli forged political alliances through strategic marriages, perhaps as many as twenty. He was regarded as a descendant of the god Quetzalcoatl and also performed certain religious duties, such as rain making and sacrifices. However, belief in his divinity may have developed after his death. He was called the “invincible warrior.”

The myth of Quetzalcoatl, and many other Aztec religious beliefs, originated with the Toltecs. As the empire expanded, it absorbed many of the deities of subject peoples into the Toltec-Aztec pantheon, though conquered peoples were required to offer tribute to the sun god. The link with the Toltecs made Acamapichtli's blood line especially prestigious, as they were renowned warriors. To integrate these ties with the city of Tenochtitlan, Acamapichtli took a wife from each Tenochca calpulli (in addition to his first wife, the Culhua noble Ilancuetl). In the same year, Tenochtitlan's sister city of Tlatelolco also installed an outsider as tlatoani, from the other major power in the region—Cuacuapitzahuac, son of Tezozomoc, tlatoani of the Tepanec city of Azcapotzalco.

Despite Acamapichtli's Culhua ancestry, his city rapidly fell into the Tepanec orbit and became a tributary of Azcapotzalco. During his reign, Tenochca forces fought for Azcapotzalco against various city states, notably Chalco, and were eventually allowed to wage war on their own. Expeditions were sent against Cuauhnahuac (modern Cuernavaca) and Xochimilco.

Built in the middle of Lake Texcoco, Tenochtitlan suffered from limited farmland. Acamapichtli built up the city's agricultural base by expanding the chinampa system (floating gardens) around the island, and by capturing lakeshore chinampas from other cities, particularly Xochimilco. This ingenious farming system transformed a poor agricultural base into a highly productive one. He also made improvements to the city's architecture—the earliest excavated level of the Great Pyramid of Tenochtitlan, Temple II, dates to his reign.

Although tlatoani was not strictly a hereditary title but an elected office, candidates were clearly restricted to a small class of princes, and all later rulers of Tenochtitlan descended from Acamapichtli. On his death he was succeeded as by his son, Huitzilihuitl. A younger son by a Tepanec wife, Itzcoatl, would become tlatoani in 1427.

Relatively little detail is known about Acamapichtli's life, his legacy lived on through the successive rulers of the empire (more properly a confederacy) and in the rich culture and wealth of the Aztec civilization which, in large measure, he founded. While the practice of human sacrifice represents a moral blemish, many aspects of Aztec life remain of interest today, such as the high value placed on family as the baseline of society, the formation of a sophisticated imperial administration, the establishing of trade networks as well as a tribute system, and the creation of an agricultural system that respected the land and also the relationship between nature and humanity (as interdependent).